A history of dramatic leadership reviews in Canadian politics

Tom Mulcair is the first federal leader to fail a confidence vote, but he's not the first to produce drama at his leadership review

OTTAWA – On Sunday, Tom Mulcair became the first federal leader to fail a confidence vote by his own party faithful.

Just 48 per cent of delegates to the NDP’s convention in Edmonton supported keeping Mulcair at the helm after he led the party to a disappointing third-place finish in last fall’s election; 52 per cent voted to hold a leadership contest to replace him.

But Mulcair is not the only leader to be burned by a leadership review. Others who’ve scored better results have still been forced out by a process that University of Saskatchewan political science professor John Courtney has said “invites dissension” and is “inherently destabilizing” for any political party.

The NDP conducts such votes at every convention, though they rarely generate the kind of tension attending this one.

Both the Liberals and Conservatives put their leaders to similar tests — but only at the first national convention following an election in which the leader does not become prime minister. Some provincial parties also subject their leaders to leadership reviews.

Herewith, with the help of Courtney, a brief history of leadership reviews and some of the most dramatic moments they’ve produced. 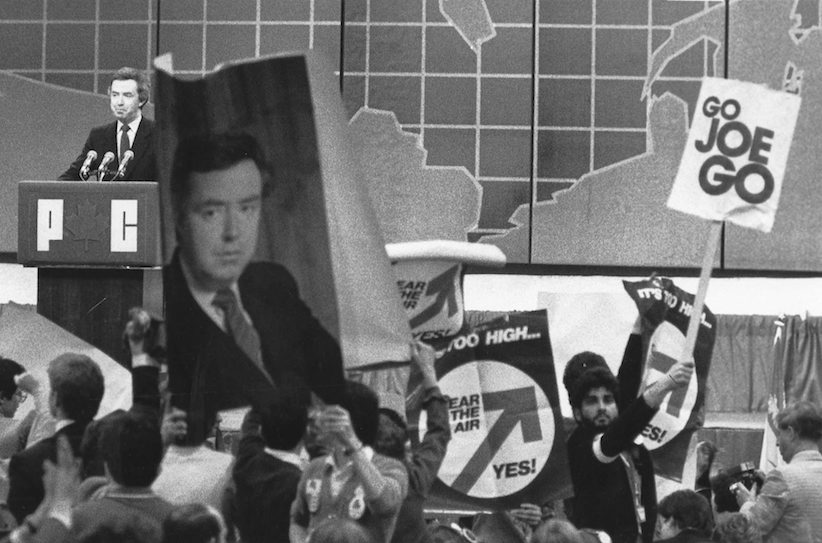 Joe Clark is interrupted by delegates at the Conservative convention in Winnipeg, January 28, 1983, as he makes his speech on the leadership review. (CP PHOTO/Peter Bregg)

— The Liberal Party of Canada was the first to adopt a leadership review process, in 1966, with the implicit understanding that it would not be used until after then-leader Lester Pearson stepped down. That process was first employed in 1970, when Pierre Trudeau’s leadership was handily endorsed.

— Also in 1966, the Progressive Conservatives were waging a bitter internal war over John Diefenbaker’s leadership. Dalton Camp ran for party president on the promise that he’d hold a leadership convention within a year. He won, the leadership convention was held in 1967 (electing Robert Stanfield). Leadership reviews were entrenched in the party’s constitution in 1969.

— 1983, Progressive Conservative leader Joe Clark’s leadership is endorsed by 66.9 per cent of delegates, with 33.1 per cent voting for a leadership convention. Clark decides that’s insufficient to silence his critics within the party and resigns. He runs in the subsequent leadership race but loses to Brian Mulroney.

— 1986, Liberal leader John Turner faces a vigorous effort to dump him, led in part by supporters of Jean Chretien, runner-up to Turner in the party’s 1984 leadership race. An organized campaign, dubbed the Friends of John Turner, spends almost a full year and pulls out all the stops to win the leadership review. Turner is endorsed by 76 per cent of delegates, remaining leader until 1990.

— August 2002, Liberal leader and prime minister Chretien announces his intention to retire in 18 months, heading off a potentially humiliating result in a leadership review scheduled for February 2003. The party, controlled by erstwhile leadership rival Paul Martin at the time, eventually pressures him to move up his retirement date to November 2003.

— 2005, Parti Quebecois leader Bernard Landry quits in a huff during a party convention after winning a 76-per-cent endorsement, which he deems insufficient.

— 2006, Alberta premier and Conservative leader Ralph Klein is endorsed by just 55 per cent of delegates, even though he’d previously announced his intention to retire in 2008. He resigns a few months later.