A letter from Alberta to my Quebec friends

Jason Markusoff: You're a too-convenient target. There's too much overheated political rhetoric about Alberta deficits and Quebec daycare provisions (which have nothing to do with equalization's formula) 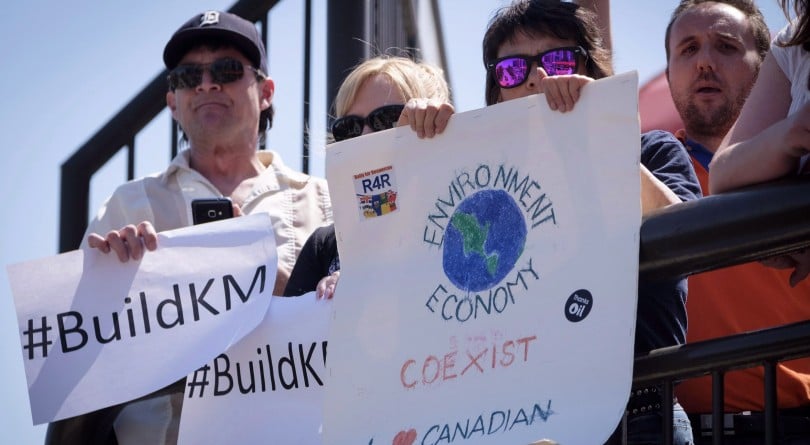 You may have heard about one of our many recent pro-pipeline rallies, where Calgary Mayor Naheed Nenshi began to speak to the crowd in French. The crowd quickly interrupted with boos and heckles, until an organizer pleaded for politeness. At the same event, demonstrators jeered a city councillor when he suggested listeners show pro-trade goodwill and buy Quebec dairy products. “Wow. Really? And you guys call yourselves Canadians?” he replied.

It’s a question you may also ask in response—swift hostility by Albertans at the mere mention of Quebec products or its official language. Frankly, it’s jarring for many Albertans to see that, too, reviving the angry redneck stereotype. But there’s been a lot lately that’s jarred Albertans and made residents feel besieged.

Normally, Quebec culture gets much love  in Alberta. Canadiens jerseys come out in force whenever they play our arenas; the Habs were the western favourite before the Oilers and Flames arrived, because somebody had to beat up on the Toronto Maple Leafs. The Montréal bagel shops in Calgary are impressively close to the real thing, and I understand hardcore bagel fans might soon have to venture west for the authentic wood-burning oven variety. Franco-albertain communities dot northern Alberta. Your term, sables bitumeneux (bituminous sands), neatly cuts through the irksome oil sands/tar sands rhetoric squabble.

My personal appreciation for Québec goes beyond drooling at thoughts of squeaky-curd poutine or Schwartz’s smoked meat. My mother grew up in Outremont, much of her anglo family still lives there, and my father worked 50 years in sales for Montréal-based clothing factories. Montréal’s Gibeau julep giant orange is a familiar landmark of my youth; I cherish the five weeks I spent in Quebec City at a Université Laval undergrad French immersion program (but regret I didn’t retain more language); and as I type this, I’m in shirt and pants from La Maison Simons, now with outlets out west.

As a journalist in Calgary, it feels abundantly strange that a practitioner in my long-beleaguered field has lately felt more job security than a petroleum engineer or rig hand. Premier Rachel Notley’s drastic step to mandate a sector-wide oil production cut helped curb a dramatic drop in Alberta oil prices and prevent widespread layoffs. We’ve had busts before, but usually because of global commodity prices; emotions run rawer when we approach an economic cliff because of domestic failings: in this case, the inability to build pipelines, thanks to a flurry of legal/constitutional holdups (Trans Mountain and Keystone XL), political decisions (Northern Gateway), and regulatory/economic issues (Energy East).

If my French was better, I’d have better appreciation for the witty repartee of Tout le monde en parle, but I figure the new Quebec premier’s parries to a recent question on the Energy East pipeline were not TLMEP-grade. The swipes from Quebec’s new premier about “dirty energy” and no “social acceptability” for pipelines were not only clumsy and gratuitous, they also represented the sort of pugnacity Albertans thought we’d fondly waved goodbye to with the electoral defeat of former Montréal mayor Denis Coderre, who advocated loudly against Energy East and called the project’s demise a “major victory.” Then-premier Philippe Couillard was more muted about the pipeline, and we thought François Legault was a supposedly more conservative premier—no Stephen Harper clone, to be sure, but perhaps at least sensitive to the Alberta moment. Nope. It felt like kicking Alberta when we were already down, and in pan-Canadian stereo, after a year of B.C.’s premier and mayors similarly decrying the steel arteries of Alberta’s economic lifeblood. It was wholly unnecessary for Legault to poke Alberta resources when asked about Energy East, which the company TransCanada has no plans to revive. Rookie politicians should know better than to dally with hypothetical questions. Legault also ought to know a provincial premier lacks jurisdiction over interprovincial pipelines—just as B.C.’s premier cannot block Trans Mountain, or, if we’re being honest, as Alberta’s can force it through. There’s no Quebec veto. But it was dismaying to see that the guy with the jurisdiction, Prime Minister Justin Trudeau, appears to bolster Legault’s ill-advised remark by agreeing on CTV that “there is no support for a pipeline through Quebec.” If public opinion actually determined economic and environmental decisions, Mr. Trudeau, B.C.’s Lower Mainland may want a word with you and that Burnaby-bound pipeline expansion you’ve purchased.

But if we’re talking opinion: polls have routinely shown that most British Columbians support the Trans Mountain expansion, and Quebec is the region most strongly opposed to the westbound pipeline. Support likely has roots in direct benefits from a sturdy, opportunity-providing Alberta oil sector. Many B.C. residents and/or their relatives have long sought work in Alberta’s oilfields as mining and forestry work declined, just as east-coast families arrived on the heels of trouble in fisheries and other industries. Much of Ontario’s financial sector understands too, thanks to oil and gas’ super-sized share of the Canadian stock market: banks and deal-makers ride the ups and downs of oil prices and activity levels. Quebec feels these linkages to a lesser extent, though many manufacturers have oil sands supply deals; and when Fort McMurray burned in the 2016 wildfire, hundreds of Quebecers fled their homes and oil sands jobs, just as Saskatchewan ex-pats and Newfoundlanders did.

As Alec Castonguay of L’Actualité wrote in an earlier letter (received, thanks!), much of Quebec’s oil already comes from Alberta—via rail and the Enbridge Line 9 reversal—and less from overseas. And that’s the way Quebecers prefer it, a recent poll shows. Those in Quebec who told Via Rail to  “Buy Canadian!” as it considered a major contract with Siemens over Bombardier (Siemens won) might get that Albertans want the same thing. However, pipeline hearings and radio call-in shows afford you much greater opportunity to decry future capacity expansions for Canada’s oil, and there’s no real chance to thwart additional oil tankers from Algeria or U.S. supply trains.

Climate change fears, I recognize, drive much of the bad sentiment around pipelines and oil sands. Maybe not enough Albertans share concerns about a warming planet, but our current government and corporate leaders pay attention. The province is phasing out coal power plants and ramping up renewables, and has enacted a carbon tax and pledged to cap oil sands. Imperial Oil’s newly announced bitumen project would cut emissions and water use by 25 per cent. Green transitions take time and aren’t easy, just as the aerospace sector isn’t switching in a blink to plug-in planes instead of fuel-burners—and note how long it took Quebec to wean itself off asbestos mining. “Dirty energy” smears tends to make Albertans feel that no matter their efforts and advancements, old images of oil-soaked ducks and belching smoke stacks are all that anyone sees. Additionally, it can be difficult to focus on a cleaner, brighter future when the province’s present seems so bleak. (Fair warning: next spring’s election will likely bring leadership that pares back Alberta’s climate plan, giving you more to worry about.)

Bleakness, of course, can be relative; even after the recent recession, Albertans remain the wealthiest people in Canada. Because of that industry-driven prosperity, it’s a “have” province, while Quebec’s below-average capacity has made it an equalization-receiving “have-not.” The fresh grumbling must come across as Alberta grousing that your residents are less prosperous than ours, and Quebec should shaddup to keep getting this wealth transfer. Well… fair point. You’re a too-convenient target, getting less per capita than other have-not provinces but more overall because you’re twice as populous as the other provinces combined. There’s too much overheated rhetoric about Alberta deficits and Quebec daycare provisions (which have nothing to do with equalization’s formula) and not enough reasoned discussion about the program’s flaws and distortions, such as how, according to economist Trevor Tombe, each $1 in Quebec natural resource revenue would mean $0.67 less in equalization, creating a disincentive to produce.

At the same time as British Columbia pursues Canada’s most comprehensive climate change plan, it’s proceeding with a $40-billion liquefied natural gas project—not dissimilar to a Saguenay LNG terminal venture in the works, though the western project will take plenty of B.C. natural gas and Quebec’s project will import gas from the west. The province, meanwhile, sits on its own resource bonanza. According to a 2013 study, Quebec’s shale gas sector could produce between 6,000 and 15,000 direct jobs (plus spin-off employment)—enough to replace, several times over, 2,500 jobs cut recently by Bombardier. Quebec could, as B.C. intends to, leverage hydro power to make extraction cleaner, and edge closer to weaning itself off equalization (which Legault professes to want), which the three western gas-producing provinces don’t get or require.

Both our provinces excel at having long and often bitter memories—for separate reasons we have harsh recollections of Pierre Trudeau, and those who spit at the thought of Maclean’s after our 2010 Bonhomme cover likely haven’t read down this far. The momentary bitterness toward Quebec and its leader need not endure, just as Alberta hopes its economic logjam doesn’t. You can play a role in accomplishing both those goals: let’s agree that booing Quebec has no social acceptability, just as poorly timed broadsides don’t, either.