A million people at the Pride parade? Really?

There's a good reason the figure is unbelievable: it's wrong

A reader sent Macleans.ca an email yesterday that called into question a figure we used in Monday’s round-up of ‘Need to Know’ news items. We had claimed Sunday’s Pride parade in Toronto drew an estimated one million attendees. As aggregated news items tend to do, our report used facts and figures from another news outlet. The estimate, wherever it emerged (likely a CP report also highlighting Mayor Rob Ford’s absence), was widely reported by major news outlets.

One million, eh? Really? That’s about one-fifth of the population of the Greater Toronto Area crammed into a 2-km parade route through downtown city streets. The letter writer, Steven Murray of Victoria, BC, whose math is undoubtedly better than mine, points out that this is “physically and mathematically impossible.” “To fit one million people into that space,” he wrote, “would require 25 people for each square metre—4 to 5 times as many as would physically fit.”

The total surface area of all the streets within the Pride festival grounds, which are bordered by Bloor and Gerrard streets, Yonge and Jarvis streets, is approximately 157,100 square metres. Aaron Gradeen, a Master’s engineering student at Ryerson University, quickly ran the numbers for me and concluded that even if people were standing shoulder to shoulder in every side street and alley, it would be highly unlikely. “If you can fit seven people per square metre, it’s possible. That just seems like a tight squeeze.” The parade route itself would be only about 40,000 square metres. Gradeen says that, assuming the parade route was 20 metres in width and two kilometres in length, you could fit roughly 280,000 people at the parade at any one time. That’s if there’s seven people standing in each square metre of that area. As an experiment, I taped off one square metre in the newsroom and asked my fellow Maclean’s staffers to stand inside it. At five people, it got awkward. At six, it was feeling quite intimate. At seven, we were clinging to each other to not fall over the taped lines.

Putting the math aside for a moment, here’s a shortcut to understanding that impossible attendance figure. It most likely emerged as an estimate based on a figure in the Economic Impact Report for Toronto Pride in 2009. 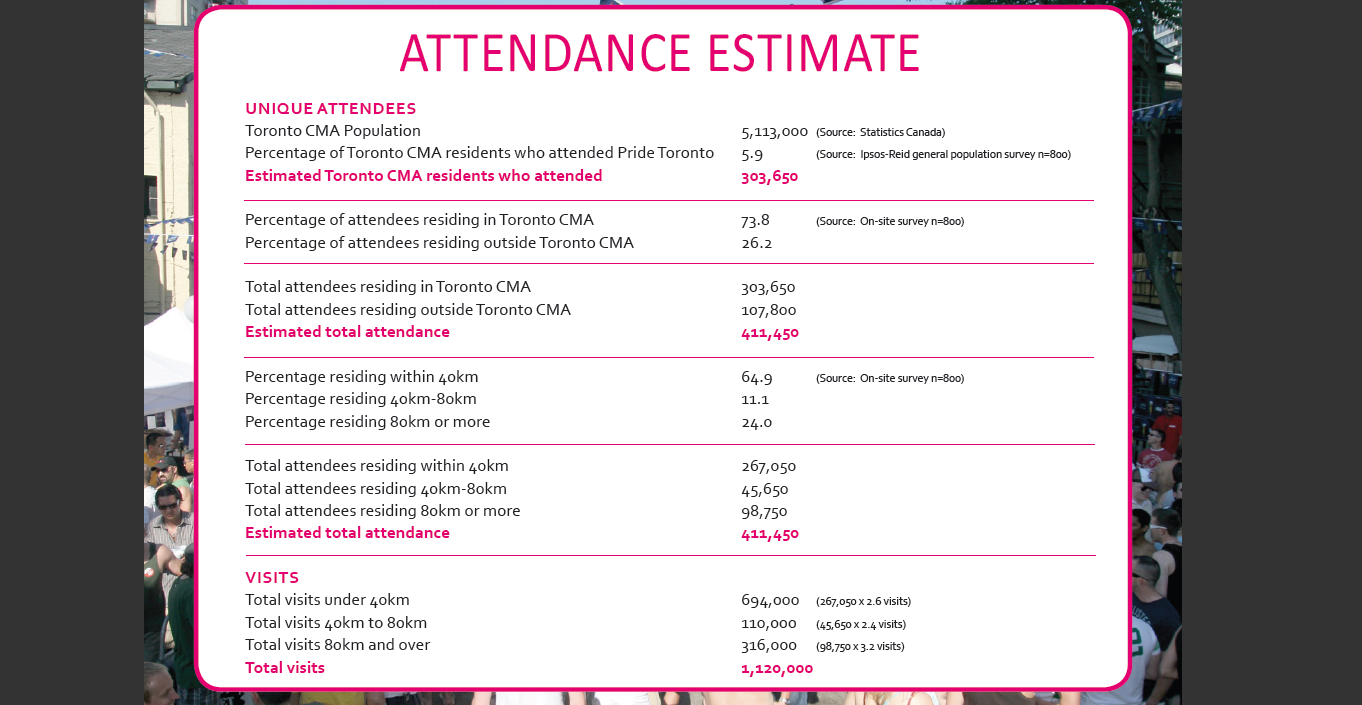 “Attendance is a tricky word,” says Michael Harker, senior partner at Toronto-based Enigma Research Corporation, the event research company behind the report. “There’s a big difference between visits and unique attendees.” The document, which estimates attendance and economic impact, was submitted to and approved by Industry Canada. And it does have a one million figure in it. The 2009 Pride Toronto festival, which lasted from June 25-28, drew an estimated 1,120,000 visits.

“Visits is, a guy comes three times, we count him three times. Uniques is, he comes three times, we count him once.” That one-million figure, then, accounts for total visits to the festival—multiple returns over the span of four days—and not for boots on the ground at the festival’s flagship parade. The total number of uniques was actually 411,450, which, again, does not represent just parade attendees but all visitors over the course of the entire four-day event.

So that changes things.

“Event promoters in general like to talk about the biggest number they can, as you can imagine. They might say it in an interview and then somebody, instead of calling it visits, calls it attendance, and the next person misinterprets it after that. I think that this is at the root of a lot of misunderstanding of the numbers. Yeah, a million people down Yonge St.—that’s not going to fit.”

Const. Victor Kwong, media relations officer at the Toronto Police Service, explains that the police don’t give estimates anymore. “We used to do estimates, but we got a lot of complaints. People would say, ‘oh you’re lowballing so that the event gets less press’ or, ‘you’re highballing so the event gets more support.’ So we just stopped giving out estimates a while ago.”

“But Pride doesn’t make up numbers,” says Harker. “The difference between those two numbers is on their website for anyone to see.”

When I asked communications director at Pride Toronto whether that one million figure sounded a bit inflated, he said he didn’t know. “We don’t have any official numbers yet. But that’s what the media outlets are estimating,” he offered. He then referred me to the Enigma report from 2009. Glen Brown, interim executive director of Pride, responded by email: “We usually try to avoid attendance estimates, since we don’t have any reliable methodology. We do know that almost 6,000 people marched in the Parade—a record number. Many other media outlets are estimating the crowd at a million.”

I edited and posted that erroneous estimate on Monday without giving a moment’s thought to how inflated that number sounded. Thanks to Mr. Murray for pointing out the blatantly obvious.