A new message to Trudeau: There must be no 'acceding to the demands of hostage-takers'

While the Meng case reveals a major fault line among Canadian thinkers, a second group has written to Trudeau urging the PM to defend the rule of law 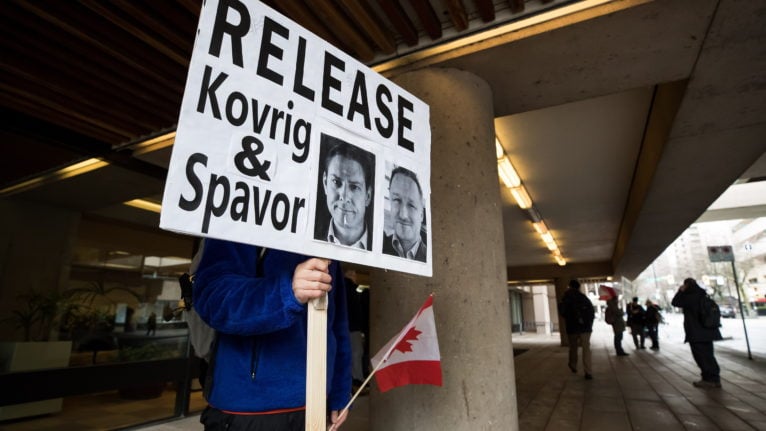 A man holds a sign bearing photographs of Kovrig and Spavor outside B.C. Supreme Court where Meng was attending a hearing in Vancouver on Jan. 21, 2020 (CP/Darryl Dyck)

With Michael Kovrig and Michael Spavor now facing espionage charges after a year and a half of imprisonment in China, a prominent group of Canadian former officials and diplomats emerged this week with a strong recommendation that Prime Minister Justin Trudeau facilitate a sort of prisoner exchange that could bring them home.

They, along with Kovrig’s wife, urged in a letter to Trudeau on Wednesday that Justice Minister David Lametti has the legal authority to intervene at any time and end the extradition process for Meng Wanzhou, the Huawei Chief Financial Officer whose arrest in late 2018 prompted the detention of the two Canadians and whose release China has demanded ever since.

Yet some in Canada’s international affairs community reacted with horror at the suggestion, despite the plight of the detainees, that experts including three former foreign ministers would recommend that Canada turn back on its commitment to judicial independence in the case.

Trudeau asserted Thursday morning that sending a message China can get what it wants through the arbitrary arrest of Canadian citizens would be “absolutely unacceptable,” and could put other travelling Canadians at risk. (The Alliance Canada Hong Kong, a group that advocates stronger pushback against China’s myriad human rights infringements, noted in a Thursday statement that 123 Canadians are currently detained in China, 13 of them since Meng’s arrest.)

A second group of Canadians, mobilized by the Macdonald-Laurier Institute think tank, has penned an open letter to Trudeau that affirms he should stay the course—lest Canada abandon the rule of law as a guiding principle in foreign affairs and accede to “the demands of hostage-takers.” Its 24 initial signatories include author Jonathan Manthorpe, former Conservative immigration minister Chris Alexander and a cross-section of Canadian academia.

Since these arrests, some have argued that Ottawa should simply release Meng in exchange for the release of Kovrig and Spavor, most recently in interviews with and letters signed by a number of high-profile Canadians. These arguments are not only wrong in principle but would involve Canada betraying important values and letting down a number of our key allies.

This would be no “prisoner exchange.” That assumes a false equivalence between Canada’s legitimate arrest of Meng in accordance with our legal obligations and China’s kidnapping of Kovrig and Spavor—an equivalence as spurious as it is heart-breaking. Such an exchange would be nothing less than the abandonment of the rule of law and acceding to the demands of hostage-takers.

On the matter of the rule of law and extradition it is vital to recall that Canada has a reciprocal relationship with the U.S. and other trusted countries where we undertake to turn over people with a case to answer before the other countries’ courts. Under our tradition of the rule of law, however, we don’t simply hand people over. There must be strong evidence that a relevant law has been broken, that the person we have detained has a case to answer and that they will be treated fairly if we release them into the other country’s custody. It is this judicial process that Meng is now undergoing.

A Canadian judge has ruled that Meng’s alleged offences would be crimes if committed in Canada.

Moreover our view is the alleged crimes involved are not minor, but enabled a scheme that saw hundreds of millions of dollars flow illegally to Iran in defiance of international sanctions. China aims, through its hostage diplomacy, to weaken the international community’s ability to enforce such rules.

Historically we have only declined to extradite in very narrow and exceptional cases. What is being asked of us in Meng’s case is that we abandon this honourable tradition, not because of some flaw in the extradition case brought by the Americans, but because China is holding our citizens hostage. The integrity of the rule of law and our judicial system requires that we decline to do so.

As for the hostage-taking itself, as you have already acknowledged, there is good reason why political leaders across many countries, including Canada, consistently refuse to negotiate with hostage-takers. Once you give in to their demands, you prove that such hostage-taking works. That creates incentives for them to try again.

A prisoner exchange would confirm for China’s Communist rulers the value of kidnapping Canadian citizens. Once we capitulate, China—and other authoritarian regimes—would reasonably expect us to do so again. If Canada were to ban Huawei from our 5G networks, to pick just one example, what would stop China from simply taking more Canadians hostage to get us to change our minds?

Nor is this just about Canada. China has detained citizens from countries like Australia, Japan, Great Britain and the U.S. for political ends. If Canada capitulates to Chinese hostage-taking, we would be abandoning solidarity with our allies and making ourselves a weak link when it comes to dealing with Chinese aggression.

Ottawa would almost certainly find itself isolated from many of our key allies and partners—and not just the Trump administration. Whatever one thinks of the current U.S. president, to engage in a “prisoner exchange” now would break faith with those U.S. officials who have spoken up repeatedly and in public both thanking Canada for honouring the rule of law and our extradition treaty on the one hand and condemning China’s hostage-taking on the other. Releasing Meng now would justifiably cause leaders in both the administration and in Congress to see us as a weak and untrustworthy ally at a time when we need all the goodwill we can muster in Washington. The damage to Canada-U.S. relations would be incalculable and would persist irrespective of the outcome of the presidential election in November.

All Canadians, including the signatories of this letter, want fervently for Kovrig and Spavor to be released from their outrageous predicament. As painful as it may be, however, we must protect Canadians from hostage diplomacy, uphold the rule of law and maintain Canada’s sovereign decision-making capacity. A “prisoner exchange” is the antithesis of these vital aims.

Holding firm against China’s scandalous treatment of Kovrig and Spavor does not exhaust our options. Ottawa is rightly working with our allies to denounce China’s illegal hostage diplomacy and to improve the deplorable conditions in which Kovrig and Spavor are being held. Yet more can still be done. For instance, Ottawa should issue a warning to Canadians that it cannot guarantee their safety when travelling in China. Canada should also apply Magnitsky sanctions against Chinese officials responsible for the detention of Kovrig and Spavor.

We were heartened by your statement before the media on 22 June when asked if your government was considering a prisoner exchange. You replied then, “No. We’re not considering that … [A]nyone who’s considering weakening our values or weakening the independence of our justice system doesn’t understand the importance of standing strong on our principles and our values.” Such leadership is just what Canada needs at this time.

While appeasement might return Michael Kovrig and Michael Spavor to Canada, the cost of such appeasement would be the safety and security of Canadians all over the world, the independence of our judiciary, and the integrity of our sovereign decision-making capacity. We therefore urge you to remain resolute in defence of the rule of law, our traditional values and our relations with friends and allies by not giving in to China’s improper and odious strategy of hostage diplomacy.