In this Maclean's exclusive, Paul Mason recalls his shoot with a man he knew as 'Rocco' 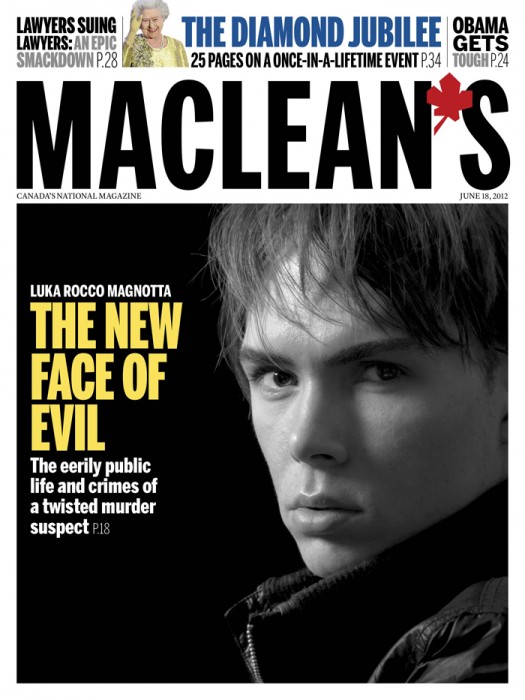 Paul Mason knew the man simply as Rocco. Seeking to beef up his photographic portfolio, the 48-year-old Montrealer had placed an ad on Craigslist in April 2011, seeking models who would work gratis in exchange for free portraits. Soon, Rocco got in touch. Mason agreed to meet the man, who he understood to be a gay model, at Rocco’s apartment in the gentrifying southwest Montreal neighbourhood of Pointe-Saint-Charles. And so it was that around lunchtime on Saturday, May 1 of last year, Mason arrived at Rocco’s apartment, near the Charlevoix metro. Rocco “came out dressed in sweatpants, a tank-top hoodie, and a little bit of facial makeup on his cheeks,” recalls Mason. “The cheek thing was a little much. I said to myself, ‘Ugh, that’s going to be a little creamy on camera—but what the hell.’ I looked at the guy: a very chiselled face, not ugly, by any means. Quite dynamic looking.”

The foundation on his cheeks wasn’t his only idiosyncrasy. “He was speaking in this Russian, sort-of-little-bit-of-an-Eastern-European accent,” Mason says, imitating the Slavic cadence. “He maintained it all the way through. I had no reason to suspect it wasn’t real, but it did cross my mind: is this a real accent? It was just a little bit odd. I said, ‘Where are you from?’ and he says, ‘Half-Italian, half-Russian.’ I had no reason to suspect he was putting on a persona.” Over the ensuing hours Mason took dozens of outdoor shots of Rocco against an urban backdrop of brickwork and graffiti. “I said, ‘Okay, we’re going to do the first shot,’ and he said, ‘I’m ready,’ and I pointed the camera and he went boom: his face went 45 degrees to the side—like a robot, almost—and he froze: no smile, no nothing. Stone-faced. And I said in my head, ‘This guy’s intense. These pictures are going to turn out nice. As freaky as he looks, they’re going to have some punch.’ ”

Rocco mentioned modelling work he’d done in Europe and New York and the fact he had a child. His speaking voice was dry and monotone. When Mason felt he’d run out of things to shoot in the area, Rocco helped him carry his lighting equipment up the stairs to his apartment for an indoor shoot. “It was a mess,” Mason remembers of the place. “Sloppy. One room, a kitchenette, a bed, unmade, with a red bedspread.” A green couch in the room looked more promising. “I said, ‘This could be like a nice studio boudoir-type shot.’ ” They closed the shutters and set up his flash heads. “He said, ‘Do you want me on the bed?’ I said, ‘Yeah, sure, let’s start on the bed and we’ll do some after on the sofa.’ He got on the bed and did very laid-back, semi-sensual poses. Nothing erotic—there was no nudity or anything like that—and I shot away. And he maintained this cold face with no smile. There’s only one picture in the whole 90 pictures I took with an inkling of a grin on his face.

“Then he put on the black fake leather jacket and he looked very James Dean,” Mason says. “I even thought that before I knew he had a fetish for him.” Mason was happy with the day’s work, and spent weeks poring over the shots on his computer, whittling them down. He arranged to meet Rocco again to hand over some portraits; Rocco greeted him with that same Eastern European accent, and the two men shook hands. It was the last time Mason would see him until last Thursday. That day, at work, a colleague made a black joke about finding body parts in the trash. Mason had not yet heard of the grisly crimes that for the past week have captivated the world. “Ten minutes later my wife phones me. ‘Paul,’ she says: ‘It’s him! The guy you photographed last year. It’s him, I’m sure of it.’ ”

The New Face of Evil: This Maclean’s report by Nicholas Kohler and Martin Patriquin continues in the current issue of Maclean’s, which is now on newsstands.