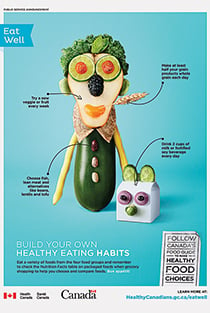 Last year the federal government paid Harris-Decima, the market research firm, $75,000 to test some ideas for an advertising campaign to promote healthy eating. The firm surveyed 1,800 parents with children 12 and under, and conducted focus groups in Toronto, Calgary and Montreal. They showed participants a variety of creative concepts. Some of the material simply urged consumers to eat healthier. But others were more pointed, including messages about how Canadians consume too much sodium, and that most of that salt hides in packaged foods. Those warnings clicked. “Specifically,” Harris-Decima said, “messages that focused on sodium rather than general healthy eating appeared to make a stronger connection with participants than more generic messages.”

Armed with this research, Health Minister Leona Aglukkaq unveiled the “Eat Well” campaign in early March. In partnership with the Retail Council of Canada and the Canadian Federation of Independent Grocers, Aglukkaq’s department rolled out print ads, fact sheets for distribution in stores, online content and more. Yet little of the sodium material Harris-Decima found so effective survived. For instance, the firm tested a sort of fact box, meant to be displayed prominently like a label at the bottom of a print ad, which read: “Without knowing it, over 75 per cent of your sodium comes from packaged food.” An impressive one-third of the test audience ranked it, on a scale of one to 10, eight or higher. But it’s not being used. An alternative text box, which reads “Follow Canada’s food guide to make healthy choices,” made it into the campaign, despite only a tepid one-fifth of Harris-Decima’s participants scoring it eight or higher.

This isn’t the way they do it on Mad Men. Rejecting the ad ideas that seemed to work best, however, does fit with the Conservative track record on salt. Three years ago Aglukkaq disbanded the sodium working group, an expert panel that was pushing the government toward naming and shaming food companies that don’t do enough to reduce sodium in processed food. It’s a serious issue. According to Health Canada, Canadians typically eat about 3,400 mg of sodium a day, more than double what’s needed. All that salt hikes the risk of high blood pressure, and thus of strokes and heart disease.

But the Tories opted to put their emphasis on cheerfully coaxing consumers into planning meals carefully—not targeting the fact that so much salt is going into so many products. “The message on prepackaged food,” said Steve Outhouse, Aglukkaq’s communications director, “was determined to be focusing in too much on one specific area.” Outhouse added that rejecting sharp-edged messaging on sodium was the government’s call, not a decision dictated by the participating retailers or grocers.

He defended the approach as respectful of consumer choice. Nutrition labels give shoppers enough data to choose sensibly, he said, adding: “Government won’t decide that for you.” But some experts scoff at the campaign, which has a three-year budget of $10 million, for failing to be more blunt about sodium, especially high levels in processed food. “To bury this kind of information in these bland, anodyne, ‘Be a good Canadian and follow the food rules,’ messages, it’s delinquency,” said Dr. Andrew Pipe, chief of the University of Ottawa Heart Institute’s prevention and rehabilitation division. “It’s callously indifferent to what we all would understand to be public health priorities.”