A refugee flood? Pull yourself together, Canada

We can't stop refugees from crossing the border. We can show courage by helping them and heading off a U.S.-style nativist backlash.

Wise words, and not just for an errant Catholic like me. Right now, the entire country, from sea to shining sea, should be repeating the Serenity Prayer as a mantra. We’re suddenly living in a strange new world, with Donald Trump as President, and refugees flowing across the U.S. border into Canada. And understanding what we can and cannot control is an important first step towards maintaining our collective sanity.

It’s already too late for some, sadly. I’m thinking of poor old Thomas Mulcair, for instance. He’s begun to stomp around the House of Commons, going red in the face, yelling for someone to poke Trump in the chest. This is obviously a man who has lost touch with reality. At this point, the only thing that will stop the dubiously-elected President from eventually imposing his travel ban would be a meteor. No amount of “tough talk” from Canada’s Prime Ministerial spokes-model is going to change that.

There are a few Tories, too, with a shaky white-knuckled grip on reality, hysterically calling for the government to stop the sudden flow of refugees across the border into Canada. Of course, their co-dependent Liberal dance partners are abetting that notion by nodding gravely and pretending they will be doing “something” about it (before they add the ritual passive-aggressive jab about cutting refugee benefits).

Everyone needs to take a deep breath and accept there is nothing we can do to stop any asylum seekers from walking into Canada, Samsonite in hand. We aren’t building a wall, or even a fence. Our armed forces don’t even have enough drones to take a group selfie on the parade ground, let alone patrol over 8,000 kilometres of frontier. Hell, even if every single Canadian stood on the border and locked arms, from White Rock to Saint Andrews, and yelled “Red Rover! Red Rover! We call Kamal over!”, they’d still run right through us.

We have to accept that this is simply something we cannot change. We can’t stop Trump from scaring the bejeezus out of people, and we can’t stop many of those people from coming north. 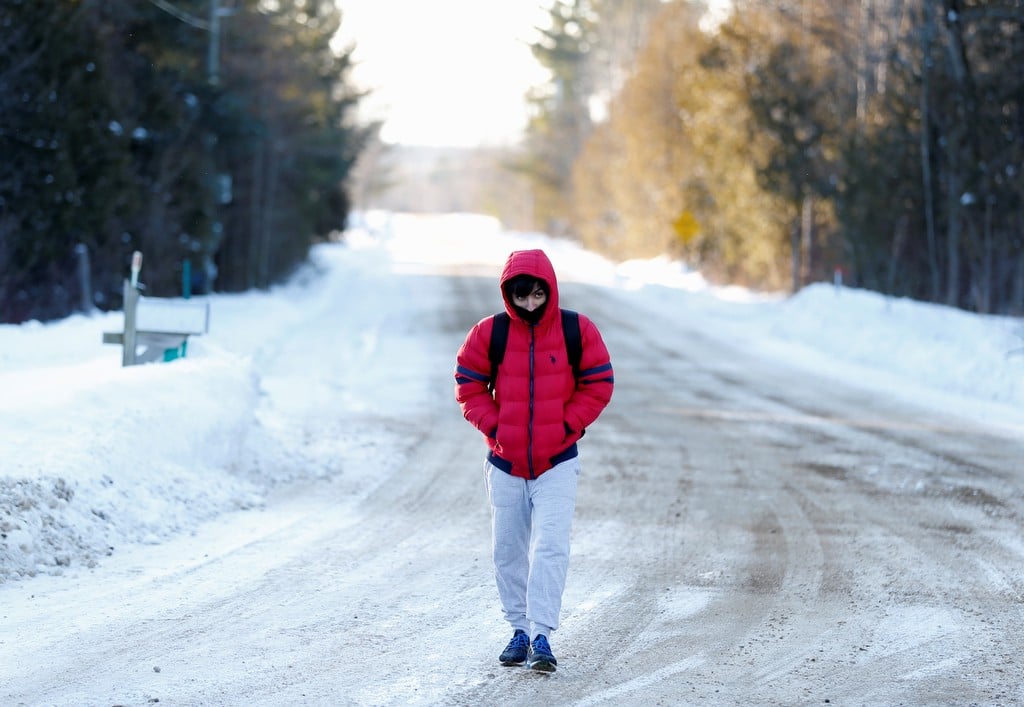 A man who said his name was Abdullah and that he was a student from Yemen walks towards the U.S.-Canada border to cross into Hemmingford, Canada, from Champlain in New York, U.S., February 17, 2017. (Christinne Muschi/Reuters)

But, there are things that can be changed. For one, the government can get ready for what’s coming. Our chronically calcified Ministry of Citizenship and Immigration can put more people on the case, and accelerate refugee screening and processing. Provincial and local governments can also step up, like they did during the last influx of Syrians, to establish community networks to support and integrate those asylum seekers who do arrive.

But, it’s us, the Canadian public, that really need the courage to change. According to a new Angus Reid poll, 25 per cent of us want to impose a Trump-style travel ban, and over 40 per cent say we are accepting too many refugees. Let’s be clear–this is bollocks. As of last month, Canada has accepted 40,081 Syrian refugees. That’s one refugee for every 857 Canadians. Imagine you’re at a huge wedding and on your third trip to the open bar. A Syrian kid comes in a side door and sits down. Are you suddenly feeling too crowded? Worried there may not be enough booze? Frightened? If you answered yes to any of these things, you’re simply a fool. 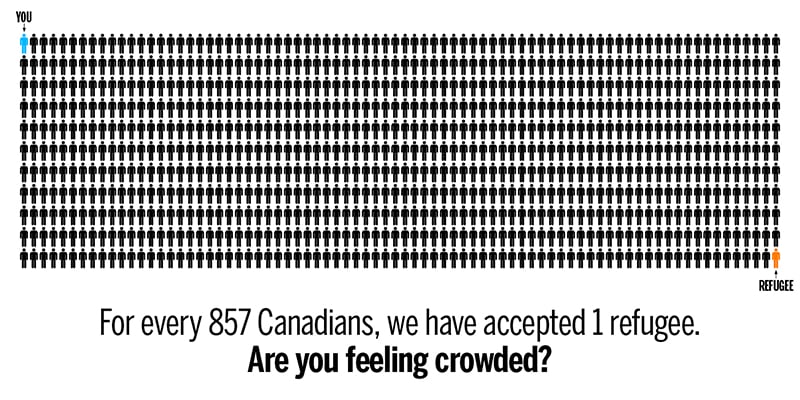 The good news is that the rest of us can help change those attitudes. We can sponsor or “adopt” asylum seekers, helping them to settle into our communities and reducing tensions with those who are less welcoming. We can find ways to help the small towns along the border who are suddenly rattled by the site of refugee families walking over the stubble. We can publicize that crime rates among refugees are lower than among native-born Canadians. And we can ignore the bigoted leeches on the fringes of our political system, people cynically turning reasonable concerns into wide-eyed panic to whip up a few website subscriptions or sell some party memberships.

We can’t stop Trump and we can’t stop the refugees he may be sending our way. But we can ensure that surge in asylum seekers isn’t disruptive and doesn’t spark an ugly nativist backlash like we’ve seen in the United States and parts of Europe. It just requires a little courage, and a little wisdom. Surely we’re up to the task?