A Remembrance Day garden of flags for the fallen

In front of Toronto's Manulife building is a stunning array of 11,843 flags—each representing fallen Canadians 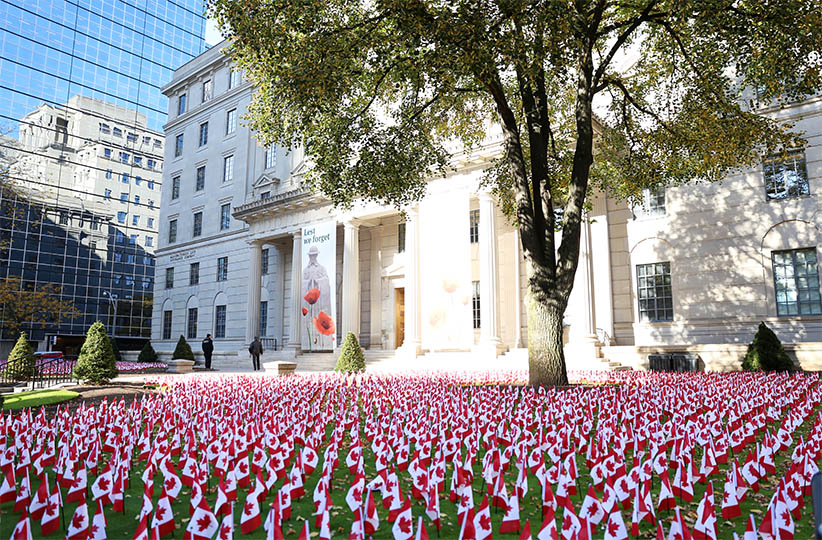 Starting on Nov. 4, a scene repeated itself over and over on bustling Bloor Street in downtown Toronto. When pedestrians approached Manulife Financial Corp.’s imposing headquarters, their voices quieted, their pace slowed. Many stopped, reached for their phones and started taking pictures. Behind the cast-iron fences, the company’s immaculately clipped lawn is covered with small Canadian flags. Lined up row on row, scores of Canada’s red maple leaves gently blow in the wind. There are exactly 11,843. Each flag represents 10 Canadian troops who have fallen in war or on peacekeeping missions.

The inspiration for the flag garden originally came from Lisa Thomson, the wife of the firm’s chief investment officer, Warren Thomson, who brought it to work, noting that the company’s American arm, John Hancock, had been doing something similar for Memorial Day in Boston for several years. “It’s a gesture of thanks and remembrance,” says spokesperson Brooke Tucker-Reid, “and a way to bring attention to veterans and the fallen.”

Exactly one week before Nov. 11, after workers carefully laid out the grid on the lawn, nearly 100 Manulife employees got to work planting the flags. There were so many volunteers that the task, expected to take until after dark, was finished in a few hours.

Large Remembrance banners hang from the building’s neoclassical facade, while small explanatory notes are tied to the fence. There has been such interest that the main gates, normally closed on weekends, were kept open to allow people to get a better look. On Monday, workers returned to the lawn, straightening flags that had broken formation during a blustery weekend. 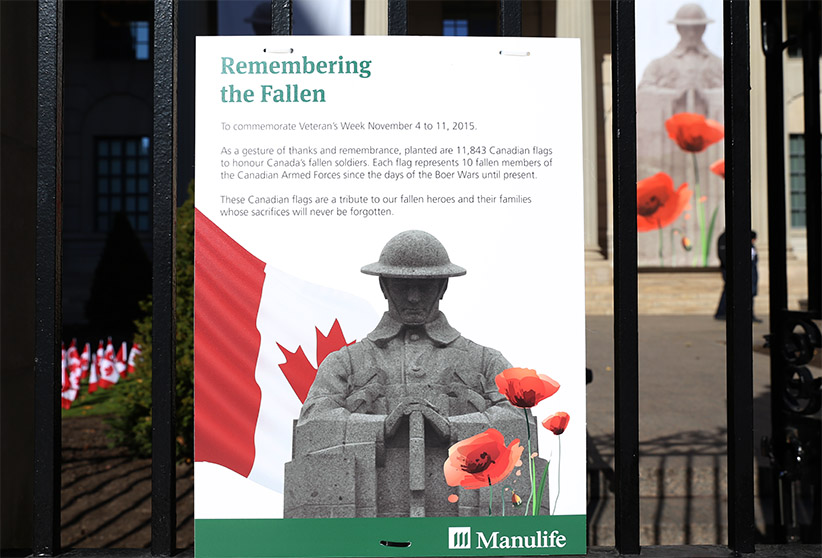 11,843 flags planted in honour of fallen Canadian soliders at the Manulife building (Photograph by Kayla Chobotiuk)

Manulife’s flag garden isn’t unique. Since 1928, Britain has created Fields of Remembrance for its war dead. This year, in addition to the main field at Westminster Abbey in London, another five fields were “planted” around Britain with more than 120,000 tributes, many carrying personal notes to the dead. Yet Toronto’s flag garden is set apart by both its locale and creators—the headquarters of a private company.

Inaugurated by Ontario Lieutenant Governor Elizabeth Dowdeswell, the display will be in place for a week. At the end of Remembrance Day, Manulife will remove the flags. Tucker-Reid says they will be back next November.

Update: On Nov. 10, Manulife clarified that the idea originated with Lisa Thomson. Her husband, Warren, then who brought it to the firm. The wording has been edited to reflect that clarification.