A second chance for Ottawa to make things right with Alberta

Dealing with disaster is a tricky political game 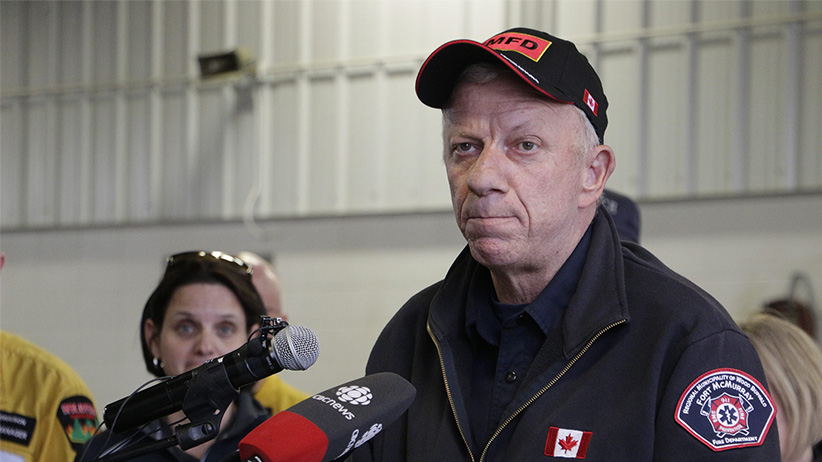 Fort McMurray, Alberta, fire chief Darby Allen speaks to members of the media at a fire station in Fort McMurray, Monday, May 9, 2016. A break in the weather has officials optimistic they have reached a turning point on getting a handle on the massive wildfire. Rachel La Corte/AP

There’s no place for politics at the height of an emergency. No place for debates about ideology when the Beast is raging and people are fleeing for their lives. The Beast—as locals call the fire that slashed through Fort McMurray and still rages— doesn’t distinguish between left and right, rich or poor. The Beast consumes everything, words and politics. For now. Soon, however, when the long rebuilding process begins, it will do the very opposite. The Beast of Fort McMurray will define politics in the West for a generation. It’s up to Justin Trudeau to decide in what way.

For the moment, Trudeau has smartly stayed in the background. For a Prime Minister who is developing a reputation for showing up at the opening of an envelope, Trudeau has displayed restraint, compassion and an adroit ability to avoid making the disaster about him. No comments about the impact of climate change. That debate will come, but not right now. No immediate visit to the Edmonton evacuation centre, where Trudeau might have recreated the now-famous scene when he met the Syrian refugees at the Toronto airport. Would that have looked empathetic or gallingly self-promoting? The line is too fine to walk, as every leader knows.

Instead, Trudeau waited almost two weeks to visit the city, in the meantime letting the fire illuminate the resilience, generosity and optimism of the people of Fort McMurray, of Alberta and of Canada. Is there a more tireless and competent man than fire chief Darby Allen, who led the emergency team that saved 85 per cent of Fort McMurray? What about the recently laid-off oil workers, driving their pickup trucks up and down Highway 63 delivering fuel, groceries and medicine to evacuating families? They deserve the spotlight, as do Canadians who donated record-breaking amounts to the Red Cross.

While Premier Rachel Notley has shown immense leadership skills—sure-handed and confident-—we must also mention Wildrose Leader Brian Jean, who recently lost his 24-year-old son to a brain hemhorrage related to lymphoma. His house and all the memories it held burned down. Since then he’s been living a tent, helping his neighbours, not wanting to take up space at an evacuation centre. A former MP, Jean is a tough political partisan, but if you ever needed a reason to ditch your cynicism about the kind of people who embody the spirit of public service, Jean is it. I spoke to him as he choked back tears, not over his own loss—he faced that with stoicism—but over the countless acts of generosity he’d witnessed. The destruction may have laid bare a city, but it revealed a people at their very best.

Still, Trudeau is keenly aware how quickly goodwill can turn to a political ash. George W. Bush’s inept response to hurricane Katrina damaged his political credibility and handed the next election to the Democrats. “Brownie, you’re doing a heck of a job,” Bush blurted out in his frat-boy style, congratulating his crony Michael Brown on his leadership of FEMA, the agency tasked with handling the crisis. A week later “Brownie” was fired. Americans, especially African-Americans, never forgot Bush’s indifference.

The ﬁre in Fort McMurray is a similar pivotal moment. Federal support for the city will be a proxy for how Ottawa supports Alberta and the oil sands in general. Trudeau has offered to match Red Cross donations and sent in military support, but that’s just a start. After promising billions of dollars to fight climate change, readying a bailout for Bombardier, and, this week, pledging $785 million for a global fund to fight AIDS, tuberculosis and malaria, Trudeau must come forward with a major package for Fort McMurray.

For some this means nothing less than a pipeline going east or west, a signal that Fort McMurray has a genuine economic future and a recovery plan. Cue the debate over climate change. But if Trudeau dithers, he risks unleashing the seething Western anger that has been pooling in the tailing ponds since his father’s National Energy Program. In fact, since Confederation itself.

“Those discourses—the West versus the rest—will not disappear, they have become part of Western identity, but they do not have to dominate Westerners’ disparate identities,” Mary Janigan told me when I asked her if the fire could be a political turning point for the West. She is the author of the brilliant book Let the Eastern Bastards Freeze in the Dark, which chronicles the history of Western alienation. According to Janigan, Trudeau’s principal secretary, Gerald Butts, loved her book and he told her Trudeau did as well, which may explain how carefully and attentively Trudeau has treated Alberta. “I do think that the nuanced federal response of practical sympathy and prompt help can do much to heal a breach that is almost as old as Confederation,” Janigan says optimistically. “There are no miracles, but attitudes can evolve.”

With an NDP government in Alberta and a Liberal government in Ottawa, the horror of this fire offers an opportunity for either a genuine political realignment to take deep root or for old resentments and fractures to deepen. The real Beast will not end up being the fire itself, but how the federal government handles the rebuilding of Fort McMurray.