A short history of scapegoating Muslims in Quebec

The Coalition Avenir Québec's new ad features a warning and Muslim woman in a chador. It's a familiar gambit in Quebec politics. 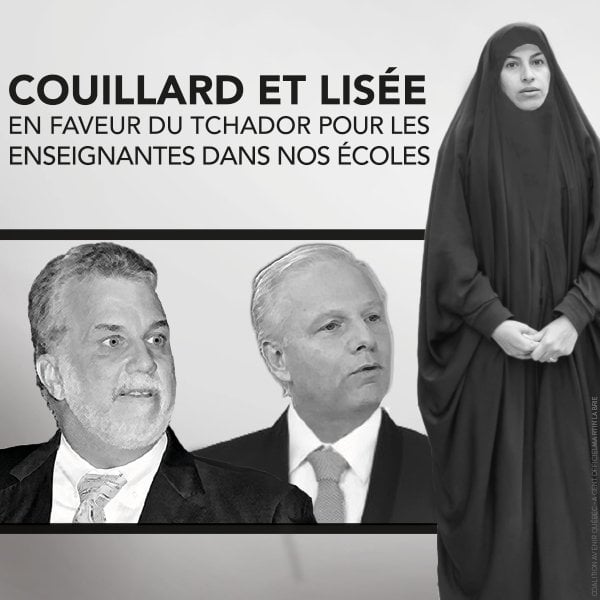 We are midway through Quebec’s election cycle, and predicable things are happening. Opposition parties begin to stake out positions on key issues, the importance of which are no doubt polled, focused grouped and otherwise scientifically developed. The most recent efforts of the Coalition Avenir Québec, the province’s second opposition party, can be seen in the charming advertisement above.

“Couillard and Lisée,” it reads, referring to Liberal Premier Philippe Couillard and Parti Québécois leader Jean-François Lisée, “[are] in favour of the chador for teachers in our schools.”

The ad has a stunned and/or befuddled-looking Couillard and Lisée staring at a woman wearing the Muslim garb. The message, in case it hasn’t yet hit you over the head, is that should you vote for either the Liberals or the PQ, your children will be put under the spell of a cadre of evil-looking Muslim women. Vote CAQ, and teachers will remain uncovered (and probably lily white, for that matter.)

It’s gross stuff, of course. It’s also crafty as hell. Both the PQ and the governing Liberals have said that anyone working for the state must do so with their faces uncovered “for security or identification reasons”, as a proposed Liberal law states. Because the chador wearer’s face remains uncovered, it wouldn’t fall under this stipulation. Ergo, so the intentionally blinkered CAQ reasoning goes, the Liberals (and the PQ, which will likely support the proposed law) must be in favour of the chador.

As gross as it is, the most recent CAQ gambit is hardly the first time a party has attempted to make political hay on the backs of Muslim women and other religious minorities. Who can forget this gem, from 2013? 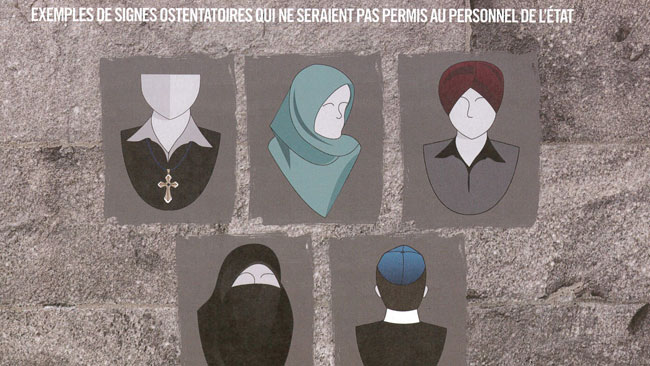 This was the so-called charter of Quebec values, the Parti Québécois’s electoral gambit leading up to the 2014 election. In many ways it is more offensive than the CAQ advertisement. The above image was part of a $2-million ad campaign for a bill introduced by an actual minister that would have been made law had the PQ won the 2014 election. The PQ didn’t win, but it wasn’t for lack of scraping the bottom of the barrel.

During the campaign, the party trotted out Janette Bertrand, a favoured vedette of the very Baby Boomers the PQ wished to recruit, to press flesh and insult minorities. Muslim doctors, she opined, allowed women to “die faster.” Swarthy men had taken over her swimming pool for religious reasons and kicked her out, depriving her of her ability to do aqua-gym exercises. “That’s why we need the charter,” she said. (I’m not making this up.)

Politics, not a sense of shame, caused the PQ to back away from the charter. It has just announced its “resolute, balanced and responsible approach” to Quebec identity that will see the party “build a better dialogue between its parliamentary wing and cultural communities.”

Yet PQ leader Lisée himself has hardly gone all Kumbaya—he’s just changed opinions once again. In 2013, taking great umbrage in something I wrote, Lisée wrote that the PQ’s charter could have flowed from the pen of Thomas Jefferson. Less than a year and one bruising electoral loss later, Lisée said he wouldn’t have supported the charter after all. About two months ago, he said that burqas must be banned “before a jihadist uses one to hide his movements.” Today, he reneged on the comment, saying it was wasn’t his best line. Translation: Lisée was all for scapegoating religious minorities before he was against it—and he may well be for it again, depending on how things go.

I’d be remiss if I didn’t include this pungent example of immigrant-baiting in Quebec. 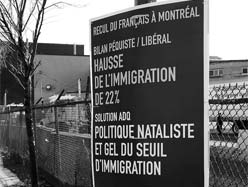 This is an election sign from the 2008 campaign of the ADQ, the precursor to the CAQ. “Decrease of the French language in Montreal,” it reads. “The track record of the PQ and Liberals: a 22 per cent increase in immigration. The ADQ’s solution: a natalist political plan and a freeze of immigration levels.”

By equating the supposed loss of French in Montreal with the increase in immigration, we have a major political party, the province’s official opposition at the time, scapegoating immigrants not for how they may dress but for what tumbles out of their mouths.

At the time, the PQ denounced the campaign, calling it worthy of France’s hard right Front National. Five years later, the PQ itself introduced the charter—supported by none other than Front National leader Marine Le Pen.

Chutzpah is a great word.