The correction may be slated for spring, two years after her murder 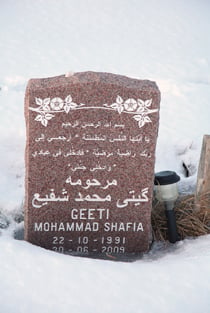 For Ali Altaie, the warm spring weather can’t come soon enough. The co-director of the Hamza Cemetery, an Islamic burial ground in Laval, Que., has been fielding frequent phone calls in the wake of the Shafia “honour killing” trial that saw Mohammad Shafia, his wife, Tooba Yahya, and son Hamed convicted on four counts of first-degree murder. Their victims, Rona Amir Mohammad and sisters Zainab, Sahar and Geeti are buried in a neat row in Altaie’s cemetery. And people keep calling to tell him about a disconcerting mistake on one of their graves that the family doesn’t appear to care enough about to correct.

At 13, Geeti was the youngest of those killed and dumped into the Rideau Canal at Kingston, Ont. But her date of birth, barely visible above the snow on the grounds of the cemetery, is erroneously chiselled on her tombstone as “22-10-1991”—the same date inscribed on the grave of her beloved, 17-year-old big sister Sahar, which sits beside hers. “We’ll fix it,” Altaie tells Maclean’s, clearly frustrated with the attention brought by the mistake.

But any alterations will have to wait. The company that provides tombstones for the cemetery won’t make repairs to them during the winter because the ground is frozen. “They’re supposed to go and fix it as soon as the weather is good,” says Altaie.

It’s not clear why the mistake hasn’t already been corrected—though it is perhaps hardly surprising given that Geeti’s father, the man convicted of her brutal, premeditated murder, once infamously spat, “May the devil s–t on their graves!” while referring to her and her sisters. Altaie says he gave the correct information to the company, which made the error. Now that the issue has risen to prominence, Altaie says a person claiming to be a cousin of the Shafias has also called to ask that Geeti’s birthdate be changed on her tombstone. With that blessing, Altaie says the cemetery will foot the bill for the change, which he expects to cost $200. “It doesn’t matter how much it costs,” says Altaie.

Maclean’s readers feel the same way. After senior writer Michael Friscolanti wrote of the gravestone mix-up in the Feb. 13 issue, many wrote letters expressing shock, distress and confusion over the mistake. “What an incredibly sad thing to think that this was not noticed and corrected right away,” said Sarnia, Ont., resident Carole Mitro. Others, meanwhile, have expressed their desire to help have Geeti’s real birthday inscribed on her tombstone. “She is owed this one small kindness after having been failed in her short life,” wrote Jennifer Tyrrell.

That a little girl’s body could have lain beneath the glaring mistake for over two years is difficult to fathom. Either no one noticed, or worse, no one who cared enough to change it has ever been to visit. Another tragedy, though perhaps it should not be a surprise. As Dinah Taylor of Grand Bend, Ont., wrote: “If respect is not shown to the living, it is not likely to be shown to the dead.”