A troubling inconsistency at the Merrifield RCMP trial

Charlie Gillis on the latest from the civil trial of Sgt. Peter Merrifield 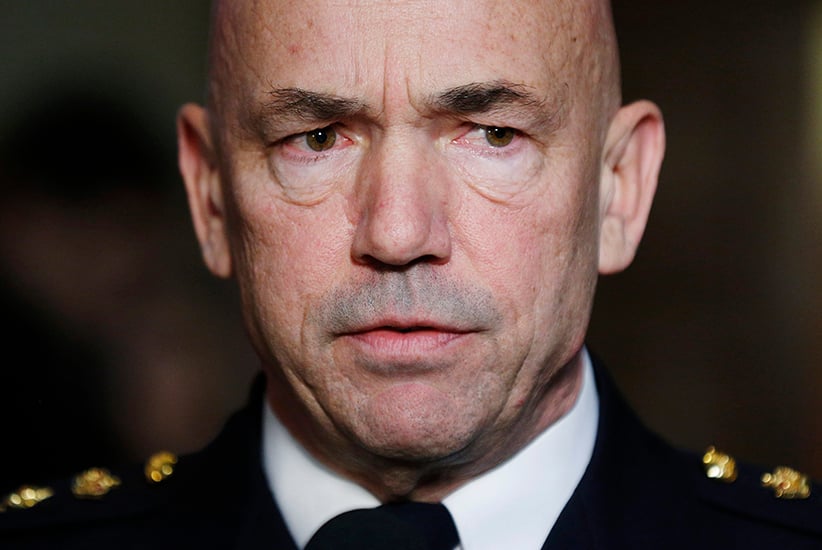 Was RCMP Commissioner Bob Paulson entirely forthright when he testified in court last winter about the matter of a senior officer who was caught up in a john sweep?

Or, for that matter, when he referred to the incident two years ago before a Senate standing committee?

Worth asking, because there’s a troubling discrepancy between the commissioner’s account of what he knew about this case, and that of one of his closest lieutenants, assistant commissioner Stephen White.

The difference came to light on Tuesday when White testified at the civil trial of Sgt. Peter Merrifield, a veteran Mountie alleging workplace harassment, abuse of authority and cover-ups on the part of his senior officers.

One of Merrifield’s contentions is that the RCMP treats misconduct on the part of commissioned officers differently than it does “blue-shirt” Mounties below the rank of staff sergeant. To back this claim, he has referred publicly, and in court, to a 2006 incident, saying one of his commanders, a superintendent, was observed by city police in London, Ont., trying to hire a female undercover officer posing as a prostitute.

On May 27, 2013, Merrifield testified before the Senate standing committee on national security and defence, which, at the time, was looking into harassment in the RCMP. He told the committee he raised the London incident within the RCMP, but that his questions went unanswered. The same day, Merrifield mentioned the issue during an appearance on CBC-TV’s Power & Politics.

The commissioner did not appreciate his candour. The next morning, an upset Paulson dialled up White, the commanding officer of the RCMP’s operations in Ontario, to ask him what was going on. Why was this officer airing his discontent in Parliament, and on TV?

What was said during that conversation is pivotal, because, seven days later, Paulson appeared before the Senate committee and heaped scorn on Merrifield. “He was suggesting that his bosses have all harassed him and are cavorting with prostitutes,” said the commissioner derisively; he then went on to portray Merrifield and other harassment complainants as frustrated malcontents who want to unionize the RCMP, noting suggestively that Merrifield had spent “a considerable time away” from work. “Let’s face it,” he added, “some people’s ambitions exceed their abilities.”

. . . for the love of Pete, we have to be open and fair-minded when we hear about these issues and complaints, lest they get misrepresented, or worse: misunderstood and then adopted as something they are not. I cannot be continually defending against outlandish claims that have not been tested or established, but yet are being put forward as though they are gospel and representative of the modern workplace experience of the RCMP, because they are not.

In short, it’s a fairly efficient trashing of Merrifield’s credibility. You can see why the officer’s lawyers were eager to have Paulson testify at the civil trial in Newmarket, Ont. How could the commissioner be confident that a claim is outlandish if, as he notes, it hasn’t been tested?

So it was high drama last December when, with Paulson on the stand, Merrifield’s lawyer, John Phillips, handed the commissioner a copy of a London police report suggesting that, indeed, a senior RCMP officer had tried to hire their undercover officer during a john sting:

PHILLIPS: In respect of issues surrounding [the officer caught up in the sting], one of those involved—and you referenced it earlier—prostitutes. Do you know if any investigation was conducted in respect to that?

JP: (showing document) This is a narrative street check, London police service, and I’ll ask you just to read it to yourself.

JP: Have you ever seen that document?

JP: Has anyone ever discussed the contents of that document with you?

JP: Did anyone suggest that the allegations that Sgt. Merrifield made with respect to [the officer] may have had some foundation?

Paulson went on to testify that whatever knowledge he had about the john sting was limited to what White told him during that phone conversation on the morning of May 28.

Trouble is, White had a strikingly different memory of the conversation when asked about it on Tuesday. Again, from Phillips’s examination-in-chief:

PHILLIPS: Did you advise Commissioner Paulson at that point about the London city police document?

WHITE: We would have talked about it briefly, yes.

JP: So he was aware of that?

SW: Of the document?

SW: I don’t know if I would have mentioned the document.

JP: Was he aware of the fact that inquiries had been made of London city police?

JP: And was he aware that the statements made by Officer Merrifield had been substantiated in some measure?

SW: I don’t think we got into that level of discussion.

In fact, court has heard, the RCMP did look into the incident—quite possibly, under Paulson’s instruction—back in January 2012, when Merrifield listed it among a series of grievances he had with the RCMP in an email sent to the then-newly appointed commissioner, as well as to White and several other senior officers.

Paulson himself has testified that he instructed White to look into Merrifield’s claims. White said he doesn’t recall that, but he did tell court on Tuesday that he assigned a chief superintendent, Norman Mazzerolle, to find out more about the john sting story.

Mazzerolle, he said, made inquiries with the London police and came back within a couple of days with a copy of what appears to be the self-same report John Phillips showed Paulson back in December.

Which raises another problem for the Mounties: If the RCMP have had their copy of the report since 2012, why was Paulson allowed to go before the Senate committee and disparage Merrifield? Moreover, why did neither they, nor the Department of Justice lawyers representing them at the Merrifield trial, disclose it over the past three years of pretrial interactions with Merrifield’s lawyers?

Phillips had some choice words about that during Tuesday’s proceedings. “It escapes me as to why, when asked the questions in examination for discovery about these issues, these documents aren’t produced,” he snapped. “Previous harassment complaints; issues relating to how these were investigated—this is a producible document. It should have been produced.”

Merrifield, in case you’re wondering, says he got his copy in an unmarked inter-office envelope—evidently from some anonymous well-wisher within the RCMP and/or the London police.

Maybe we’ll learn more about this. A Maclean’s request to RCMP spokespeople for comment has so far gone unacknowledged. But Justice Mary Vallee, who is overseeing the trial in Newmarket, has asked White to locate the RCMP’s copy of the report and to provide it to the court.

It also seems possible that either White or Paulson, or possibly both, could be recalled to clear up this matter. It goes, after all, to the heart of Merrifield’s case that his workplace was poisoned against him, right to the top.

For now, though, we’re looking at three possibilities:

1) White never told Paulson about the prima facie evidence against the officer gathered by the London police and, armed with little information, the commissioner saw fit to go before the Senate committee and trash Merrifield.

2) White did tell Paulson about the London police’s damaging information, yet Paulson still saw fit to proceed with his attack on Merrifield.

3) Either Paulson or White is not being full and frank about their interactions on this file.

None of these possibilities reflects very well on the RCMP’s leadership.

As for that senior officer reportedly seen in the john sting: He was never charged, and retired before he could face an internal code-of-conduct inquiry over the incident. He, too, is expected to testify in the coming weeks.