A vaccination success story in the far North

A team of immunizers faced hours of delays as they headed north to Old Crow, Yukon. They were treated to caribou stew, an overwhelming turnout and a jubilant celebration. 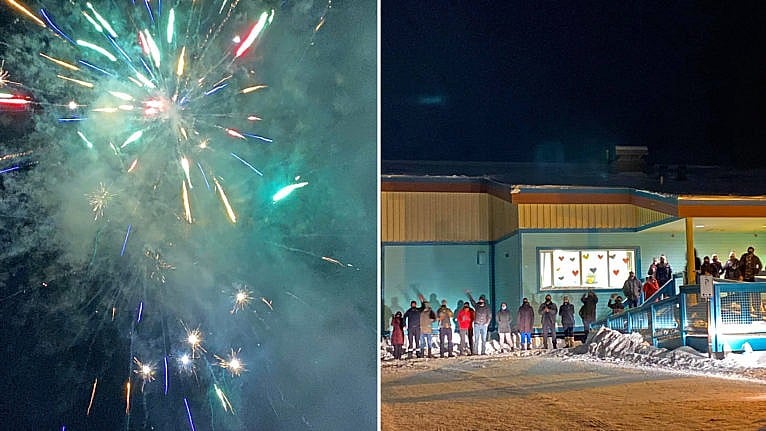 Dana Tizya-Tramm’s advice to anybody who visits Old Crow, a fly-in community on the banks of the Porcupine River in Yukon, is to take off their wristwatch. “You don’t need it anymore,” says Tizya-Tramm, the chief of Vuntut Gwitchin First Nation. The closest town is hundreds of kilometres away, and Whitehorse is a two-day trip by snowmobile. Old Crow’s remoteness is deeply calming, he says. “You can almost see the last waves of modernity crash on the rocks of our community.”

Even in Tizya-Tramm’s world, a global pandemic that seems only to be killing people in distant cities far removed from his Gwich’in people can spread fear and anxiety. Last year, a Quebec couple who drove to Whitehorse and caught a flight north—and promptly flew away the next day—reminded the locals that they’re never totally hidden from view. The virus could always be on the doorstep.

Those grave concerns about sickness and death were not abstract. The territory’s health minister, Pauline Frost, grew up in Old Crow and says elders pass along stories of the tuberculosis epidemics of the 20th century that ravaged the Gwich’in. Agnes Mills, the first Yukoner to be vaccinated against COVID-19, struggled against TB for three years in a Northwest Territories hospital. She was also from Old Crow. Everyone in town knows that a single outbreak could wipe out the whole community.

There’s one major difference between the outbreaks of the past and the fight against the novel coronavirus, says Frost. “We have access to health-care systems that we didn’t have historically.” And that includes vaccines.

When the federal government unveiled its immunization plan last December, Canada’s three territories were clear priorities. Every province would receive vaccine doses on a per-capita basis, but the territories would receive their entire supply of Moderna—the approved shot with less complex storage requirements—before the end of March. Yukon received its first shipment on Dec. 27 and rolled out its first injections on Jan. 4. 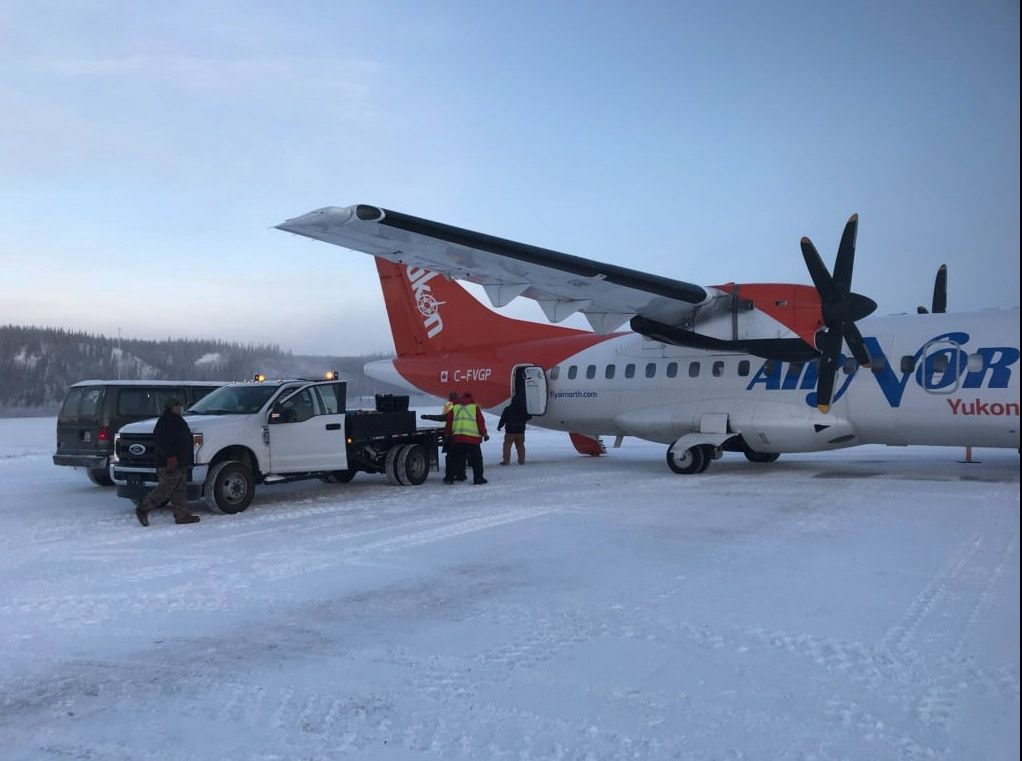 MLA Pauline Frost posted this on Jan. 22: “Old Crow, the vaccine is here and there is light on the horizon. The mobile vaccine clinic opens today at 3pm at the Chief Zzeh Gittlit School. I will be there receiving my vaccine and I encourage all citizens to join me. This is our shot, let’s take it!” (Courtesy of Pauline Frost)

On Jan. 22, only a few weeks after Agnes Mills was vaccinated in Whitehorse, a team of immunizers was supposed to take off for Old Crow at 5:30 a.m. They planned to inoculate residents all day before returning home after nightfall. But the weather wouldn’t cooperate. Fog had settled in, so the team waited. And waited. And waited. Ann Chapman, the clinical lead for the trip who personally shepherded Moderna’s vaccine to Old Crow’s school gymnasium, said they even debated postponing the trip—but everyone agreed to soldier on.

Before they left, Frost posted a Facebook video alerting the residents to a three-hour delay. Everyone who’d booked a shot would simply adjust their schedule. The team landed, boarded buses organized by the Canadian Rangers, thawed the vaccine, and started inoculations about 75 minutes after leaving the airstrip. The community had already disinfected the makeshift clinic and gifted their visitors a lunchtime spread of caribou stew and bannock.

By evening, the team still had some leftover vaccine they didn’t want to waste. But they worried a popular radio BINGO night—a weekly chance to virtually socialize—might interrupt the flow of inoculations.

Chapman says members of the First Nation scattered around to find willing residents. The team kept up the injections late into the evening.

Tizya-Tramm was in Whitehorse that night, but his sister, Paige, texted him with a question: Could they exhaust the leftover supply of fireworks from the annual New Year’s celebration? It was a no-brainer.

As the team snapped some staff photos in a school gym at around 10:30 p.m., someone burst into the building and announced an impromptu fireworks show. “Everyone runs to grab their coats, because it was minus-23,” says Chapman. “I got to see magical, lit-up skies in Old Crow, and they were all yelling, ‘Thank you COVID team! Way to go!’ ”

“It was this wonderful release that was able to happen because our people and the people delivering it, everyone involved, was so invested, so present,” says Tizya-Tramm. “Nobody gave up. Nobody walked away. Nobody missed their appointment. Everyone showed up that day.”

“They were all cheering, Mahsi-cho, which means thank you. Our whole team was cheering back. There were tears of excitement and appreciation,” says Frost. “On a cold, crisp night with beautiful stars in the sky.” 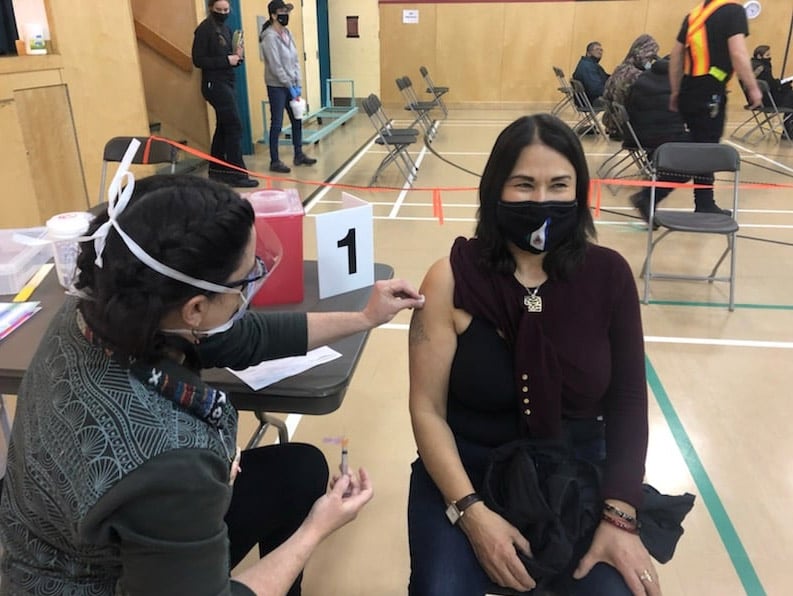 The immunizers couldn’t fly off into the night for several hours, because the charter’s pilots were mandated to take scheduled down time. They finally landed in Whitehorse at 3 a.m., and Chapman returned some equipment to a central depot. She got home at 4 a.m., about 24 hours after she’d woken up. Frost, who was awake at 3 a.m. the morning before, figures she was awake for 25 hours.

But every second of that trip was worth the payoff of immunizing 80 per cent of Old Crow and offering hope to the locals, she says. “Their grandparents would have told them about the epidemics of the past. Now we’re coming in and protecting the community. That’s what resonated so well, from the very young to the very old.”

On Feb. 19, the immunizers returned for a second round of shots. By the end of the day, four in five Old Crow residents were protected against a virus they’d managed to keep away for a gruelling year. Years from now, elders might tell pandemic stories not of suffering, but resilience. Keeping the disease away proved “what we’re capable of in the worst of times,” says Tizya-Tramm. “That’s something that COVID can teach us.”