Robert Snelgrove on what prompted his actions, how sorry he is, and what it’s like to be shamed by an Internet mob

During the Vancouver riot, Coquitlam, B.C. native Robert Snelgrove was caught on camera walking out of  Sears carrying stolen cosmetics. The next day, he turned himself into police. Snelgrove, 24, a cell phone salesman, has been suspended without pay from his job and may be fired. Below, he tells Maclean’s what prompted his actions, how sorry he is, and what it’s like to be shamed by an Internet mob.

Q: Tell me about Game 7. How did you end up downtown?

A: I’m not really a sports fan. I got involved because all my friends started watching the games. I live on Seymour at Robson, right above Granville Street, and I got caught up in the whole excitement of the city. It was really, really exciting. I was watching Game 7 at a friend’s condo in Coal Harbour. 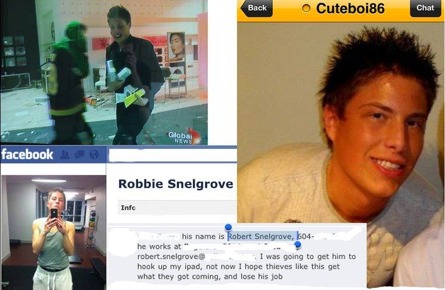 Q: When did you hear about the riots?

A: I had heard about it briefly on the news. Then, walking home, I found myself in the middle of it. It was like nothing I’d ever seen in my life before—like WWIII.

Q: At what point did you decide to jump in?

A: I don’t have a criminal record. I’ve never stolen anything in my life. I was standing outside The Bay, watching people breaking windows, smashing things, and lighting things on fire. I didn’t do that at all. When I saw multiple people break the window and walking out with stuff, I got caught up in it… It was a spur of the moment thing. Normally I would never think like that. I’m not trying to defend it, but it was one of those things—everyone’s doing it, so I might as well try it. I was quite intoxicated. I wasn’t in the best state of mind.

A: Not really. No. I know I’m smiling in the photograph online—I don’t know why I’m smiling.

Q: When did you realize you’d done something wrong?

A: The next day, as soon as I woke up. I would have brought the stuff back earlier but I actually had to go to work. I felt really embarrassed and ashamed and disappointed in myself. During the day I was really angry at myself, really stressed out, worried, concerned. I planned to go to the police and turn myself in.

Q: When did you realize your photo was on the Internet?

A: Thursday night. I started getting Facebook messages, tons of text messages saying: “die scumbag,” “thief,” “turn yourself in.”

Q: How did they get your phone number?

A: A customer of mine posted my number on the Internet, my email address and the store’s address.

Q: Why did you decide to turn yourself in?

A: I needed to do. I messed up. I can’t go back in time and not steal the items. But I want to do everything from now on to make it right.

Q: What did the police say?

A: They said it was the right thing to do. A couple of the police actually recognized me from the TV. There were no charges pressed. They didn’t arrest me. I gave a statement, explaining what I’d done. Some of my friends advised me to go in with a lawyer; I didn’t. The video speaks for itself. I just turned myself in. There’s not much more to say.

Q: What did your employer say?

A: My manager asked me to issue a statement. I explained what happened, and told them I went to the police. He gave me a suspension without pay.

Q: Do you think you could lose your job?

A: Yes, it’s a possibility for sure. A lot of my customers phoned my manager and were angry and upset. It definitely left a bad taste in the mouth of the company.

Q: Do your parents know?

A: They actually saw it on TV, on the news. They were pretty disappointed, pretty shocked. They’re worried about my job. I’ve never done anything like this. It’s pretty depressing.

Q: Have you lost any friends over this?

A: My boyfriend broke up with me on Thursday, the day after it happened.

A: The first three days I didn’t eat anything. I just felt sick. I felt too ashamed to go outside my apartment. I went outside yesterday for the first time. But the weekend was message after message of hate.

Q: How many messages have you received?

A: Around 150—emails, text messages, voice mail, calls, most from random people, some of it borderline harassment.

Q: Do you feel you deserve some of what you’ve gotten?

A: Definitely. For sure. I did something wrong. And I definitely deserve some criticism. But some of the comments online are homophobic. I am gay. But it’s getting to the point where there’s a lot of hate. They’re calling me a “homo” and saying things referring to gay sex. I stole some beauty products, so they’re making comments about that, calling me “pretty boy.”

Q: If you could say something to the people of Vancouver right now, what would it be?

A: I’m deeply, deeply sorry. I’m really upset at myself for doing this. This whole mistake’s not who I am. I’ve never, ever done anything like that in my life before. I’m really sorry to the Vancouver Police, to my employer—to everyone who lives in Vancouver. I can’t change what happened. My number one priority is to try to do everything in my power to try to make it right.