A year after the explosion, Lac-Mégantic rebuilds

One year after the tragic train derailment and explosion, the tiny Quebec town struggles to find hope 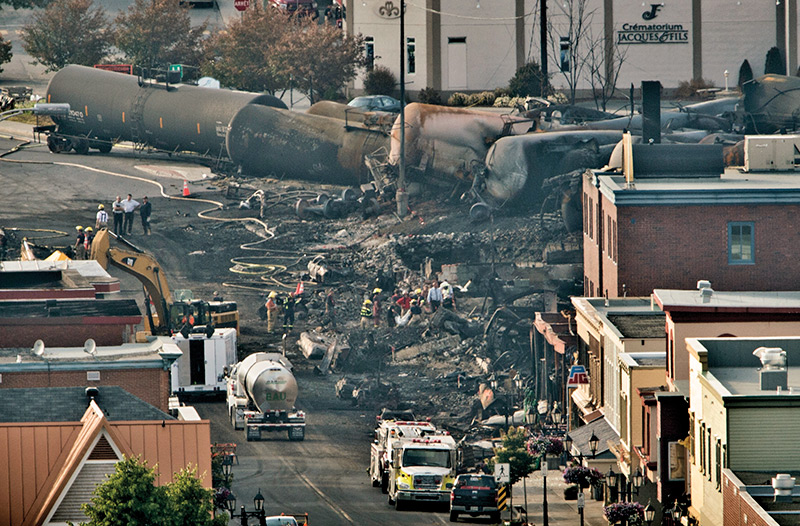 Lac-Mégantic fire chief Denis Lauzon remembers many things from that night. He woke up to a call from dispatch, telling him there was a house fire downtown. When he went outside he thought the sky was burning. He remembers practically running from the wave of burning gasoline roaring toward him and his men after they arrived on the scene. He remembers the lake catching on fire. He remembers the pressure-cooker whistle of boiling crude inside dozens of oil tankers, and the slow-motion mushroom cloud rising over the town when they exploded.

What he remembers most, though, is powerlessness. In the early hours of July 6, 2013, the 30-year firefighting veteran could only watch as the blaze erupting from the derailment of 72 oil tanker cars consumed Lac-Mégantic’s downtown.

“It was too big,” the 51-year-old burly father of two says today. “Normally we go inside the fire and kill it. Or we give it a sandbox where it can play and make sure it doesn’t go beyond there. But all we could do that night was make sure people were protected as best as possible. It’s hard to watch your town burn, to see store windows pop and know that’s where the fire was spreading, and you just have to stand there and watch it happen.” At that point, he didn’t think it possible that people were still in there. Surely they’d been evacuated.

They weren’t. A year after one of the continent’s worst rail disasters, the sense of powerlessness continues to permeate Lac-Mégantic, the southern Quebec rail town located roughly 15 km from the U.S. border. Forty-seven people perished that night in a fire so intense that five victims left no earthly trace by which to identify them. The flames long extinguished, the downtown and waterfront are now a fenced-off purgatory of construction equipment, burned out buildings and roving security guards—“a ghetto,” as resident Gilles Fluet calls it.

Though the town has constructed a “new” downtown core within throwing distance from where the old one lies in ruins, the slow pace of promised government compensation has meant few businesses have been able to reopen. With the main bridge through town still under construction, Lac-Mégantic is physically cut in half. On the subject of trains, its population is just as divided.

Hundreds of citizens have protested the return of oil tankers to Lac-Mégantic. Colette Roy-Laroche, the town’s mayor, has come out in favour of a bypass. Already, though, non-dangerous goods are flowing through Lac-Mégantic by rail again, and many are sure oil tankers aren’t far behind. “Dangerous goods are coming back to Lac-Mégantic,” says town councillor Johanne Vachon. “We hope it’s later rather than sooner, but the rail company loses a lot of money only shipping dry goods. The money’s in oil.

Raymond Lafontaine has heard and watched oil tankers roll through Lac-Mégantic for much of his life, and now knows powerlessness all too well. In the days following the blast, the 66-year-old—who owns of one of the town’s largest construction companies—became the embodiment of Lac-Mégantic’s collective rage and anguish. Having lost a son and two sisters-in-law in the blaze, Lafontaine appeared on television networks across the country, decrying how what he called “an atomic bomb from the west” was allowed to travel through downtown.

Today, he alters between despair and pride. Sipping a Diet Pepsi at Lac-Mégantic’s sports complex—it has become the gathering spot after most restaurants burned down a year ago—he speaks in a low whisper. “It kills you, you have no more ambition. We haven’t healed yet, we only put a Band-Aid on what happened.”

He takes another sip and perks up. “We aren’t enraged. Only terrorists get enraged. We are builders,” he says. He now welcomes the return of oil tankers to Lac-Mégantic. New York-based Fortress Investment Group, which bought the assets from the bankrupt Montreal, Maine and Atlantic Railway, “is 200 per cent in favour of security,” he says. “We have to have trains in Lac-Mégantic. If we don’t, we become a ghost town.” 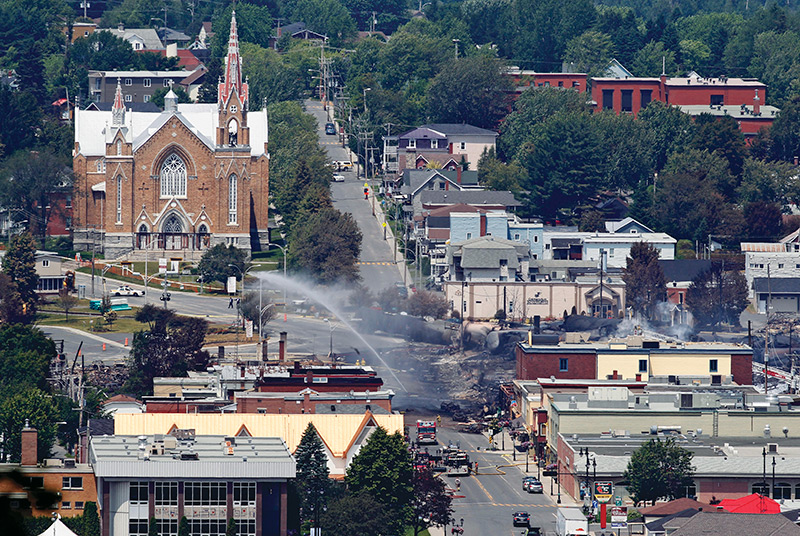 Indeed, most of the buildings destroyed in last year’s disaster were built to service the rail yards and its workers. Photographs from the 1950s show 13 rails entering the town’s downtown core; denying the train, Lafontaine and others say, would be to deny Lac-Mégantic’s very DNA. But the proposition infuriates Rémi Tremblay, who says a return to the status quo would be a further indication of the town’s lack of solidarity.

“What’s unfortunate is the sense of resignation,” says Tremblay, editor of Lac-Mégantic’s newspaper. “We had this amazing opportunity. We could rebuild our town, be an example for the rest of North America. But we don’t have the sense of social justice. If we did, our downtown would have been rebuilt already. It’s why oil will be running through downtown before downtown will even be finished rebuilding. It’s not pessimism, it’s realism.”

Certainly there is anger as well. Louise Latulipe is one of the many artists who was attracted to Lac-Mégantic, if only because the rolling hills and mountain-rimmed lake practically paint themselves.

Since July 6, though, flames and fences, representing the walled-off downtown core, have crept into many of Latulipe’s works. “Terror, fear, anger and sometimes hope,” is how she describes the last year. She flinches during thunderstorms now, and dreaded the idea of fireworks for the Saint-Jean-Baptiste holiday. “I was at an event and a microphone malfunctioned, making a heck of a noise, and I screamed,” she said.

In the distance, behind the fence, the work slowly grinds on. The provincial and federal governments have dispersed some $200 million for the cleanup and rebuilding of the downtown core, though according to the provincial government schedule, the fence around downtown will remain in place until at least December 2014.

Meanwhile, downtown is a purgatory in another sense. Most of the owners and businesses in the buildings demolished by the fire have received their compensation, while those in buildings that remain upright must wait to see if they are fit for occupation before they can receive government money, says Vachon. “I wish everything had burned. We have to maintain these buildings without knowing if the government is going to knock them down or not.”

Lauzon, meanwhile, tried to move on. He stayed on the job for eight months, through the October suicide of one of his firefighters and the death of his mother-in-law in November. He practised tai chi, went on long walks through the forest. He responded to about 50 calls during those eight months. He fought five fires.

On March 20, he couldn’t go on any longer. No specific incident sparked his decision to go on leave other than the feeling that he was about to hit a wall. He isn’t at all sure when he’s going to go back. “The event made you realize that life is short and you need to take advantage of it. The connections with my family are even stronger now. It’s like the town of Lac-Mégantic. It’s going to be a phoenix, it’s going to come back stronger than before,” he says.

Despite the worry about the return of oil tankers and the Kafkaesque conundrum of downtown, there are signs Lauzon is right. In the wake of the disaster, Lac-Mégantic school administrators brought social workers, psychiatrists and grief counsellors into the town’s schools in preparation for an enormous emotional fallout from area children upon returning to school last September.

It was all happily for naught. Out of the 400 students at the Sacré Coeur elementary school, five sought help. “We were waiting for the worst, but it didn’t happen,” says Sacré Coeur director Chantal Vigneault. “It was a great year. If they have food and a bed, young people are very resilient.”

Older people, too. For 43 years, Jacques and Violette Savard have lived in the same house about 300 m from where the train derailed. That night, the pair ran out into the street as fire surrounded their house and engulfed their neighbours’ homes. They were sure they would return to nothing the next morning, yet the house was still there, untouched. “I am very lucky that I can open my eyes and see this,” Jacques, 89, says from his balcony overlooking the fenced-in downtown.

He lost a few trees in the yard, but his geraniums didn’t so much as get singed. They bloomed again this year.