Abacus asks the big questions: Which leader would you let babysit?

Abacus Data asks some unique questions to get insight into the lighter side of politics: how Canadians perceive our leaders 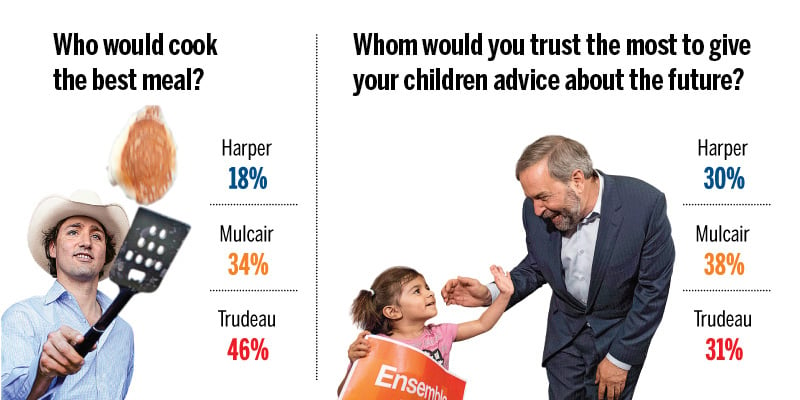 Abacus Data has been providing Maclean’s with exclusive data on the 2015 campaign. Most recently, its polls revealed a three-way race that is as tight as it’s ever been, showing that the NDP’s national support has waned just enough—weighed down by a new weakness in battleground Ontario—to allow the Liberals back in the chase.

As part of that deeper polling data, Abacus asked some unique questions that provided rare insight into how Canadians see the party leaders.  And while it’s true our electoral system means we vote for individual MPs, not a prime minister, there’s no way to ignore the fact that the perception of Stephen Harper, Thomas Mulcair and Justin Trudeau, currently roaming the country in an effort to connect with Canadians, will affect this three-way election.

So the questions may not seem particularly serious. “Who would you prefer to babysit your children for an evening?” isn’t a question you’ll hear at any upcoming national debate. But for better or worse, these kinds of questions may play a significant role when Canadians head to the ballot box come October 19.

The Abacus survey was commissioned by Maclean’s and conducted online Aug. 26-28, with 1,500 Canadians aged 18 and over. A random sample of panelists was invited to complete the survey from a large representative panel of more than 500,000 Canadians. The Marketing Research and Intelligence Association policy limits statements about margins of sampling error for most online surveys. The margin of error for a comparable probability-based random sample of the same size is +/- 2.6 per cent, 19 times out of 20. The data were weighted according to census data to ensure that the sample matched Canada’s population according to age, gender, educational attainment and region.