Abandon the foolish 'war on the car.' It's holding back our cities.

The proposed redesign of Montreal's Saint Catherine Street is innovative, needed—and a sign the driver-vs.-pedestrian rhetoric is tired. 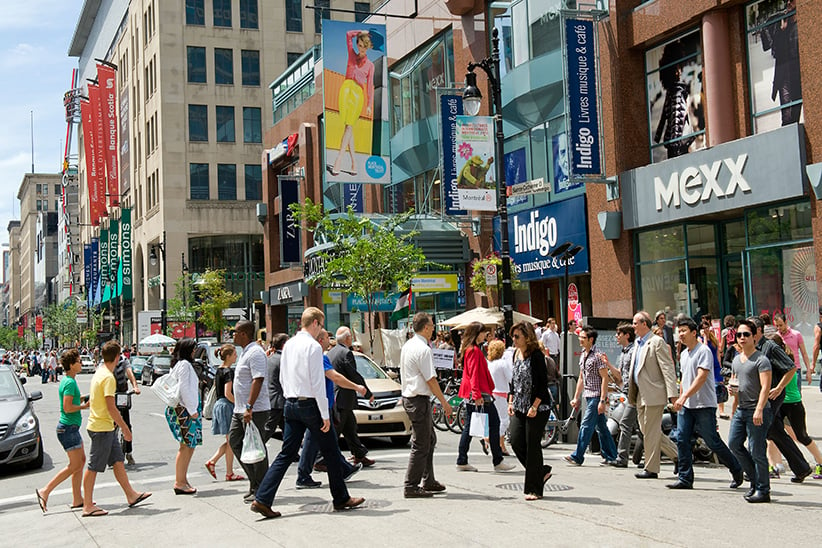 They had us at heated sidewalks.

Last week, the city of Montreal announced its vision for a redesigned Saint Catherine Street, one of the most important business and cultural districts in the country, as well as the host to numerous Stanley Cup parades. The project was made necessary by the ongoing collapse of 100-year-old infrastructure beneath the street, which has created sinkholes large enough to swallow backhoes. Beyond merely keeping the road in place, however, the project is an opportunity to reimagine the street itself. And, after weathering a tiresome car-vs.-pedestrian quarrel, the city’s final plan deserves applause for bringing together the often mutually exclusive concepts of innovation, flexibility and practicality.

But first, those sidewalks. A sidewalk that never needs to be shovelled or plowed—and remains permanently free of snow, ice and slush—is a fantasy for most Canadians, and will surely be a source of envy for everyone outside Montreal, if it works as planned. City officials haven’t announced what technology or energy source will be used, although cities in Japan, Norway, Iceland and Michigan have already established proof of concept. (Saskatoon is currently working on a similar idea.) In addition to the practical aspects of reduced labour costs, less salt and fewer slips and falls, the promotional value of a heated sidewalk could be massive, giving shoppers a reason to patronize downtown stores instead of climate-controlled suburban malls, come wintertime. As Quebec folksingers Kate and Anna McGarrigle observe in their song Complainte pour Ste Catherine: “I don’t look through shop windows / When it is 30 below zero.”

The most impressive aspect of the redesign of Saint Catherine Street is not these minor extravagances, however, but the flexibility to be built into the street itself. The plan does away with the familiar step-up curb separating road from sidewalk. Eliminating this feature allows the city to modify the street’s look and purpose throughout the year, as demand warrants. For the most part, the one-way street will feature two lanes of traffic and one lane of street parking on either side of the road. But, during summer months, this parking can be removed—effectively widening the sidewalk to create space for patio restaurants and other pedestrian-friendly attractions. Alternatively, parking can be restricted to just one side of the street. Or the entire streetscape can be converted into one wide, flat, car-free expanse for festivals and other special occasions, as is already the case along one portion of the street. It seems a wonderfully inclusive idea.

Much of the debate leading up to last week’s plan for Saint Catherine was driven by a familiar conflict of car vs. pedestrian that mars urban planning discussions in every large city. Montreal’s public health authority—an organization not known for expertise in road engineering or retail design —declared that the entire 2.2-kilometre stretch should be turned into a pedestrian mall, because this would “reduce the number of motor vehicles in the city’s core,” and, thus, make Montrealers healthier. Plenty of other groups sought to make a car’s life on Saint Catherine as difficult as possible by reducing lanes or eliminating parking. The trouble with this binary battle between driver and pedestrian (or driver and bicyclist) over road space is that a gain for one side inevitably becomes a permanent loss for the other. In truth, the demand on street space is not so black and white.

“The war on cars has not worked to our downtown’s benefit,” Stephen Léopold, chairman of the real estate firm Immodev, said in an address to the Board of Trade of Metropolitan Montreal before the release of the city’s plan, citing numerous earlier mistakes in urban design committed by his city. “The car is not our enemy.” The new plan recognizes this fact by allowing the roadway to grow or shrink, as needs dictate. And while some on-street parking will be lost to the redesign, the plan calls for Internet-enabled parking messages to direct drivers to empty spots quickly and efficiently. That said, unfortunately, the new plan reduces the speed limit to 30 km/h as a sop to car critics. While Saint Catherine often crawls along at such a speed during its busiest periods, that’s no reason to punish drivers at other times of the day. It’s a false note in an otherwise sound plan. Then again, speed limits, unlike the streets themselves, are easily changed.

If Montreal can pull this off on time and on budget, a civic government that has long been synonymous with corruption, bad governance and shoddy roadwork will win plaudits for its innovative and intelligent approach to competing urban interests. With its flexible roadbed, the city has given Saint Catherine Street the ability to change and evolve as needs and seasons change. Not only that: everyone’s feet will stay warm and dry year-round.