Accused in alleged Halifax shooting plot due in court Tuesday

Identity of the deceased suspect has not been released by police 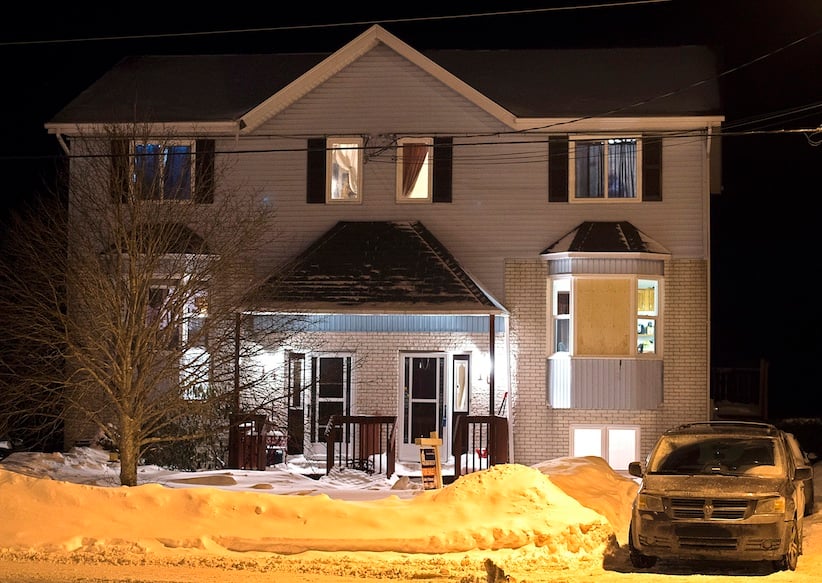 A house in Timberlea, Nova Scotia, where a body was found early on Friday, Feb. 13. (Andrew Vaughan, The Canadian Press)

HALIFAX — A man who went to rock shows with one of the young men alleged to have been planning a Valentine’s Day shooting on a Halifax mall says his acquaintance never spoke of guns to him.

Call centre worker Vincent Appleton said he was friends with Randall Steven Shepherd, 20, who was charged Saturday with conspiracy to commit murder.

“It throws you back a little bit. It gives you pause,” said the 35-year-old, who had planned to spend Saturday morning at the Halifax Shopping Centre, where police allege the attack was to take place.

Lindsay Kantha Souvannarath, 23, of Geneva, Ill., has also been charged with conspiracy to commit murder. And police found a 19-year-old suspect dead in a house in suburban Timberlea on Friday.

The identity of the deceased suspect has not been released by police, but some published reports have put a name to the 19-year-old.

Appleton said he was friends with the young person named in those reports, as well as Shepherd, and that he went to rock shows with them and had them over for a few beers at his apartment.

A social networking website believed to be linked to the deceased 19-year-old features pictures of weapons, Nazi symbols and images relating to the Columbine school shooting. Other pictures on the social media site show the young man posing with a rifle and a knife.

On Feb. 5, an image circulated on another account featuring the 19-year-old’s username and the phrase: “Valentine’s Day it’s going down.”

Appleton said Shepherd had appeared to him to be a “happy guy,” who was “rocking out his hair at the bar.”

Cindy Greenwood, a neighbour a few doors from the home where the young man’s body was found, said she knows Shepherd’s parents at the local Seventh Day Adventist Church.

“This is really shocking. … The parents are good people. They attend church. It’s a nice family. I’m not sure what they even know of this so far,” she said.

A former neighbour, Eva Schooley, moved into the same cul-de-sac a few months after the Souvannaraths in 2000 and lived across from them for about a decade, the Associated Press reported Saturday. She recalled them as “very nice people” and said they participated in frequent block parties, Easter egg hunts and Halloween parties.

“My granddaughters ran around with Lindsay,” she told AP. “`Lindsay was a little strange. I think at one point she went kind of gothic on us for a while. She liked to dress in black, the whole gothic style.”

Police said Souvannarath and Shepherd will be in court Tuesday to face the charges.