‘If we weren’t fearful, we could make change’

Valerie Langer first witnessed the power of mass protest as a 16-year-old exchange student in Anápolis—a tiny town in Brazil, when the country was transitioning from military dictatorship to democracy—and not always smoothly. After a teacher in her high school was taken by police for criticizing the government, students staged an impromptu mass protest that resulted in the teacher’s release. It was a defining moment, she says: “I saw that the things I took for granted politically, other people were fighting and dying for. There was this sense among youth that together, if we weren’t fearful, we could make change.”

Valerie, now the director of B.C. forest campaigns at Vancouver-based Forest Ethics Solutions, translated those lessons into a lifetime of environmental activism that included a stint at Pollution Probe. After moving to Tofino, B.C.—“the most beautiful place I’ve been in my life,” she says—the former literary teacher went to work with the activist group Friends of Clayoquot Sound*, which was founded in 1979. The group became known for protests and blockades against mining and forestry companies, insurgency that led to her arrest and a night in jail (the judge let them off on a technicality). “There’s a point where I want to obey the law, when the law is just and right,” says Valerie, who traces her attachment to forests to a canoeing camp in northern Ontario as a young girl. “I don’t want fear to prevent me from protesting a law that’s not.”

These insurrections would prove to be auditions for the group’s blockade against B.C.’s decision to allow clear-cut logging in the temperate rainforest in the summer of 1993—at the time, the largest peaceful civil disobedience campaign in Canadian history, garnering international headlines. The protest, which drew more than 12,000 people and saw more than 800 arrested, was strategically organized to transition the protests from a local-level skirmish into a full-blown political problem played out on the international stage, says Valerie. “We’d seen more than 100 arrested in protests over four years and the rate of cut kept going up. No one saw us as a threat.” Everyone involved was trained in the principles of non-violent direct action, she says. “People who refused were escorted away.” 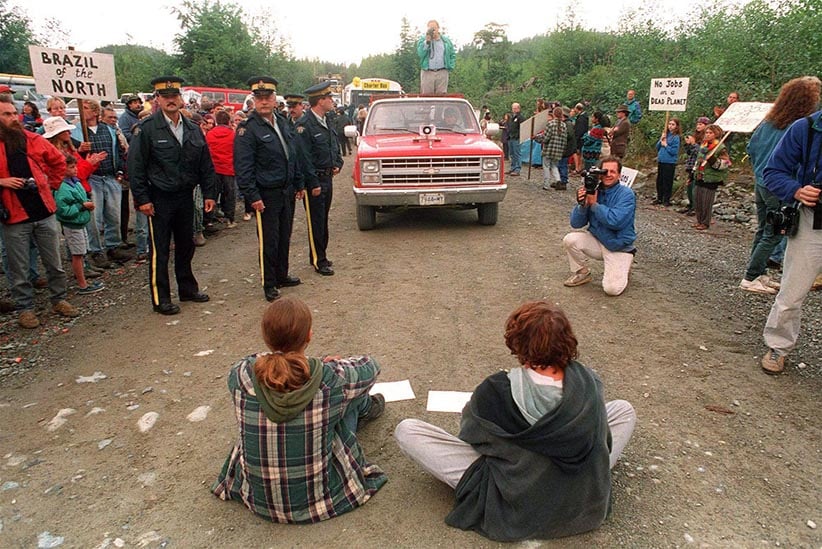 The campaign’s second tack would be a marketing campaign targeted at international companies buying wood and paper products. “We went after customers and asked them to cancel contracts with Macmillian Bloedel,” Valerie says. “After tens of millions in contract cancellations, the companies and provinces realized they would need to shift.”

The 1993 Clayoquot experience also provided Valerie with an introduction to the interconnection between human rights, social justice and land conservation issues, she says: “People had been alienated from traditional land by governments who had taken the rights to lands and handed them to industry, who were industrializing the landscape at an unbelievable pace.” More than 20 years later, Valerie’s activism remains intact. ForestEthics, with other environmental organizations and forest products companies, has embarked on what’s billed as the largest conservation initiative in history: the Great Bear Rainforest Agreement.* If Valerie Langer’s track record is any indication, she won’t quit until it’s signed. — Anne Kingston


CORRECTION, July 6, 2016: An earlier version of this post erroneously named Valerie Langer as a co-founder of Friends of Clayoquot Sound, and it also misnamed the Great Bear Rainforest Agreement. Maclean’s regrets the errors.