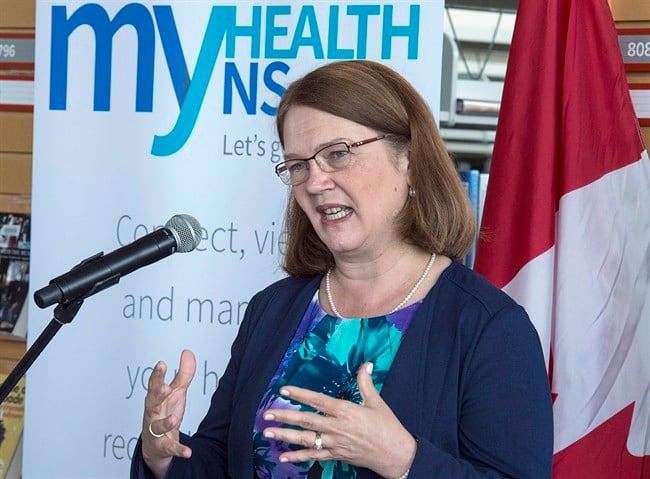 Federal Health Minister Jane Philpott addresses the crowd at the launch of MyHealthNS, an online health tool to improve access to doctors and access to care, in Halifax on July 28, 2016. (Andrew Vaughan/CP)

HALIFAX – Canada trails the pack when it comes to mental health funding levels among comparable industrially developed nations—but advocates say a promise from the federal government to improve services means the time is ripe to push for change.

“Access to care is abysmal in most places throughout the country and of course that’s linked … not only, but very much to funding,” said Louise Bradley, executive director of the Mental Health Commission of Canada, in a recent interview.

“We’ve been told to do more with less for a very long time. I think the rubber band is stretched as far as it can go.”

Bradley’s organization and others, such as the Canadian Mental Health Association (CMHA), have been calling for the mental health share of health spending in the provinces and territories to increase by two percentage points over the next decade—from a national average of seven per cent to nine.

Canada’s funding levels rank near the bottom among a list of OECD countries, a point of concern for the Trudeau Liberals who have pledged to make improved access to services a priority since coming to power last fall.

Bradley says she’s cautiously optimistic something can be done through the upcoming round of discussions on a new health funding agreement between Ottawa and the provinces — but even that modest increase would leave Canada behind countries such as New Zealand, Australia and the United Kingdom, where funding levels range from 10 to 14 per cent.

Most Canadian jurisdictions are proportionally in the same funding range or slightly higher than Nova Scotia, which earmarked $275 million out of its overall $4.1 billion health budget for mental health services for 2016-17.

Bradley said the numbers simply don’t meet the demands of a growing burden of care for the overall health system and for the economy at large in terms of lost productivity, at about $50 billion a year.

Steve Lurie, executive director of CMHA’s Toronto branch, said research has found that the mental health disease burden in Canada’s most populous province is 1.5 times that of cancer and heart disease and seven times that of infectious disease.

Yet Lurie said Ontario invested about $500 million over a 10-year period for mental health compared to $16 billion in other areas of health care.

“What this manifests as, is that people are denied the treatment they need,” said Lurie. “There are wait times to get everything from psychotherapy to assessments to get into supportive housing.”

Lurie said in recent years a number of provinces have funded initiatives that, if “scaled up appropriately,” would make a big difference.

He said Ontario has funded assertive community treatment teams, which are multi-disciplinary teams that target people with complex mental illness. Lurie cited research that indicated the teams could reduce the time patients spend in hospital over a six-year period from 50 days a year to just 10.

Lurie said the teams can support about 5,000 people in Ontario, which has the largest number of teams.

“But relative to the percentage of people who are living with schizophrenia or other psychotic disorders, you could easily double the capacity of the assertive community treatment teams in Ontario,” he said.

Lurie said another cost-effective initiative that could prove effective nationally is a CMHA program in British Columbia called Bounce Back, which provides telephone coaching to those dealing with anxiety and depression.

“My pitch would be, it’s not like we don’t know what to do … it’s just that we are not funding them (programs) at a sufficient level.”

Patrick Smith, national CEO for CMHA, said the improvements mental health organizations and other advocates have been asking for do not amount to a “Cadillac system” and would still leave Canada behind many other countries.

He said he hopes Ottawa will target areas such as mental health for more support, even as the provinces call for more money overall through the funding formula.

“We really do need investment,” said Smith. “I think it needs to be a mix … but not transferring money and crossing your fingers and hope they (provinces) do the right thing.”

Whether the provinces will readily accept targeted funding for Ottawa’s health priorities is still an open question.

Some premiers have said they are willing to listen, but Quebec Premier Philippe Couillard made it clear following last month’s premier’s meeting in Whitehorse that his province is “totally opposed” to the idea.

During a stop last month in Halifax, federal Health Minister Jane Philpott said the government realizes that Canada does not invest in mental health as well as other countries do.

“It’s a fundamental part of our plan in terms of what we want to be talking to the provinces and territories about and that is making sure that Canadians will have better access to mental health care,” said Philpott.

She said there should be ways that governments can show that the money is being used well and that talks with her provincial counterparts on that point were continuing.

Meanwhile, Bradley, a hospital administrator for most of her career, said she understands the pressures at play in the health system and how mental health has historically struggled as a result.

“The proof will be in the pudding,” said Bradley. “I do feel that unless it’s protected funding, there is the risk that it will go to something else other than mental health.”