Advocates urge feds to reduce number of women in prison 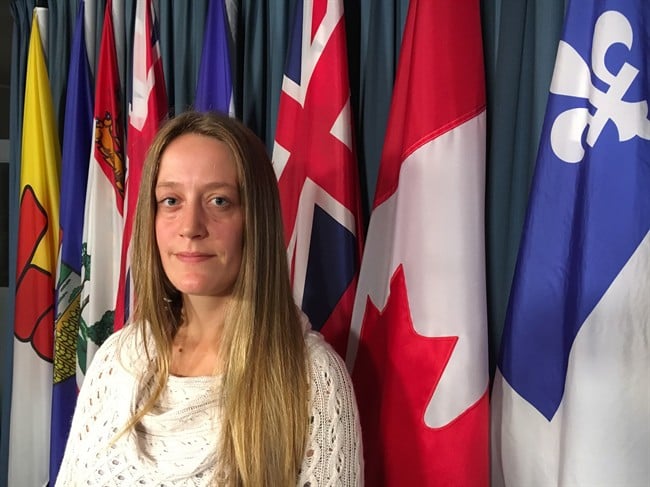 Alia Pierini attends a news conference where prisoners’ rights advocates called on the Liberal government to take steps to reduce the number of women behind bars, in Ottawa, Thursday, Nov.3, 2016. Pierini says she still suffers from anxiety as a result of the time she spent in solitary confinement. (Joanna Smith/CP)

OTTAWA – Sometimes when she goes to the grocery store, all Alia Pierini can do is sit in the parking lot, unable to bear the idea of going inside.

She tries a different store, but Pierini, 31, often ends up coming home without the food she had planned to buy for lunch.

“I feel like a big loser, to be honest, but I can’t help it,” the former prisoner told a news conference Thursday as she described the lingering anxiety, panic and fear she still feels as a result of months spent alone in solitary confinement.

Pierini, from Chilliwack, B.C., was behind bars for 44 months after she was convicted on drug and assault charges. The last stretch of time she spent in solitary lasted a full eight months.

Even though she was released nine years ago, she still remembers feeling depressed and anxious as the thoughts swirled around inside her head. She remembers being given three squares of toilet paper to use for an entire day.

And she remembers feeling like she wanted to die.

“Sitting in a cage is not meant for a human,” said Pierini, who took part in a CBC reality television show hosted by Kevin O’Leary called Redemption, Inc.

Now a regional advocate for female prisoners in federal custody, Pierini joined the Canadian Association of Elizabeth Fry Societies, which provides support for women and girls in the justice system, in calling on the Liberal government to reduce the number of women behind bars.

The association’s longtime executive director, Kim Pate — newly recommended for the Senate by Prime Minister Justin Trudeau — urged the government to give judges the discretion to overturn or alter the mandatory minimum sentences brought in by the previous Conservative government.

Pate also recommended making more use of sections of the Corrections and Conditional Release Act that allow federal inmates to be transferred to a provincial facility — or a hospital, such as in cases of mental illness — and for aboriginal communities to provide their own correctional services.

“The challenge has been inadequate supports,” said Pate, who called on the government to focus more on prevention.

“We need to be looking at those individuals who are in the community and are at risk of being marginalized, victimized, criminalized and institutionalized and stem that tide.”

Pate also said she was “heartened” to see Justice Minister Jody Wilson-Raybould given a mandate to restrict the use of solitary confinement and improve the treatment of prisoners with mental illness by implementing recommendations from the Ashley Smith inquest.

Smith was an emotionally disturbed 19-year-old who died behind bars in 2007 after tying a strip of cloth around her neck. Guards who were ordered not to intervene stood watch outside her cell.

It’s been three years since that report was released, said Pate, noting she wants to see action as soon as possible. Limiting or ending the use of segregation cells for women and people with mental health issues would a good place to start, she added.

Public Safety Minister Ralph Goodale, who is working with Wilson-Raybould on reviewing the inquest recommendations, has said that when it comes to administrative segregation, the government is looking at reforms that touch on everything from policy and programs to physical infrastructure and hopes to have specific proposals sometime this winter.

“We need to dramatically change the scenario, and we’re working at that,” Goodale said last week.

Poised to assume her new role as a senator this month, Pate said she plans to continue advocating for women in prison.

“This will be an ongoing issue, from my perspective, wherever I am, no matter in what capacity I’m working.”