A spokesman for the prime minister's office denied anything official had been prepared, though sources say otherwise 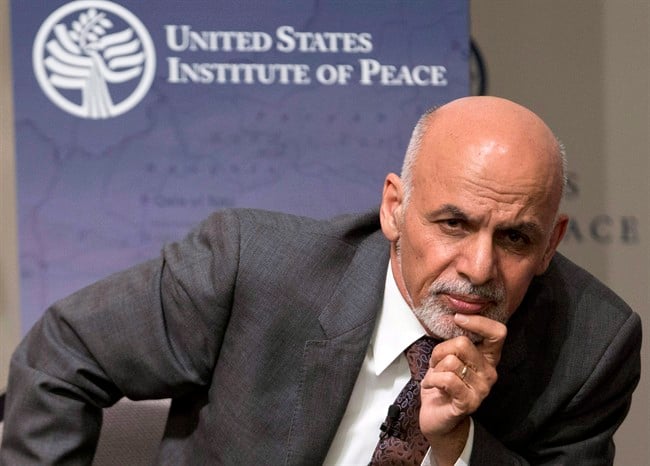 Afghanistan’s President Ashraf Ghani listens to a question from the audience at the United States Institute of Peace in Washington, Wednesday, March 25, 2015. (Carolyn Kaster/AP/CP)

OTTAWA – A series of diplomatic sources say Afghanistan’s newly-elected president, Ashraf Ghani, was prepared to stop in Canada following his recent trip to Washington, but the Canadian government quietly backed away from the plan before it was finalized.

Stephen Lecce, a spokesman for the prime minister’s office, denied anything official had been prepared for the new president who was elected following a closely fought campaign last year.

“No visit was scheduled, however we continue to engage with the Government of Afghanistan at all levels,” he said in an email.

A spokesman for Foreign Affairs, Nicolas Doire, also insisted no invitation was extended to the Afghan government.

But sources — in Ottawa, Washington and Kabul — tell The Canadian Press a plan for a two-day stopover was sketched out by the Canadian embassy in Kabul and the Afghan foreign ministry, and that Ghani had “responded positively” to the idea of a two-day trip for talks with Prime Minister Stephen Harper.

The proposal fell apart on — or around — March 23 when Canadian officials balked at the size of the delegation of up to 75 people — something that would have required state visit-style preparation.

Perhaps most significantly, Ghani would have been in Canada right at the height of the debate over extending the combat mission in Iraq. New Democrat defence critic Jack Harris says the visit would have been awkward for Conservatives trying to sell Canadians on a new war.

“I don’t think this government wants to be reminded of the lack of success there,” he said. “They don’t want to revive those questions and memories of Canada’s involvement with questionable results in Afghanistan. I think that this would have been in their face and the face of Canadians at a time when they’re signing us on to another open-ended commitment in Iraq.”

Diplomatic and Afghan government officials, who could not speak publicly because of the sensitivity of the subject, said the trip was billed as a chance for new leader and the Afghan government’s chief executive officer, Dr. Abdullah Abdullah, to personally thank Canadians for the sacrifices, notably the deaths of 158 soldiers.

It would also have given them an opportunity to lobby for continued economic development and financial assistance, specifically a long-term commitment for security force funding.

The stopover was encouraged by Canada’s ambassador to Afghanistan, Deborah Lyons, and officials in Washington, who feted Ghani at White House and U.S. State Department functions between March 23 and 25.

Both Harper’s office and Foreign Affairs were given the opportunity to reconcile the accounts, but declined.

A senior Canadian official, who was not authorized to speak the media about the subject, insisted on background that the prime minister’s office wasn’t aware of the proposal.

It was, however, well known at the Foreign Affairs level. The preliminary discussions in Kabul and the sounding out of Ghani’s office was considered an informal invitation.

Once given the blessing by Stephen Harper’s office, a formal invitation would have been issued, but it appears it didn’t even get there.

Western diplomatic and Afghan sources, with knowledge of the exchange with the Canadians, confirm that following the discussion over delegation size, no formal invitation was issued to the Afghans, but a visit would considered at a later date.

Roland Paris, the chair in international security and governance at the University of Ottawa, says putting off the visit sends an unfortunate signal.

“Afghanistan seems to be totally off the radar screen and this communicates a lack of interest in the relationship with Afghanistan and its newly elected president,” he said.

“It’s a country that’s a major recipient of Canadian aid dollars and a place where Canada has invested a huge amount of money and blood.”