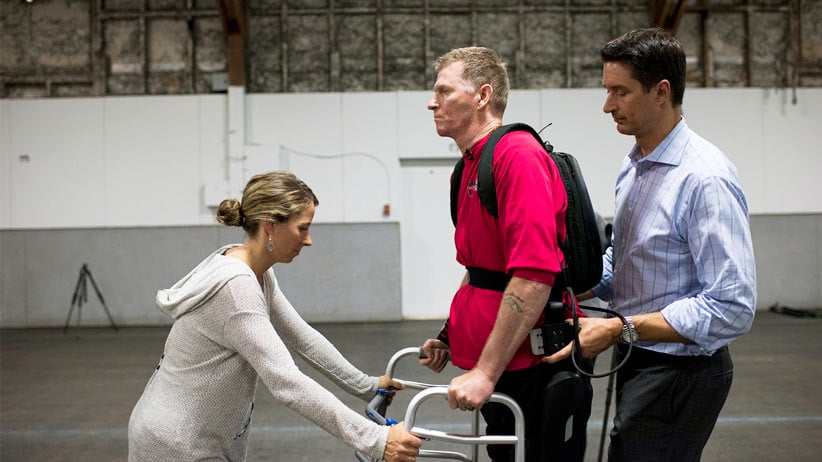 Trevor Greene learning to use the reWalk exoskeleton in Nanaimo, BC on August 5, 2015. Photograph by Jimmy Jeong

“I smelled smoke and feces through my nostrils and as I stepped to the ground my boots sank ankle deep into a fine dust,” he said Tuesday.

Greene said those first steps in Afghanistan in 2006 are — like the births of his children — “marked indelibly on the soul.”

The retired Canadian soldier received an honorary doctoral degree in education from the University of Victoria during a graduation ceremony Tuesday, nearly a decade after he almost died in Afghanistan where he was hit in the head with an axe.

The Seaforth Highlander called the award, “a great honour.”

Greene said he was sipping tea with village elders near Kandahar during a peacekeeping gathering, when a 16-year-old male pulled a stone axe out from his robe and struck blows to his skull, leaving “my brains leaking in the sand.”

The Canadian soldiers had removed their battle helmets as a sign of trust and respect to the Afghan elders, but the youth’s axe attack was the signal to launch a Taliban ambush.

Now 50 years old, Greene said he has long since forgiven his attacker who was convinced by the Taliban “his only route to paradise was to kill an Infidel.”

Greene said he believes if the teen had known how to read, and read the message of love and tolerance in the Koran, he would not have been fighting for the Taliban.

“Instead, he was swayed by an evil group of people into an act, unthinkable,” said the retired soldier.

Recovering from his brain injury is a daily struggle, but Greene said it has been worth it. He has re-learned much of his motor skills and is now able to stand with the aid of a walker.

Greene has become an advocate and inspiration for brain injury survivors, and said he believes his brain has been one of the world’s most studied organs.

“It gives hope to brain injured people who are told there’s no healing after six months,” he said.

Prior to the convocation ceremony, Greene told The Canadian Press his honorary degree holds special significance for him, especially since it came hours before Remembrance Day.

He said Nov. 11 is an emotional day for him, just as it is for all Canadian veterans.

“I’ll be honouring the fallen and before Remembrance Day it is fitting to be recognized for something that happened in Afghanistan,” Greene said. “I’ll be crying probably at taps and the lament.”

Greene and his wife, Debbie Greene, published his memoir, “March Forth,” in 2012.

Before volunteering to serve in Afghanistan, Greene worked as a journalist and covered issues related to the disappearances and murders of women in Vancouver’s Downtown Eastside.

The uniform Greene was wearing the day he was attacked is displayed at the Seaforth Highlanders Regimental Museum in Vancouver.