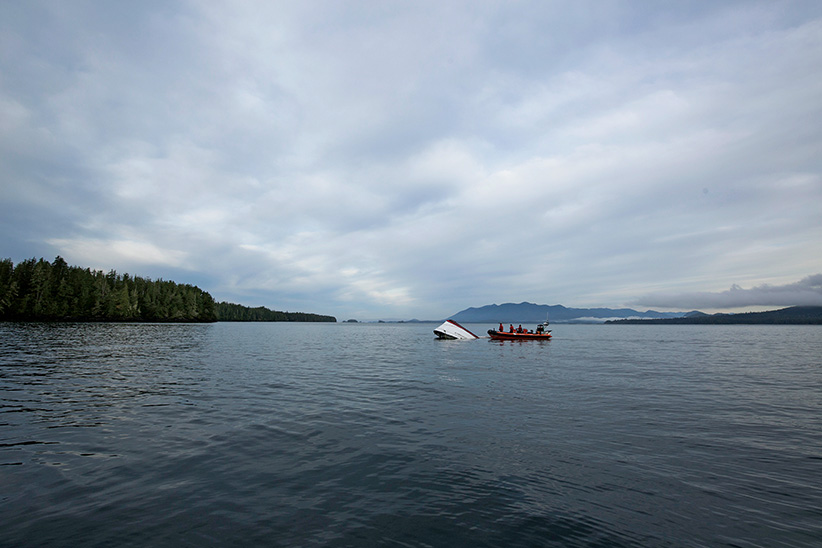 The capsized whale watching boat Leviathan II, off the coast of Tofino, B.C., on October 27, 2015. (Photograph by Adam Chilton)

VANCOUVER – The Transportation Safety Board says a large, breaking wave hit a whale-watching vessel off British Columbia’s coast in October 2015, overturning the boat and dumping passengers and crew into the water.

The board makes three recommendations after the fatal capsizing, including that all commercial passenger vessels operating beyond sheltered waters carry emergency radio beacons that indicate their positions.

BIG READ: Inside the sinking of Leviathan II

Six people, five Britons and one Australian, died in the capsizing and 21 others were rescued on Oct. 25, 2015, near the resort community of Tofino.

The board also recommends that passenger vessels across Canada adopt risk-management processes that identify hazards, such as areas known to have large, breaking waves. 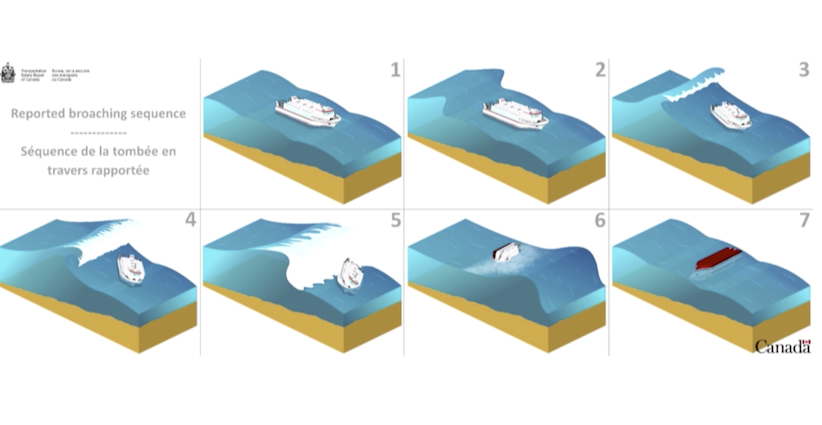 An illustration from the TSB report presentation shows the large wave that capsized the Leviathan II (Source: TSB)

The report says search and rescue authorities were not aware of the capsizing for 45 minutes because the crew didn’t have time to transmit a distress call and it was only by chance that they were able to activate a flare, alerting rescuers nearby.

In the days after the capsizing, the board said many passengers were standing on the top deck on one side of the ship when a large wave hit the opposite side, rolling the boat and sending the passengers and crew into the water.

Clinton Rebeiro, the investigator in charge for the board, said offshore waves travelling over a rising ocean floor and meeting opposing tides can cause waves to become higher or steeper, but determining when that will happen “is almost impossible to predict.”

“The nature of sea and the process that combine to form breaking waves in shallow areas are complex,” he told a news conference Wednesday in Vancouver.

In the case of the Leviathan II, the wave was about the height of the top of the bridge, Rebeiro said.

Court documents filed last year by the vessel’s owner in response to a civil lawsuit by several passengers describe the event as an “act of God” that could not have been reasonably predicted.

Survivors described being thrown into the ocean without life jackets, grabbing hold of a single life ring that floated in the waves.

The role of the safety board is to investigate marine, pipeline, rail and aviation incidents but it does not assign fault or determine civil or criminal liability.

The RCMP are also investigating the incident and Cpl. Tammy Douglas said Tuesday the file remains open pending the report.

Statistics from the Transportation Safety Board show that between Jan. 1, 2010, and the Leviathan sinking in 2015, there were 23 “reportable occurrences” involving whale-watching boats in Canada. None were fatal but five of the incidents resulted in six people being seriously injured. Thirteen of those 23 occurrences took place in B.C.