After the High River flood

The province promised to pay for flood cleanup, but with only a trickle of money, residents are struggling

Allison Pedersen and her sons Brodie, 1, and Karson, 3. (Photo by Chris Bolin)

In the days after southern Alberta saw the worst floods in the province’s history, residents returned to dig sewage and river mud out of their homes. It was back-breaking work, but there was hope as streets filled with mountains of mucky belongings. Premier Alison Redford promised her government would do “whatever it takes” to rebuild the homes and communities damaged in the June floods.

These days, hope is fading in High River, the province’s hardest-hit community, where thousands of residents in the town of 13,000 remain displaced, waiting for government money to rebuild. When the money finally comes, many are certain it will not be enough. “Ever since Ms. Redford gave her pretty speech about looking after us all and helping us to recover, all we’ve heard from them since is what they’re not going to do,” says High River resident Carla Schmidt. “I feel really stupid now. I was defending. I was saying, ‘Ms. Redford said she was going to help us.’ ”

Carla sits beside her husband, Ron, in their garage where he just reopened his barbershop. The garage is in better shape than their 100-year-old home and attached business, which is stripped down to the frame. The home was paid for, the nest egg for the couple and their two adult daughters, both of whom have Down’s syndrome. A contractor said the Schmidts need at least $164,000 for repairs. The government’s Disaster Recovery Program—the DRP as it’s known in town—said the family will get $18,000 for the business and $30,000 for the home. They’re still waiting for the cheque. A friend launched an online fundraising campaign for the Schmidts to help cover the shortfall. So far, they’ve received more than $5,000 in donations.

It’s impossible to tell exactly how many in High River are still displaced. There are more than 1,000 people in Saddlebrook, temporary trailers in a dusty lot north of town. Like many, the Schmidts have relied on the generosity of friends. Others live with relatives, in one of the many holiday trailers parked on the street, or they are back in partially finished homes—some without furnaces. Unfit-for-habitation notices remain posted on doors. Downtown, most businesses are shuttered.

Disaster Recovery Program money is starting to flow. The government has made more than 2,300 payments across the province, worth $11.2 million. (More than 8,000 people applied.) Rick Fraser, the government minister appointed to oversee High River, knows people are frustrated and says the government is pushing to get money out. “We’ve been very clear from the beginning that this was not going to be an overnight process,” says Fraser. “Part of my role, where we’re at, is creating the right expectations.” As residents wait, the government partnered with the Red Cross to get furnaces and hot-water heaters in homes.

In the Hampton Hills neighbourhood, Allison and Kristian Pedersen’s home sat in a stagnant lake of water for 18 days. After a 94-day cleanup and drying process, they’re ready to rebuild the house they lived in for a year with their two young boys. There is one problem: money. “I’ve been crying today,” says Allison, as she stands in her living room, which is stripped to the frame. She points to a dip in the floor where the main beam is sagging. It needs to be replaced. Allison says it will cost at least $50,000 to repair her home; that’s with her extended family providing much of the labour. The tears stem from a conversation earlier that day, when a government employee said she should prepare to receive just a fraction of the money she asked for. “We’re scared right now and we’re ready to walk away, but we don’t know what to do,” she says.

Up the street from the Pedersens, Kristi Brehon and Jamie Ellice stand where their fireplace used to be, the spot where Ellice proposed just eight months ago, on the day the couple moved into the brand-new home. Like the Pedersens, Brehon and Ellice’s home is stripped. A crack above the doorframe in the master bedroom is visual proof of the two ruined main beams in the basement and two more that are damaged. Their builder estimates it will cost $161,000 to repair the home. As they wait to see how much the government will provide, words like bankruptcy and foreclosure are starting to enter their vocabulary. “We’re willing to absorb some of the costs, but if we’re $100,000 out, then we won’t fix our house,” says Brehon.

Amid much uncertainty, one thing is becoming clear: not everyone in High River will have homes rebuilt, as the government said. “They over-promised,” says Danielle Smith, the Wildrose Party Opposition leader who is also the MLA for High River. “If they had been more modest in what they were offering, I think they would have kept expectations down, but then they raised expectations and weren’t able to deliver.” 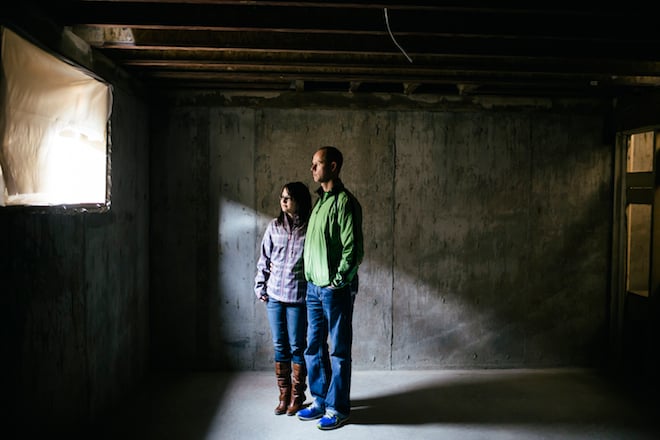 Kristi Brehon, 28 and her finance Jamie Ellice, 35, stand in the basement of their damaged High River home. (Photo by Chris Bolin)

The people who are moving back into their homes didn’t wait for the government. One block from the Pedersens, Catherine Smith and her husband, Matt, had water up to their main floor. Their insurer refused to cover them. When they got access to their home 21 days after the flood, a rainbow of blue, orange and yellow mould was halfway up the main-floor walls. Catherine, on maternity leave with a two-month-old baby and a three-year-old, turned to the funding website Gofundme to ask for help. The family raised about $15,000 from donations. “That webpage is the only reason we are going to move home before DPR pays us,” Catherine says. Matt, an electrician, is well-connected to other builders who donated supplies or labour.

Even as the luckier residents move back in, worries remain. The next flood season is just eight months away, and dikes and berms that were destroyed in June must be rebuilt in a short time frame. The next two months will be tough on High River, predicts MLA Danielle Smith, as residents realize they might only get 50 or 60 per cent of the government money they were planning on. “We’ve had a false sense of progress because we’ve had long days and warm nights. Now that we’re facing winter, if people don’t have their electrical panels redone, and their hot-water tanks and their furnaces and they can’t move back into their homes—we’re really going to see a lot of the anger coming out.”