How the federal competition bureau ‘is shifting the game’

Melanie Aitken has taken on everyone from the real estate industry, to credit card companies, to airlines 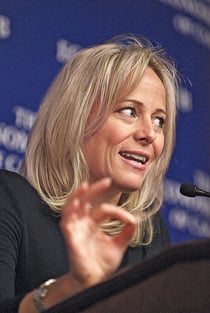 In Stephen Harper’s Ottawa, it’s not often that a public official makes a sustained splash. The Prime Minister prefers his bureaucrats quiet, diplomats discreet, and even high-level appointees, like Governor General David Johnston, unobtrusive. In this circumspect climate, Melanie Aitken, the commissioner of competition, stands out. As head of the federal Competition Bureau—the independent agency that enforces laws on anti-competitive behaviour—Aitken has taken on everyone from the real estate industry, to credit card companies, to airlines. The bureau has gone from largely invisible to impossible to ignore. “We are trying,” Aitken says, “to increase the accountability of companies that have taken advantage of Canadians, and show that there are consequences.”

Those consequences hit home for many last year when she pressured the Canadian Real Estate Association into opening up its Multiple Listings Service to brokers who don’t charge full-service fees. She is taking Visa and MasterCard before the quasi-judicial federal Competition Tribunal to try to end their practice of forcing merchants to accept all cards, including premium plastic that comes with higher transaction fees. In the telecom sector, Bell Canada agreed to pay a $10-million penalty after Aitken accused the company of advertising lower prices than were available, and she is pursuing Rogers Communications (owner of Maclean’s) over what she calls “misleading advertising” involving a discount cell service.

When was the last time the bureau was fighting on so many fronts? According to John Rook, a competition lawyer at the Toronto firm Bennett Jones, never. “It’s unprecedented,” says Rook, who worked closely with Aitken when she was at his firm, and sometimes takes on cases for her bureau.

Aitken touts her approach as “very much complementary” with the Harper government’s economic thrust. In at least one case, though, critics see her as undermining Canadian interests: she’s trying to block Air Canada’s joint venture with United Continental, arguing the deal would give the airlines a monopoly on key North American routes.

Aitken says Air Canada suggests it should be allowed to dominate parts of its home market to ensure it can thrive as a Canadian champion internationally. She rejects that economic strategy. “Canadian consumers and businesses,” she says, “ought not to pay the price for a company to be coddled at home so that it can stride about on the world stage.”

That’s typical of how she talks. “She’s not putting up with any guff,” says Rook. Aitken, 45, was named interim commissioner in early 2009, and appointed for a five-year term later that year. She’s a graduate of the University of Toronto’s law school in her hometown. In private practice, arguing a merger case against the bureau, she thought the government lawyers had the more intriguing job. That led her to a stint at Justice Canada, and then the bureau.

Perhaps inevitably, given her profile, some see her as a grandstander. “I just don’t buy it,” says Rook. “She is using the resources at her disposal, one of which is the bully pulpit, and that’s completely appropriate.” Aitken doesn’t apologize for being visible. “We’re still trying to shift the game a little bit,” she says, “in terms of saying, ‘Look, business community, these are the rules, we’re going to enforce them, and you might as well understand that.’ ” Anyone who hasn’t figured that out by now just hasn’t been paying attention.