Rob Ford will run for Toronto city council instead, he announced Friday. His brother Doug Ford has registered to run for mayor 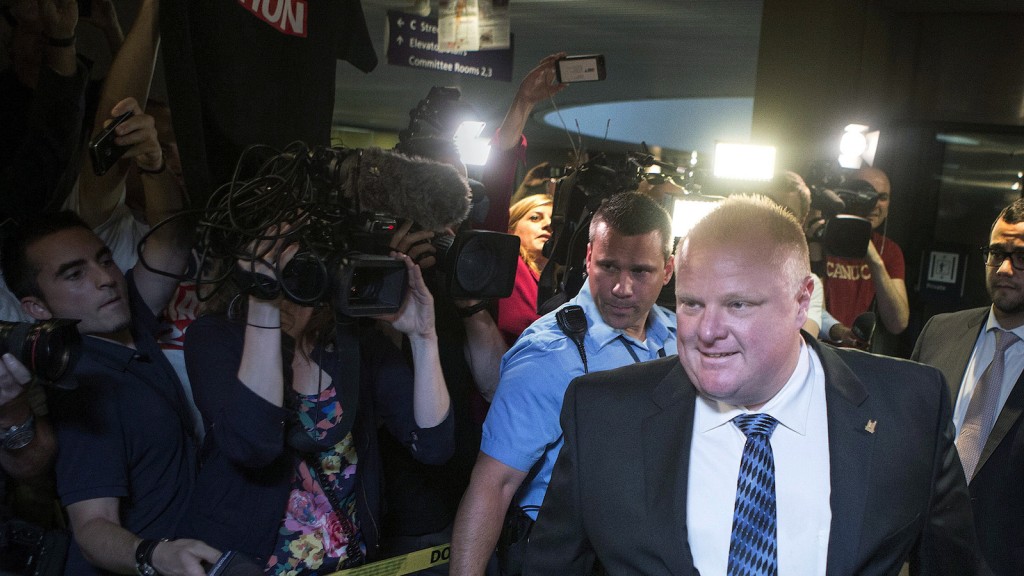 TORONTO – An ailing Rob Ford registered to run for Toronto city council today after abruptly dropping out of the mayoral race.

At the same time, his councillor brother, Doug Ford, registered to run for mayor.

Doctors had discovered the mayor had a “fair sized” abdominal tumour after his admission to hospital on Wednesday. It remains unclear whether the tumour is cancerous.

Ford has faced a series of drug, alcohol and other scandals over the past 18 months but had remained a viable contender for the October 27th vote.

A city hall official confirmed to a crush of reporters and photographers that the mayor had submitted his request just ahead of an official deadline to do so.

Ford, 45, whose admissions of crack-cocaine use, binge drinking and profanities make him a household name across much of North America, was admitted to hospital on Wednesday after complaining for months of abdominal pain.

After doctors discovered a tumour in his lower abdomen, they transferred him to a second downtown hospital on Thursday, where he underwent a biopsy on the growth and was slated to undergo further testing Friday.

Dr. Zane Cohen, an internationally recognized colorectal surgeon at Mount Sinai Hospital, said it would be about a week before it was known whether the tumour was cancerous.

Discovery of the tumour came just over two months after Ford returned to office from a stint in rehab that followed a scandal-plagued year in which he was forced to admit to using crack cocaine in a “drunken stupor,” was caught on video and audio recordings in profanity-laced rants, and became the target of an ongoing police investigation.

He narrowly survived a legal challenge that would have forced him out of office for breaching conflict-of-interest rules, and saw council strip him of most of his powers.

His litany of woes, gaffes and outrageous conduct made him an international celebrity and word of his illness garnered coverage around the globe.

Still, the often larger than life mayor — elected in 2010 on the strength of his cri-de-coeur of “it’s time to stop the gravy train” — continued to campaign for re-election even as he trailed in polls for the Oct. 27 vote but nonetheless remained a viable candidate.