Unlike the trial of Gerald Stanley, the case of Edouard Maurice has no apparent racial dimension. For angry property owners, it's becoming a yardstick case. 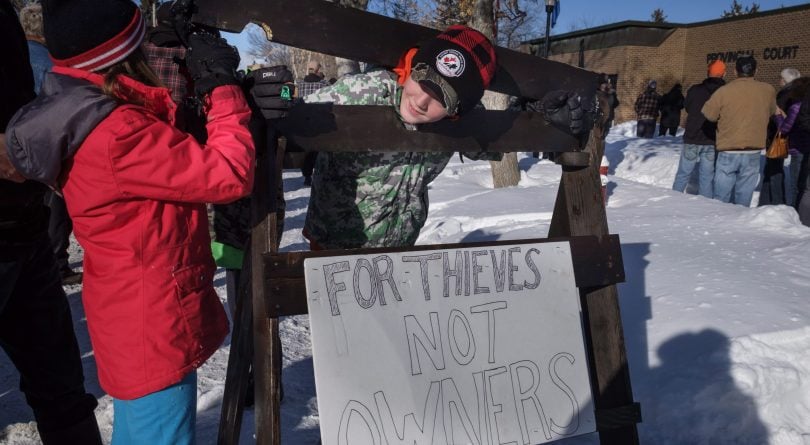 A young boy and girl play with homemade stocks as people gather in support of Edouard Maurice, who faces three charges after police allege the rural homeowner confronted two people rummaging through his vehicles and shots were fired, outside court in Okotoks, Alta., Friday, March 9, 2018. THE CANADIAN PRESS/Jeff McIntosh

Edouard Maurice exited the courthouse with his toddler daughter in his arms, wife and defence lawyer at his side and more than 100 people applauding him. That’s not your ordinary reception for a man charged with aggravated assault, reckless use of a firearm and another gun charge. But these are charged times on the Prairies.

On Feb. 25, two weeks after Gerald Stanley was acquitted of murder in the shooting death of Colten Boushie on his Saskatchewan farm, gunfire rang out on Maurice’s property just outside of the town of Okotoks, Alta., in response to alleged trespassers rummaging through a Maurice family vehicle just before Saturday dawn. One man fled; another was found with a gunshot wound to the arm.

His case was adjourned for a month; Maurice hasn’t yet entered a plea. To the hundreds of men and women who lined the sidewalk and street outside the courthouse, the 33-year-old welder is an innocent man dragged into a legal mess for defending his home and family.

“I’m not into shooting people with no reason, but you should be able to take care of yourself without having everything go crazy,” said Cam Maynes, who lives just south of there. “This poor kid, his whole life is in turmoil now because he was trying to protect his family and his kids. He’s now the criminal, and he’s never had a criminal record in his entire life.”

RELATED: The Gerald Stanley verdict is a blow to reconciliation—and a terrifying one at that

Just as the Stanley case came to a head in Saskatchewan, anxiety about rural crime was reaching a fever pitch in Alberta. Farmers and landowners had long been murmuring that it was a matter of time before someone got hurt, and that someone might just be a thief or trespasser. But unlike the death of Boushie, a young man from the Red Pheasant First Nation, there’s no apparent racial overtone to the shooting on that Okotoks-area acreage of Ryan Watson, a 41-year-old from nearby Calgary charged with trespassing, mischief, theft, methamphetamine possession and probation violation (less serious charges than those Maurice faces). Nobody supporting Watson made his or her presence known at the courthouse—the protest and discussions have been all about the rise in rural crime, and rights of self defence without fear of prosecution or punishment.

One man brandished a sign saying “Keep your city out of my country,” with a picture of a rifle-toting cowboy in leather chaps and long coat. Some children played in an old-style pillory, adorned with the message “For thieves, not owners.” Greg MacInnes, whose stepdaughter’s car was stolen from his farm last summer, said of Maurice: “What’s happened to him is pretty tragic.” A man who gave his name as Rick recalled his four guns being taken from the shop on his property. “The other guys are allowed to be on drugs, come onto your property, steal your stuff and then when you have to defend yourself with a weapon—because they’ve got weapons too, they stole ours—then we’re not able to defend our property.”

The Alberta RCMP acknowledge this much: in the last five years, property crime has risen by 41 per cent across their rural and municipal detachments in the province, while Alberta’s population only rose by eight per cent in that time. The force admits it’s a challenge to patrol and respond in spread-out or remote areas. But they also urge residents not to pursue or engage with suspicious individuals—residents lack the training, tools and powers to know how to handle them without risking injury (of somebody).

RELATED: In Saskatchewan, the Stanley verdict has re-opened centuries-old wounds

Travis Dunn, a Maurice family friend who’s fundraised for the accused man’s legal defence—$20,000 by Friday, between his campaign and another—says he’s heard that police warning about authorities knowing better than average residents how to handle criminal confrontations. “How can anyone react without the proper training? All’s they react with is instinct,” Dunn says. Under the circumstances, he reasons, the legal system should treat his friend with leniency.

The Criminal Code allows for defence of property, but only if “the act committed is reasonable in the circumstances.” The circumstances are not known in the Maurice case. Gerald Stanley’s lawyer successfully persuaded the fatal shooting was accidental, and didn’t argue self defence. At the rally in Okotoks, protest co-organizer George Clark and others demanded greater legal rights for self defence, and argued that the old schoolyard adage that one shouldn’t fight back against bullies was folly.

Clark’s presence highlighted another striking difference between Alberta’s and Saskatchewan’s fears of rural crime. There’s a greater political mobilization in Maurice’s province. A couple years ago Clark led a protest movement that claimed it could somehow procedurally overthrow Rachel Notley’s NDP government in what detractors mockingly called a “kudatah.” One of Clark’s fellow organizers, Cory Morgan, is a blogger and a political activist who once led the Alberta Independence Party. Away from this rally, Jason Kenney’s United Conservative Party and its mostly rural MLAs have been hearing from and amplifying those fed up with theft and intrusions onto their properties. Last fall, with dozens of rural constituents gathered in the legislature visitors gallery, one MLA declared that “rural Alberta is under siege,” while the house leader told the NDP ministers that if they weren’t in favour of an emergency debate motion (they weren’t), “you may as well be with the criminals that are victimizing my constituents.”

RELATED: No, rural Prairie dwellers, you can’t shoot to protect your property

The opposition party’s rhetoric, though, doesn’t extend to encouraging citizens taking the law into their own hands, says Angela Pitt, the UCP justice critic. “I wouldn’t say that reasonable force to protect somebody stealing some change from your car is to shoot them,” she says, cautioning she doesn’t know particulars of any one case. “But again, that speaks to the core of the problem and the desperation people in these communities are feeling. It’s not fair for the property owner to feel that’s his only option.”

In Saskatchewan, the conservative party is the party in charge. The Saskatchewan Party has tried to defuse rural crime fears by striking a travelling task force to hold public hearings. The Alberta NDP, which tends to get an earful on carbon taxes and its farm safety reforms whenever it wades into public forums outside the cities, hasn’t organized hearings. But on the same morning Maurice appeared at court and the rally, Justice Minister Kathleen Ganley joined the RCMP’s Alberta commanding officer to announce extra rural police officers and urban-style crime initiatives like intelligence-gathering task forces and “bait cars,” and even “bait farm equipment.”

“We prefer that everyone would leave the law enforcement to the professionals,” she told reporters.