Alberta has never had a one-term government. Will Rachel Notley's NDP be first? 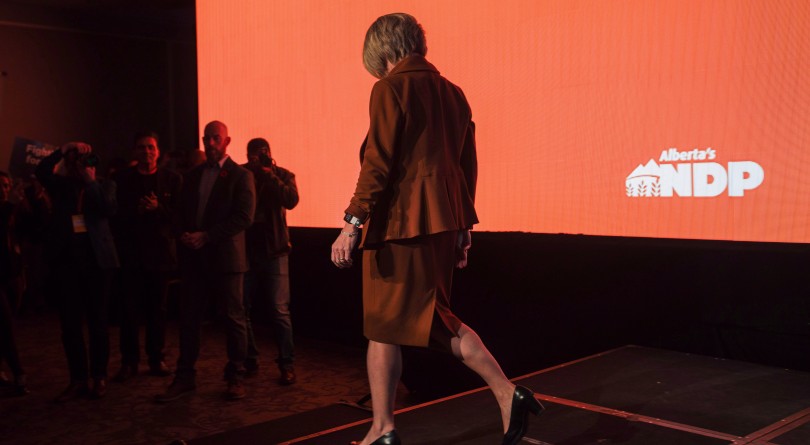 Rachel Notley leaves the stage after speaking at the Alberta NDP Convention in Edmonton on Oct. 28, 2018. (Amber Bracken/CP)

Rachel Notley riffed on elemental NDP themes near the end of her speech at her party’s fall convention: hope beats division, working together beats working alone, and being “our sister’s keeper.” Political boilerplate next line: “That is my conviction, and that is why I’m not done fighting, because we have only just begun.” Then, to wrap up, she stated two obvious facts. “My name is Rachel Notley, and I am running again to be your premier!”

To her fellow Alberta New Democrats, it was a throwback to the declarative statements Notley made in her 2015 stump speeches, themselves a nod to the late Jack Layton’s assertion that he was running for prime minister in 2011, when he came closer to that goal than any federal NDP leader in history. Pundits and rivals initially waved off her claim as wide-eyed optimism, until Notley’s sails were filled by a perfect storm—fury at the too-long-governing Tories and the near collapse of the Wildrose Party—and she won a majority by quadrupling the NDP’s traditional vote share.

At the close of 2018, Notley’s declaration sounds about as audacious as it used to. Coming into the spring election, the current premier is again an obvious underdog facing rotten odds. Pro-NDP sentiment in the province has definitively not quadrupled: a punishing recession, record budget deficits and the carbon tax sank the party’s popularity early on, and polls show it has never come close to the highs it enjoyed on voting day 3.5 years ago. More daunting still for Notley: even if the NDP miraculously repeats its 40 per cent haul in the popular vote, it would not be enough—not with the United Conservative Party (UCP), Jason Kenney’s consolidated right-wing squad, routinely polling above 50 per cent. Alberta has never had a one-term government before, but NDP rule is equally foreign here. Unless some profound, unforeseen shift reverses Kenney’s solid lead—and last time shows that zany surprises can happen—he’ll become premier next spring.

In some ways, the energy around Kenney’s party echoes the days of the old Tory dynasty, a 44-year power streak when the province often felt like a one-party state. In many ridings outside the NDP’s historical Edmonton base, UCP nominations have been as hotly contested as general elections, while there’s virtually no jostling for NDP slots. The opposition party and its aligned third-party groups dominate fundraising. In question period, the governing side often attacks more than it defends, as if it’s auditioning to be the official opposition. With this massive advantage, Kenney plans to test how much of a rightward correction Albertans are willing to make. More than just angling to erase the NDP’s four-year imprint on Alberta, he wishes to roll back the political moderation of the Progressive Conservatives before that, too.

In speeches over the course of his 2.5-year project to unite Alberta conservatives and drive them to victory, Kenney has traced a hagiography of past Tory premiers. It begins with party saint Peter Lougheed, leaps to the populist Ralph Klein—and that’s it. Absent are the four Tories who led Alberta after 2006; they belong to those fog-shrouded years when Kenney says the party lost its way, and the further-right Wildrose party ascended. His party’s mission statement is to “renew the Alberta Advantage”—the alliterative slogan Klein coined for his anti-regulation, low-tax provincial ethos, before King Ralph’s successors discarded the brand for something with less swagger. Kenney has spoken of rolling back a cluster of NDP policies and laws (promised first bill for the UCP: a carbon tax repeal act), and has a recent example to follow: Ontario Premier Doug Ford’s summer sitting at Queen’s Park to hastily bulldoze the Kathleen Wynne Liberals’ accomplishments.

After years of a gentler approach on climate change and anti-pipeline activists, Kenney vows a return to Alberta’s old pugnacity with a “fight-back strategy” involving a pro-oil information “war room” in the energy department, and by launching and funding third-party lawsuits against environmental groups—inflammatory measures that may divide even the oil sector itself. Kenney speaks fondly, too, of returning to Alberta’s flat-rate income tax (ended by Jim Prentice, the Tory era’s final premier), and of welcoming more privately delivered health care, a plank no premier has touched since Klein. “I think we’re going to have a mandate to be ambitious with a policy reform agenda,” he told Maclean’s in May.

Various impulses are behind his hawkish push. First, Kenney believes the economic and fiscal times demand it. “We’re broke,” he has replied to questions about the future of solar-panel subsidies and arts funding. Second, his new party includes most of those Wildrosers who found the latter-day PCs far too squishy, while some moderates bolted for the Alberta Party, a minor centrist faction. Third, Kenney’s inner circle believe Albertans crave conservatism; internal polling shown to Maclean’s indicates they prefer ditching the carbon tax and reducing spending rather than hiking taxes and piling on debt; they believe cuts need not affect front-line public services. A key UCP platform author is Mark Milke, a former senior fellow at the conservative Fraser Institute (and occasional Maclean’s columnist). In his newly released book, Ralph vs. Rachel, Milke writes that the post-Klein premiers “were little different from Canada’s perennial interventionist political collective, the New Democratic Party.”

Finally, this all speaks to Kenney’s own values. While he maintains he’s evolved from (or at least doesn’t want to act on) his earlier socially conservative positions on abortion and same-sex marriage, he proudly touts his days as an anti-tax gadfly and head of the Canadian Taxpayers Federation, which used to prod Klein to be more fearlessly conservative.

Provincial conservatives aren’t the only ones uniting behind Kenney. The federal Conservatives are keen to help the former Harper cabinet minister sweep Alberta next spring, after they’d long been split between Alberta’s PC and Wildrose factions. He’s the Canadian conservative movement’s most articulate messenger, and many of their number hope he’ll help combat the carbon tax. Restoring such a stalwart in the mythical conservative heartland, then, is a keenly sought prelude to ousting Justin Trudeau as Prime Minister—and one that’ll provide a much needed tactical rehearsal for next fall’s federal campaign.

For the NDP, this Alberta election won’t be the national project the last one was. In 2015, heavyweights from the Manitoba government and the Layton and Thomas Mulcair camps flew in for a training run. This time, federal leader Jagmeet Singh’s camp is threadbare, while the only other New Democrat government is John Horgan’s in Victoria, which Notley banned her team from helping during B.C.’s last campaign due to the Horgan NDP’s anti-pipeline stance. Trudeau’s Liberals would love to retain Notley as a provincial ally, but as much as Kenney is treating Trudeau like a campaign punching bag (an old Alberta pastime), he would be doing Notley no favours by punching back. For an Alberta New Democrat these days, getting help from the federal Liberals is about as politically appealing as buddying up to the B.C. NDP—like choosing between drinking bleach and ammonia.

Notley’s team will fight on undeterred against the mightiest archconservative foe they’ve had in Alberta in ages. Warnings about dire spending cuts, privatization and tax cuts for the wealthy are a key part of the NDP’s defence against Kenney—all classic NDP positions from their opposition days. “We run the risk of rerunning the worst of the Klein years,” says Gil McGowan, long-time head of the Alberta Federation of Labour. (Public-sector and private unions remain the core of Alberta NDP’s base; a former AFL executive authored the party’s 2015 platform.)

RELATED: All the green, leafy, pun-filled names of the pot stores coming to Alberta

New Democrats also assert that Albertans are more progressive than the conservative stereotype suggests. Between their win and past PC victories over Wildrose, they note, voters have repeatedly chosen the party that pledged to safeguard the public sector over one vowing to cut it. Notley’s party says it can balance the budget by 2023; UCP by 2024. Her backers also argue, accurately, that the economy has been recovering, and that the NDP has restrained program spending growth better than past Tory governments. Still, thanks to continuing oil-sector sluggishness, unemployment levels remain ugly while stagnant government revenue has kept deficits high. And party insiders concede that if the election is about the carbon tax, they’ll almost certainly lose.

Fearing they’re outflanked on the economy, Notley’s side has relentlessly attacked Kenney, a former immigration minister, as an extremist on social issues, highlighting would-be candidates and party members with records of racist or homophobic comments—along with some things Kenney himself has uttered. A similar ploy worked to repel the Wildrose Party in 2012, preserving the PC dynasty. But by most indications, Kenney has a long way to fall before he risks losing. Prentice, days before losing as premier in 2015, declared that Alberta “is not an NDP province.” Kenney and his Conservatives are confident Prentice had a point, one brief historical blip notwithstanding.