As it tables another red-ink budget, the Notley government conjures a diabolical alternative for Albertans to imagine 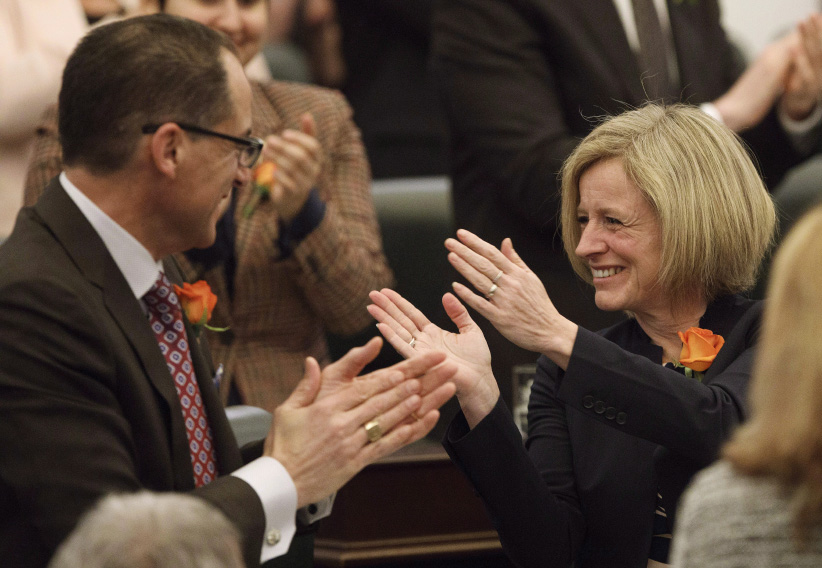 Ceci and Notley in the legislature earlier this month (CP)

For budget speechwriters, a common ploy is to begin and end the finance minister’s address with a specific character—a compelling individual with a captivating personal story, whose needs and challenges perfectly encapsulate what the budget is trying to achieve. For a government investing in health care and senior’s care, it might be Deborah, the sandwich-generation single mom whose son has a rare disease and whose mother needs home-care service. For the belt-tightening minister, there’s oldtimer Dwight at the small-town coffee shop, who worries about the debt burden his grandchildren will pay. For a province that wishes to tout a new skills program: Mo the plumber, from Syria.

Alberta now has the perfect individual to help frame the Rachel Notley government’s vision and fiscal narrative. His name is Straw Man.

Straw Man wants to write budgets with machetes, with “deep cuts to public services,” Finance Minister Joe Ceci says near the start of his address. Straw Man wants to give grandparents second-class health care. Straw Man will “cram as many kids as possible into a classroom,” Ceci says near his monologue’s end. Straw Man gives tax cuts to his “corporate friends,” he added in his news conference. Straw Man is not named thusly in the speech. The opposition Tories and Wildrose aren’t named in this 2017 budget speech either—and nor is Jason Kenney, the man who will become Tory leader Saturday and try to fuse two parties into one conservative monolith. But Straw Man is clearly a composite character.

Alberta’s budget is designed to knock down this villainous figure’s sinister plans. It’s a fairly modest spending plan of lowered public school fees, hospital projects and a slow, optimistic climb to balanced budget early next decade. The plan, to the Notley cabinet’s credit, lacks wildly ambitious new programs, and through some restraint measures allows operations spending to grow by 2.2 per cent. That’s the slowest rate since the days when the premier was Ralph Klein (the Straw Man avatar of bygone NDP rhetoric) during the cuts of the 1990s and after the post-9/11 crash. This year’s budget does not let the premier’s right-leaning foes depict her as a wild-eyed socialist—though both partisan sides like to play with straw—but the plan does place the long-term and possibly even the short-term future of Alberta’s public-sector system atop a dangerously flimsy foundation.

The province may finally be crawling out of its deepest recession since the dreadful 1980s, but it’s a slow crawl, and years will pass before the economy makes up the ground it lost. The province’s oil and natural gas revenue is projected to shoot up by 54 per cent to the highest level in three years, but those three years combined will be equal to what a good year used to be for Alberta’s coffers.

The deficit will be $10.3 billion, which is barely lower than last year’s record mark. The province stakes most of its future balanced-budget hopes on comfortably higher oil prices than might be realistic: $55 US per barrel this year when they’re now below $50, and a rosy-seeming $68 in two years—for every dollar they’re off, add $310 million to the deficit—and the timely completion of oil pipelines which could be held up by various challenges and resistance. The accumulated debt will soar to $71.1 billion in two years, compared with the $20-billion debt when the NDP took in 2015, and approaching triple the size of liability that Klein inherited a quarter-century ago, when he branded the situation a grave crisis demanding revolutionary action.

(There’s a charming chart in the budget book that shows Alberta with the lowest provincial debt-to-GDP ratio, at six per cent. The fine print shows these are 2015-2016 figures. On that same page one can find the real 2017 ratio, 13.8 per cent, set to grow to 19.5 per cent by 2019, still lower than most provinces but ahead of British Columbia and Saskatchewan.)

Notley and Ceci see no real crisis, despite warnings from bond-rating agencies who could again slash Alberta’s credit rating, already below its formerly sterling AAA. To the NDP, the crisis is whatever the opposition parties wish to unleash. But here’s the problem: the last time province was approaching fiscal basket-case territory, when Klein took over in 1992, even his Liberal opponents were pledging austerity to restore some alignment to the money Alberta spent and the money Alberta took in. The Notley government has already done plenty to increase revenues, including corporate tax hikes, bigger rates for high-income earners and a much-maligned new carbon tax. Any further taxes would solidify the political doom that polls suggest they’ll face in the 2019 election. But on spending, they’re unwilling to go farther than they have so far, with measures to freeze civil service managers’ pay, target a few Crown agency executive packages and find ill-defined savings worth 0.3 per cent of the current budget.

Contrast this with Newfoundland and Labrador, where the Liberals responded last year to financial shambles with much higher taxes and fees, and Saskatchewan, where Premier Brad Wall wants to scrub a deficit by demanding a 3.5-per-cent cut to public sector compensation, through lower salaries or unpaid days off being dubbed “Wallidays.”

Ceci hopes Albertans like his plan to maintain services and lower school costs, but isn’t sure how voters will receive a future $71.1-billion debt after the good, old Tory-ruled days of high oil prices and debt freedom. “I just want to win this press conference actually; so I’m focused on that,” joked to reporters before his budget speech.

Whatever white knight of the right faces off against Notley in two years (Kenney? Wildrose Leader Brian Jean?) he or she will undoubtedly campaign on restoring fiscal sanity, fending off the straw-man claims that they will ravage public health and education. But the worse the situation they inherit should they win, the more the budgetary beast rages untamed by the current government, the tougher the fiscal conservatives will eventually have to be.