It’s a scientific love story with a happy ending.

Paleontologist Caleb Brown with the Royal Tyrrell Museum in Drumheller, Alta. has authored a paper about the discovery of a new species of dinosaur.

The last line of the paper reads: “Lorna, will you marry me?” 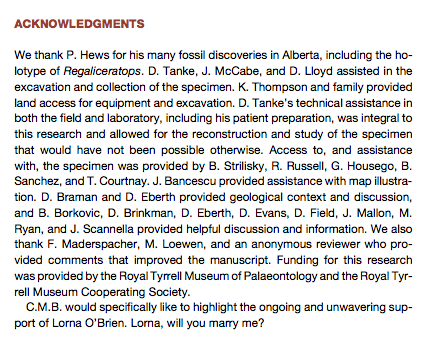 Brown’s proposal, included in the acknowledgments for ‘A New Horned Dinosaur Reveals Convergent Evolution in Cranial Ornamentation in Ceratopsidae.’

It’s a first for the scientific journal Current Biology.

Brown says his girlfriend doesn’t want people to make a big deal about how he popped the question — but she did say yes.