With carbon taxes and phase-outs, the game in Alberta has totally changed. What will it mean for Albertans? 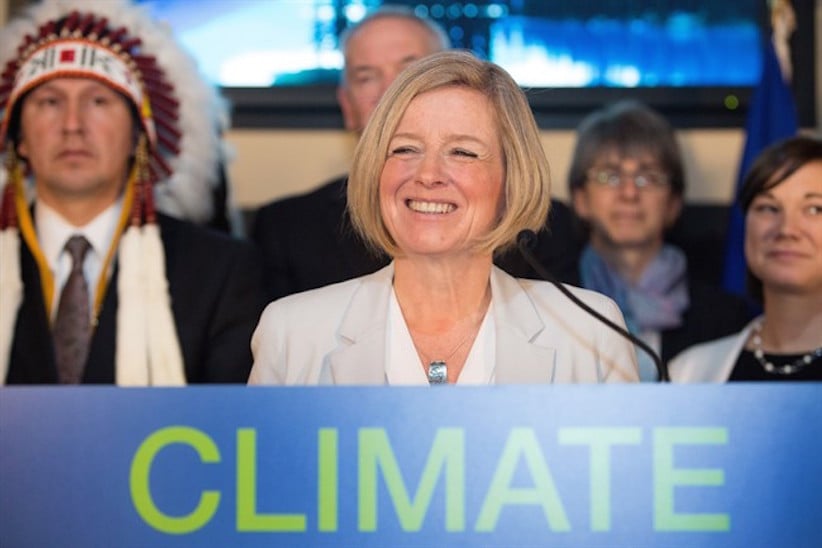 Premier Rachel Notley unveils Alberta’s climate strategy in Edmonton, Alberta, on Sunday, November 22, 2015. The new plan will include carbon tax and a cap on oilsands emissions among other strategies. THE CANADIAN PRESS/Amber Bracken

It was one of those days where folks at podiums use the cliché “game-changer” and it sounds like an understatement. When an oilsands CEO excitedly draws a journalist’s attention to a tweet by Al Gore—yes, those tar-like sands and that Gore guy—it almost feels like more than the game has changed. Team rosters got shuffled after a referee’s whistle, the artificial turf shifted abruptly to switchgrass, the chemical composition of the ball altered and the arena lights now blink off when the score gets high enough.

In one Sunday announcement, Alberta’s NDP government has substantially reorganized its carbon economy—a.k.a. a whole lot of its economy. The impact will be widespread, and our understanding of it will unfold and adapt in the days, weeks, years and decades to come.

If this seems hyperbolic, my apologies. But in Alberta, memories of massive policy shifts will go immediately to the 2007 Alberta resource royalty review, a sizeable earthquake for oil and gas producers. Premier Rachel Notley’s “climate leadership plan” makes that Tory-era reform seem puny, and will likely also dwarf the broad effect of the further royalty review and changes the NDP will unfurl in coming weeks.

Notley and Environment Minister Shannon Phillips dropped nothing less than a policy cluster-bomb of mandated targets, rules and often the mere hint at mechanisms and subsidy packages to enact it all. Alberta will follow British Columbia in introducing a cross-economy carbon tax, $20 per tonne in 2017 and $30 the following year—rebate and offset programs to come. The province will mimic Ontario and mandate the end to coal power by 2030—compensation and negotiated phase-outs to come. Methane emissions from venting, flaring and leaking, will have to be cut nearly in half in a decade—a goal that drillers and others will struggle now to meet in near-lockstep with the Obama administration’s approach on the greenhouse gas that’s more intense than carbon.

Lastly, there’s the oilsands policy, designed to get the biggest nods and high-fives out of foreign partners and environmentalists: a hard cap on emissions from that sector, 100 megatonnes. When Notley was asked about Oil Change International’s tweet that this means “no new tar sands growth,” the premier furrowed her brow and said no. Furrowing and shaking their heads along with her were four oilsands executives invited to share the announcement, from Suncor, Shell, Cenovus and Canadian Natural Resources Ltd. Murray Edwards, the CNRL chairman few watchers expected to appear at such an event, was gushing in his congratulations about the collaboration between industry, the province and green advocacy groups: “This plan recognizes the need for balance between the environment and the economy.” The cap was set at 100 megatonnes, with more room for bitumen upgrading; Alberta’s oilsands currently produce 70. So there’s room to expand the traditionally vilified resource for years to come, and much more if they make good on pledges to slash the per-barrel emission rates. CNRL and counterparts get room to grow, and the climate change panel report by University of Alberta economist Andrew Leach predicts that in most cases, the designed changes won’t cost more than $1 per barrel for most operators. 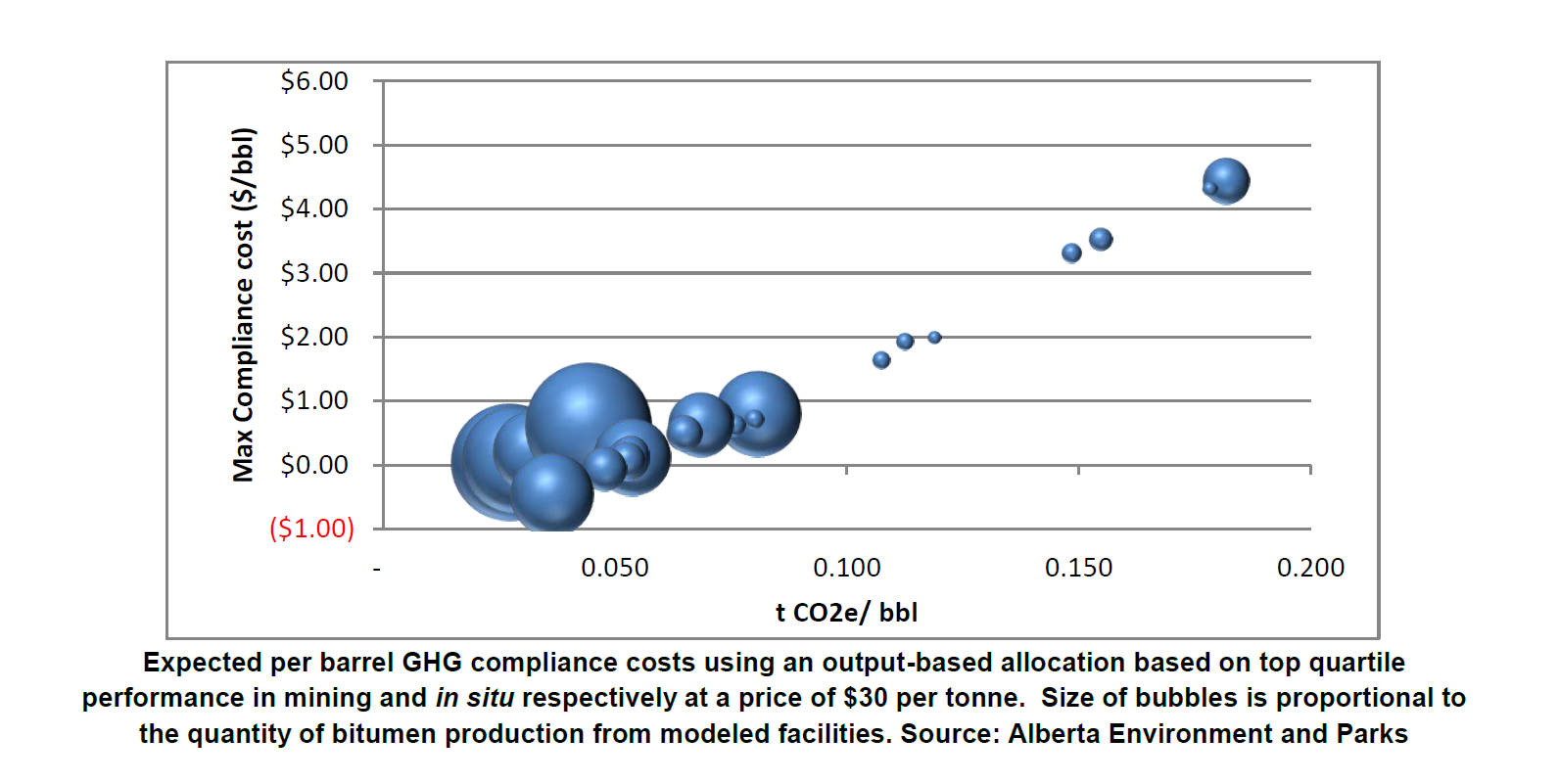 But to the companies, and to the government, much rides on how many heads turn among those who castigate Alberta’s big-money export as “dirty oil” — if the rhetoric and action are enough to make the next pipeline plans actually go through, then the plan could pay for itself. The sooner Alberta can completely bury the days of corporate science denialism and Ralph Klein’s jokes about dinosaur farts, the better.

For consumers, the carbon tax will add nearly seven cents per gasoline litre by 2018, shaving off most the current price advantage Alberta has compared to provinces with sales taxes. Overall costs for heating, power and fuel are targeted to add $470 to the average household bills, though Notley pledges some kind of rebate program for the lower 60 per cent of Alberta income earners. The province is adopting a cutely novel take on “revenue neutral,” though it’s not cutting income or corporate taxes apace like the B.C. government did. In Notley-ese, that means the money taxed in Alberta gets reinvested or rebated in Alberta. That’s like saying provincial income tax is revenue neutral because all of it goes to health care and schools and all else the government does. Even before the announcement, the Wildrose party had recycled the federal Conservatives’ “tax on everything” battle cry against Stephane Dion’s carbon tax plan. Small businesses, rural groups and many others will likely join this chorus.

Tellingly, there weren’t any electrical-generator CEOs invited to the NDP’s big day. With a scheduled phaseout brought on in part by Harper-era regulations, coal generation was already slated to drop significantly in Alberta by 2030, to near 10 per cent of the power mix from around half today. This plan shuts the door more firmly and quickly. TransAlta, one of the companies building new-generation coal plants, said it looks forward to negotiations and the government’s noises about not “stranding capital.” That sector’s happiness will depend on how much compensation Alberta ships its way, and how easily they can become players in the province’s hoped-for wind and solar future—one that somehow won’t cause the same price shocks they did in Ontario, even though the western province is far more reliant on the black rocks.

The exact emissions reduction targets are the blurriest of goals from Sunday’s big bang: the province’s carbon output should be cut from the 320 megatonnes of business-as-usual projects to somewhere in the neighbourhood of 270 megatonnes, though that’s only based on Leach’s panel report, not based on reforms in Alberta’s policy, which diverges in many ways. That’s not even below 2013 levels, let alone 2005, so would require other provinces to cut even more deeply so Canada can meet even the Stephen Harper-era goals. Journalists quizzed the premier on the prospect that this province-rocking plan could be deemed inadequate by her brothers and sisters in Confederation.

That sell job for Notley begins in earnest Monday, at the premier’s gathering with Prime Minister Justin Trudeau. Alberta’s plans were six months in the making, but officials crammed to launch their ambitious strategy one day before. While Notley jets to Ottawa and then Paris to show off the plan, Albertans at home will be trying the grasp the sheer magnitude of ways her new government’s ambition will reshape this province.

An earlier version of this article incorrectly put the forecast at 250 megatonnes. This revision clarifies the source of that projection.