Alberta premier says return to Fort McMurray will be delayed for up to 2,000

After expert analysis, three neighbourhoods were found not safe to be reoccupied by Fort McMurray evacuees until as late as September 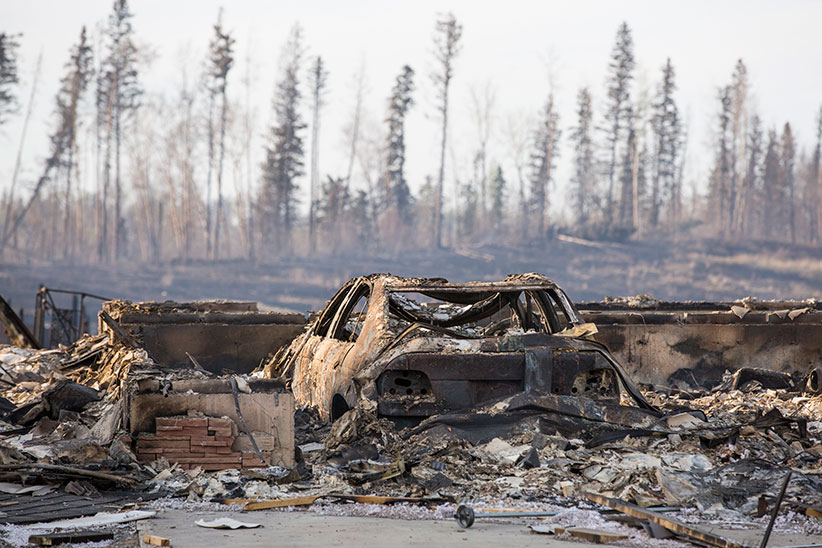 Homes are destroyed in the neighbourhood of Timberlea in Fort McMurray from wildfires that took over 1800 structures. Friday, May 6, 2016. (Photograph by Chris Bolin)

EDMONTON – Alberta Premier Rachel Notley says up to 2,000 evacuees expecting to move back to their homes in fire-damaged Fort McMurray this week will not be able to do so until possibly September.

She says more than 500 homes and about a dozen apartment complexes that escaped a wildfire earlier this month in three otherwise heavily damaged neighbourhoods are not safe to be lived in yet.

She says that conclusion was reached with health experts following tests on air, soil, ash and water.

“Unfortunately, I have to report today that the outcome of these tests indicates that undamaged homes in certain neighbourhoods are not immediately safe for reoccupation,” Notley said Monday.

“More than 500 homes that were not damaged by fire have been determined to be unsafe for habitation at this time.”

The premier says it’s not safe to return until toxic ash and debris surrounding the homes have been removed. Residents will need to stay elsewhere until it is safe to go back.

“It means that people who live in those neighbourhoods should not plan to return permanently on June 4 as originally planned.”

Arrangement will be made for people from the affected homes to make a one-time visit.

“While these homes are not safe to live in until further remediation and cleanup of the neighbourhoods is complete, we believe it will be possible to arrange for these residents to temporarily return to inspect their residences and retrieve their belongings.”

The Red Cross also announced Monday that it is releasing another $20 million from donations to everyone able to move back safely at this time.

Returnees are to receive $300 for the first person in a household and $50 for each additional person. The electronic transfer of cash is intended to help with immediate expenses such as buying cleaning supplies and replacing rotten food.

More than $100 million has been donated to the Fort McMurray relief effort. Tuesday is the last day for individual donations to be matched by the federal and Alberta governments.

A provincial state of emergency that has been in effect in the Wood Buffalo municipality since shortly after the fire whipped through the city is to be extended until the end of June to make cleanup and return of residents easier, Notley said.

The fire is still burning and covers about 5,800 square kilometres, although it is not expected to grow significantly in coming days due to cooler and wetter weather conditions.

Maclean’s has answered all your questions about the Fort McMurray fire in this FAQ.