People have been opening their homes, cupboards and wallets for fire evacuees from Fort McMurray 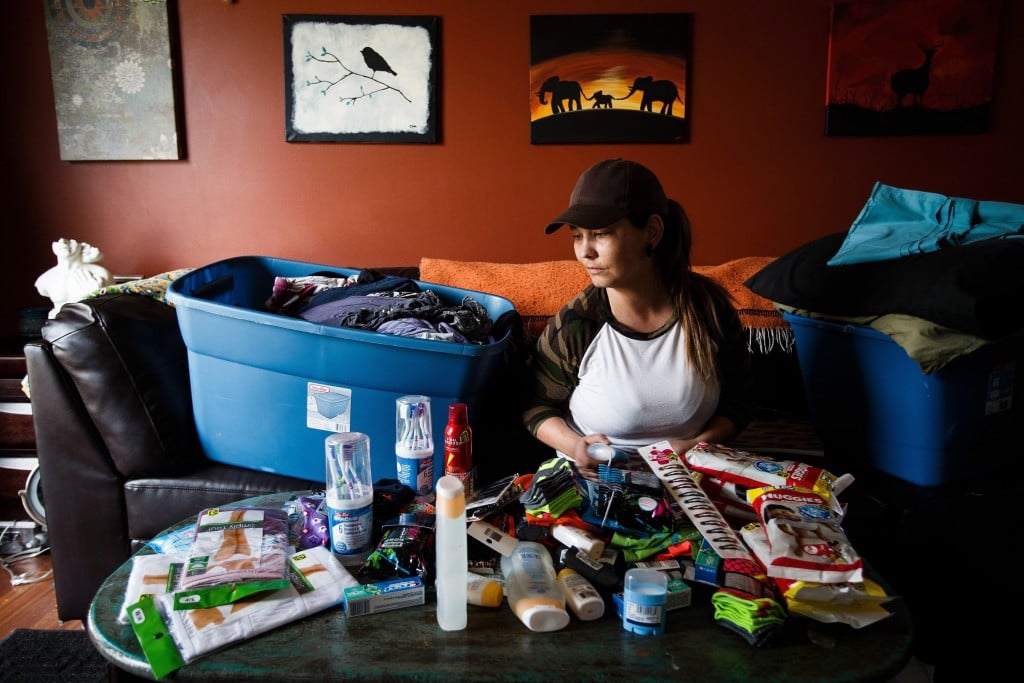 Char Kaye packs care packages for evacuees of the wildfires in and around Fort McMurray from her home in Spruce Grove Alta, on Wednesday, May 4, 2016. THE CANADIAN PRESS/Codie McLachlan

EDMONTON – When Char Kaye saw fire ravaging Fort McMurray on the news – from the safety and comfort of her home near Edmonton, she told herself she had to do something to help.

She bought deodorant and toothbrushes, packed up toys and blankets, then took to social media and offered up her home to strangers.

“The hand that feeds us is the oil industry and I know Fort McMurray plays a gigantic part in the economy,” Kaye said Wednesday from her house in Spruce Grove.

“They need everything they can get and watching it literally go up in flames is just devastating.”

People have been opening their homes, cupboards and wallets for fire evacuees from Fort McMurray since the city’s 80,000 residents were told to flee Tuesday.

Social media is rife with offers of free meals, tire repairs, pet food and even graduation gowns for high school students who have lost theirs in the fire.

Some fitness centres are letting evacuees use their showers. U-Haul has offered of a month of storage and boxes. Labatt Breweries says it will donate 69,000 cans of drinking water, and has 131,000 more at the ready if needed.

The Red Cross says it’s ramping up its call centre to deal with a flood of monetary donations, which includes money from companies such as Shaw Communications, Canadian National and Manulife.

On Wednesday, the government of Alberta announced it will match donations to the Red Cross in support of the people of Fort McMurray, as well as provide $2 million in seed money to kickstart operations.

“We know Albertans are stepping up to help the people of Fort McMurray; that’s what Albertans do when people are in need,” said Premier Rachel Notley.

“The most effective thing people can do right now is make donations to the Red Cross, knowing our government will match those funds.”

On Tuesday night, Fabian opened her home in Fort MacKay, north of Fort McMurray, to about 20 relatives and their friends _ and their 11 dogs and two cats. They slept in spare bedrooms and on blow-up mattresses on the floor.

She lent one of her vehicles Wednesday to a cousin, and about half her guests moved on to other homes.

Fabian says she’s glad to help and everyone has been thankful.

“I’m just happy that everyone’s safe,” she says. “They have a roof over their heads and they have food.”

Thousands are staying in evacuation centres and northern work camps. But many people have listed their homes and spare rooms on social media, along with their outdoor space for evacuees who want to set up camp.

Some facilities, including the Green Dome mosque in Calgary, have also opened the doors and offered shelter for however long they might need.

“We’ve heard so many stories of the ways that Albertans are helping Albertans,” said Notley.

“Our province is strong and we will get through this.”

Mike Ryan and several friends from the Edmonton area loaded their pickups with jerry cans and larger slip tanks full of fuel to help evacuees who ran out and became stranded on the side of Highway 63 south of Fort McMurray.

The group is part of a Facebook club of truck enthusiasts called Western Canadian Support Rig, who normally help drivers in need of a boost or tow in exchange for donations for charity. When they heard about the fire, they quickly got on the road.

“We drove all night,” Ryan said, adding his convoy has so far helped dozens of people, including two pregnant women in a car that had run empty.

The company has 180 employees in Fort McMurray, and at least 14 of them have lost their homes. Baltgailis said it wanted to help, along with everyone else.

“It shows that we’re Canadians and we’re a community. And in times of these events and disasters, we can all team together.”