Don Getty: Statesman and star athlete eulogized as No. 1 Dad 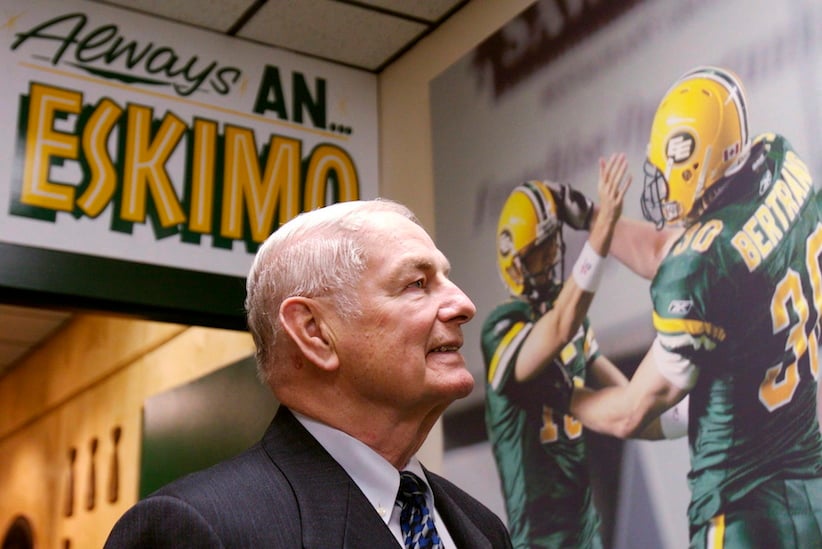 EDMONTON — Former Alberta premier Don Getty was remembered Saturday as a family man, a statesmen, and a star CFL quarterback with a rifle arm who once drove a carnival barker to distraction.

It was at the Klondike Days fairground, Derek Getty recounted to 600 assembled mourners at the All Saints Anglican Cathedral.

At one booth, Getty was invited to throw a football.

Throw the football through a tire and win a stuffed teddy bear.

“He gave me a bear, and my brothers bears,” said Derek. “And as kids were walking by he gives them bears, too.”

It was laughter through tears as Getty’s children and grandchildren remembered not the politician and Grey Cup winning Edmonton Eskimos quarterback but the father and grandfather who drilled into them an ethos of being tough but respectful and never forgetting the primacy of family.

They told stories of going duck hunting with their dad. Don and wife, Margaret, would never miss football or basketball games.

When Don would get home at the end of the day, even if he was dog tired, he would change out of his suit and tie and toss “bullet pass” football throws to the kids in the neighbourhood.

He and Margaret never forgot a birthday, calling up kids on the special day to warble “Happy Birthday.”

His son Darin recalled numerous family outings, trips to Jasper and the Okanagan, golfing, and always Sunday family dinners, which he said “was a non-negotiable deal with my dad.”

Getty’s former political aide and friend, Patrick Delaney, recalled a man who built respectful relationships with other premiers, was a skilled negotiator and always kept his head in a crisis.

Getty, he noted, created Family Day as a holiday, took steps to try and bring reform to the Senate, set aside land and granted self-government to the Metis, and fought for Canadian unity through the Meech Lake and Charlottetown accords.

Delaney said he has lost a dear friend and Canada has lost one of its greatest and most respected champions.

“For me in my life and I know for you as well, we shall not see his like again,” said Delaney.

At the front of the church was Getty’s casket, draped in the deep blue flag with the provincial crest.

At the cathedral were many of Getty’s former political colleagues. Former premiers Dave Hancock and Ed Stelmach were on hand, as was current premier Rachel Notley.

Notley recalled to the mourners how Getty worked with her father in the legislature when Grant Notley was leader of the opposition NDP.

Grant Notley was killed in a plane crash in 1984.

“When my father passed away Don and Margaret reached out to us,” said Notley.

“The compassion they shared with my family in that difficult time has stayed with me.

“They knew that family and kindness should always transcend politics.”

Getty died a week ago, on Feb. 26, at age 82 of heart failure. He had been in declining health for a number of years.

He was premier from 1985 to 1992 following successful careers in football and as an oil businessman.

He took the reins as Alberta’s economy hit the ditch when oil prices plunged.

Delaney said it was a difficult period, but he said Getty prided himself on never shrinking from a challenge.

He recalled Getty’s final words to his caucus when he left the premier’s job in 1992.

“’You must take on the challenges and the risks.’

“’Building is not for the timid or for those seeking to always be safe.”’