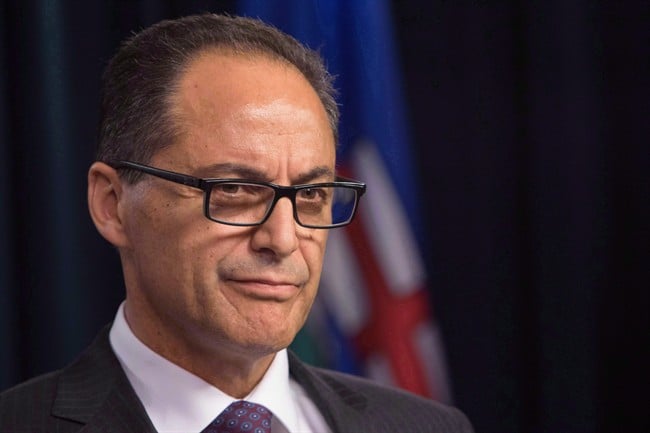 Alberta Finance Minister Joe Ceci releases the 2015-16 year-end financial results in Edmonton on Wednesday, June 29, 2016. Alberta’s fiscal outlook for this year is a tiny bit better, but still billions of dollars in the red. Ceci says the estimated deficit for this year has been revised to $10.8 billion, slightly lower than the $10.9 billion forecast three months ago. (Amber Bracken/CP)

EDMONTON – Alberta’s fiscal outlook for this year is a tiny bit better, but still billions of dollars in the red.

Finance Minister Joe Ceci says the estimated deficit for this year has been revised to $10.8 billion, slightly lower than the $10.9 billion forecast three months ago.

“(It’s) a small but measurable improvement,” Ceci told reporters at the legislature Monday as he gave the second-quarter update for the 2016-17 budget.

Ceci said there are signs that an economy bludgeoned by low and oil gas prices is stabilizing.

Some 25,000 new jobs have been created in the last three months, most in the oil and gas sector, while the housing market stabilizes and the population grows, he said.

Real GDP, which is expected to fall by 2.8 per cent this year due to the effects of last spring’s vast Fort McMurray wildfire, is expected to rebound and grow by 2.3 per cent next year, Ceci said.

The fire, which displaced thousands of residents and forced a temporary shutdown of oilsands operations, was blamed in the last update for increasing the projected budget deficit by $500 million.

Alberta remains mired in an economic downturn due to the prolonged slump in oil and gas prices. Thousands of jobs have been lost and the unemployment rate in Calgary is above 10 per cent.

Government expenses this year are forecast to reach $52.8 billion, which is about $1.7 billion higher than expected when the budget was introduced in the spring.

Total revenue is pegged at $42.7 billion, which is $1.3 billion higher than first estimated.

Corporate income tax revenue, however, now is forecast at $3.4 billion, a decrease of $877 million from the budget. Borrowing for capital projects is $4.7 billion and the province is borrowing another $6.4 billion for operating expenses.

By the end of the fiscal year, Alberta’s debt is expected to hit $31.2 billion, with more than $1 billion spent on debt-servicing costs.

The government’s plan is to balance the books by 2024.

Premier Rachel Notley has decided not to slash public-sector jobs or capital spending while it rides out low energy prices.

Critics, however, say the looming debtload — projected to hit $58 billion by the end of the decade — will punish future generations with debilitating interest payments.

“Eventually governments run out of spending other people’s money and have to pay back the banks.”

Interim Progressive Conservative Leader Ric McIver said the government keeps promising to bring in a plan to pay down the deficit, but has shown no progress to date.

“The new answers that they promised Albertans? They don’t have any,” said McIver.

“The government is like spoiled kids at a house party. They know they don’t have to clean up the mess, so they don’t care how big the mess is.”

McIver said the government has made a difficult situation much worse by raising corporate taxes and bringing in a broad-based carbon tax.