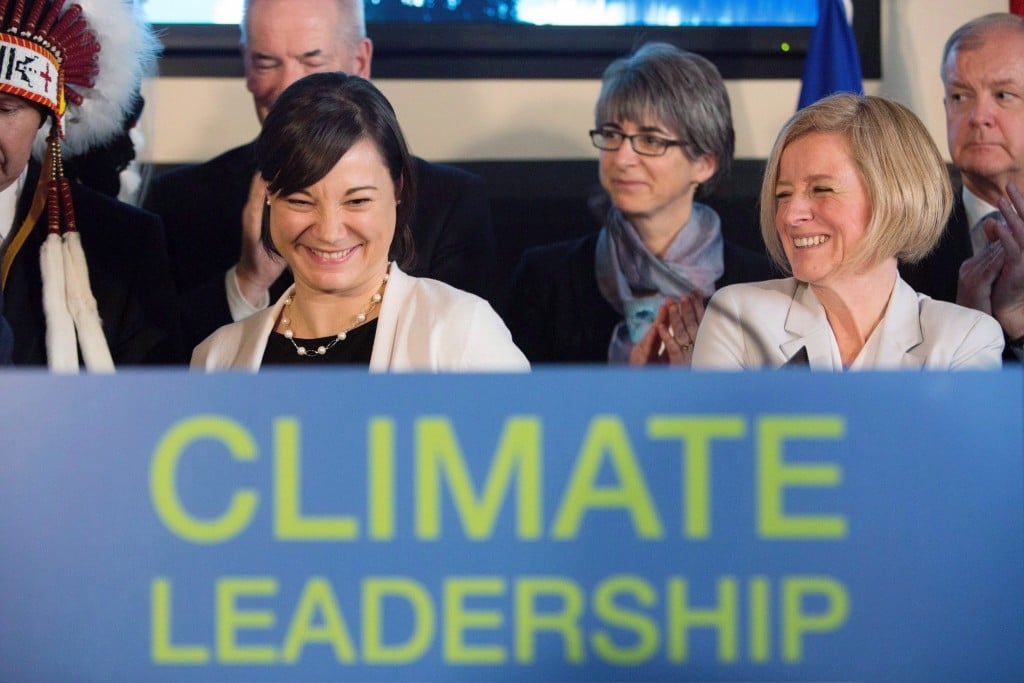 Premier Rachel Notley, right, and Environment and Parks Minister Shannon Phillips look on after unveiling Alberta’s climate strategy in Edmonton, Alberta, on Sunday, November 22, 2015.Climate isn’t all that’s changing in Alberta.The province’s NDP government has arguably made bigger moves on global warming in six months than the previous Conservatives made in a generation. THE CANADIAN PRESS/Amber Bracken

The province’s NDP government has arguably made bigger moves on global warming in six months than the previous Conservatives made in a generation. And the changes aren’t going to stop.

The details of the government’s new climate change policy — carbon-price rebates and green infrastructure investments, for starters — will be at least partly fleshed out in the coming months as the government readies its spring budget. But that, says Environment Minister Shannon Phillips, is just the beginning.

“We are entering a world that is going to be constrained with respect to (carbon),” the minister said recently in an interview with The Canadian Press.

“Alberta must be carbon-competitive with respect to our energy. It is also not something that this government created. It is a fact. Just as the science of climate change is a fact.

“We have a low price of oil, a scientific consensus on the way the global economy is going. Within that, one must make careful and deliberate decisions on how we move forward. The way to do that is not to engage in angry navel-gazing.”

Phillips is clear that Premier Rachel Notley understands that governments must not only lead, they must get people to follow. That became especially clear after poor communication sparked noisy protests against the government’s farm safety legislation.

Phillips uses the word “conversation” — with Albertans, with communities, with industry — again and again.

But make no mistake. She is working toward a different province than the one in which she grew up.

“Climate policy can be — and is — a job creator and community developer and a way that communities can really take ownership over how they develop.”

The boom-and-bust Alberta of go-go oil and gas investment followed by shuddering halt has got to end, she said.

“And that’s what relying on one commodity to one market at one price delivers to us. It delivers great wealth when that one commodity is high, but this has been an object lesson, the last six to eight months, in the need to diversify the economy.”

Phillips isn’t sure that Albertans need to be taught that lesson.

“Albertans know (it) very well. When you talk about the need to diversify, everyone nods their heads.”

Voters not only elected a progressive government last spring, suggested Phillips. They did it in the previous election when the Redford Tories won on a platform that attracted teachers, health-care workers, parents of school-age children and university students.

“Alberta is much more progressive than most people give it credit for. We saw that even with the election of the Redford government, and you saw it again on May 5. Albertans did that twice in a row.

“Albertans are ready for a strong, diversified economy in which we take our environmental responsibilities seriously, in which we are ensuring that we are delivering on our responsibility (for) good health and good air quality.”

That new economy will have some new faces in it, too.

“What we don’t want to do is replicate the social exclusions and the economic inequalities of the old days. What we want to do is ensure that all Albertans have access to growth and prosperity from these initiatives.”

Despite the farm safety protests, Phillips downplays the likelihood of a backlash. But if there is, bring it on.

“I’m a New Democrat in Alberta,” she said. “I’m not really afraid of much.”