Alberta’s support of the national climate plan is nice, but hardly necessary

Opinion: As a matter of constitutional jurisdiction, the federal government does not need Alberta’s buy-in to legally enact and implement its national climate change policy 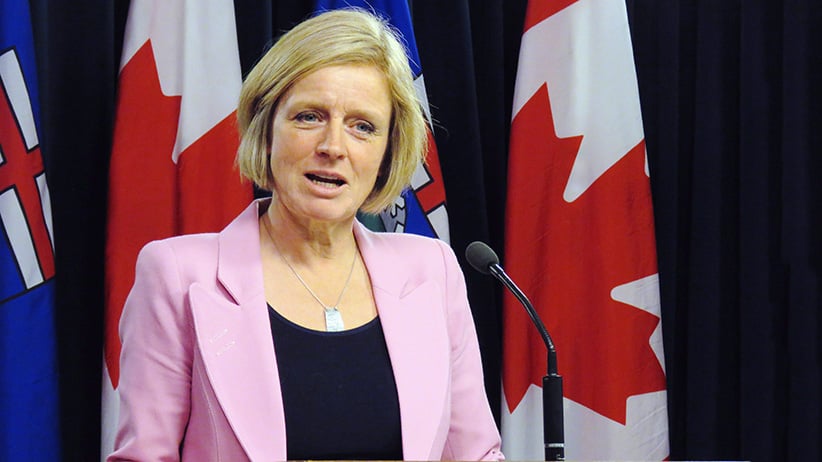 Alberta Premier Rachel Notley announces that she is suspending the province’s ban on B.C. wine at the legislature in Edmonton, on Thursday, February 22, 2018. THE CANADIAN PRESS/Dean Bennett

Jason MacLean is an assistant professor at the University of Saskatchewan College of Law.

The test of a first-rate intelligence, F. Scott Fitzgerald once said, is the ability to hold two opposed ideas in mind at the same time and still retain the ability to function. By that test, University of Alberta economist Andrew Leach is very clever indeed. How else could he argue, as he did recently in a Maclean’s opinion piece, that blocking the Trans Mountain pipeline expansion—and along with it, increased GHG emissions from Alberta’s oil sands—would jeopardize Canada’s climate change plan and make it impossible to meet our emissions reduction target under the UN Paris Agreement?

Lesser minds might call that kind of thinking paradoxical. Hypocritical, even, in the case of Premier Notley.

Let’s take Professor’s Leach’s paradox first. How can it be that blocking the Trans Mountain pipeline expansion—which, if built, will almost assuredly increase the GHG emissions from Alberta’s oil sands—would undermine Canada’s climate change plan? Leach’s argument, advanced in support of Prime Minister Trudeau’s criticism of British Columbia’s proposed pipeline safety measures, is that the federal government’s climate plan requires Alberta’s buy-in, and the price of that buy-in is a pipeline to tidewater. “If the federation fails Alberta on federally regulated pipelines,” Leach argues, “it should not expect Alberta to continue as a leading partner in our efforts on climate change.”

Leach’s argument can only be sustained, however, if at least one of the following two tacit—and highly tenuous—assumptions turns out to be true.

Leach appears to assume that the federal government lacks the constitutional jurisdiction to impose its pan-Canadian carbon price on unwilling provinces. This, incidentally, must come as unwelcome news to the federal government itself, which has consistently and, with good reason, confidently asserted that it can legally impose a carbon price on any recalcitrant province.

The Federal Court of Appeal recently affirmed this approach to environmental regulation in a case arising out of Alberta called Syncrude Canada Ltd. v Canada (Attorney General). Syncrude, a crude oil producer operating in Alberta, challenged the constitutional validity of a provision of the federal Renewable Fuels Regulations requiring that all diesel fuel produced, imported, or sold in Canada contain at least two per cent renewable fuel. Syncrude tried to characterize the renewable fuels regulation as an economic measure aimed at the establishment of a local market for renewable fuels, or a measure improperly directed at non-renewable natural resources. Either way, Syncrude argued, the federal renewable fuels regulation improperly trenched on matters falling under exclusive provincial jurisdiction.

The Federal Court of Appeal unanimously rejected Syncrude’s constitutional challenge. Following Supreme Court of Canada precedents, the Federal Court of Appeal concluded that “[p]rotection of the environment is, unequivocally, a legitimate use of the criminal law power.” The Court proceeded to observe that “it is uncontroverted that GHGs are harmful to both health and the environment and as such, constitute an evil that justifies the exercise of the criminal law power.” Even if such a law intrudes into provincial jurisdiction over natural resources, the Court added, it will nevertheless pass constitutional muster so long as it is a law of general application.

Now, some constitutional law purists (not to mention a number of criminal law professors) maintain that the criminal law power should not be used for matters of regulation as opposed to outright prohibitions based on grounds of morality. No matter, federal jurisdiction over the environment—including the jurisdiction to impose a national price on carbon—may also be based on its taxation power, or on its residual jurisdiction over matters of “national concern” under the Peace, Order, and Good Governance (POGG) power.

The legal bottom line: As a matter of constitutional jurisdiction, the federal government does not need Alberta’s buy-in to legally enact and implement its national climate change policy. Nor does it need Saskatchewan’s or Manitoba’s; in fact, Manitoba concluded as much after spending $750,000 on a legal opinion on the matter.

To be absolutely fair to Professor Leach, he doesn’t explicitly argue that Canada’s climate plan constitutionally requires Alberta’s buy-in. But if that’s not his assumption, then he must assume that the feds need Alberta’s buy-in as a practical matter of politics.

Be that as it may, his argument still doesn’t hold.

As a matter of political give-and-take, what is the federal government promising Saskatchewan, whose new premier, Scott Moe, is as opposed to a pan-Canadian price on carbon as was his predecessor Mr. Wall?

What will the federal government dangle in front of Manitoba to persuade that province to raise its recently-proposed flat carbon price of $25 per tonne once the federal price rises above that?

What if the Progressive Conservatives win the upcoming election in Ontario (or the one after that) and ultimately keep their campaign promise to repeal the provincial Liberals’ cap-and-trade regime and reject a pan-Canadian carbon price?

Somehow, although how exactly is unclear, Professor Leach appears to believe that if Alberta stays on board, the federal government will be able to fend off political assaults from the other uncooperative provinces.

But even if that were a safe assumption—and there is no evidence to suggest that it is—what if the United Conservative Party takes office in Alberta in 2019? This is hardly idle speculation. New pipeline to tidewater or no, Jason Kenney has vowed to repeal the province’s carbon tax and oil sands emissions cap. What then?

Assuming for the sake of argument that the federal government does not wield a big constitutional stick, it also appears woefully short of political carrots.

Out of an abundance of charity to Professor Leach, and with all due respect to his unimpeachable contributions as Chair of the Alberta Climate Leadership Panel, his argument may well rest on a more nuanced political assumption: that Alberta’s leadership is required to bring the rest of the provinces along. Leach argues that “federal climate policy backstops put a stronger foundation under the Alberta plan and, with the Alberta plan in place, there is a credible although still very challenging path for Canada to meet its 2030 target. “Without Alberta’s plan, that credible path disappears.”

The tacit and highly tenuous assumption here appears to be that with Alberta on board as an ambitious climate leader, the rest of the provinces will put aside their own parochial priorities and follow suit. This assumption rests on yet another, still more tenuous one: that uncooperative provinces like Saskatchewan and Manitoba are unwilling to commit to a national carbon price, not because of their own particular political interests and liabilities, but because they remain unconvinced that the national climate plan will actually succeed. If Alberta remains committed, then they will also commit … eventually.

But even if that were the case, and here the evidence suggests the opposite (Saskatchewan, for example, remains unmoved by Alberta’s leadership), the federal government’s ample constitutional power is a far simpler means of solving this collective action problem. Simply—and stringently—price carbon emissions across all sectors of the economy consistent with our obligation under article 4.4 of the UN Paris Agreement to undertake economy-wide absolute emission reductions, and allow the market to react to that unequivocally clear price signal. No need to approve new pipelines that will lock-in increasing emissions for decades.

The political bottom line: If Canada requires Alberta’s buy-in as a matter of politics, it necessarily requires Saskatchewan’s, Manitoba’s, Ontario’s, and the Maritime provinces’ as well. A national climate policy based on this kind of perpetual horse trading is hardly sustainable, or likely to be sufficiently stringent to be worth the effort and expense.

As a matter of general principle, Professor Leach is correct that a national climate change plan will always depend on a functioning federation. But how is that federation to function if, in order to enact laws in the national interest, the federal government allows itself to be extorted by the provinces? The short answer is that it can’t, and that’s why the Constitution sets out a division of powers between the federal and provincial governments.

And yet, as the B.C.-Alberta pipeline spat illustrates, conceiving of those powers as hermetically sealed, watertight compartments is hardly conducive to a functioning federation. When Professor Leach asks us how we can expect Alberta to continue to play ball on climate change mitigation if the federation fails the province on federally-regulated pipelines (astonishingly, as if Albertans don’t have an independent interest in protecting the environment and human health), how can we expect British Columbia to play ball on pipelines if the federation fails the province on oil spill safety on its lands and in its waters?

Perhaps Premier Notley can square that constitutional circle? Though in reality, there is a simple resolution. Alberta’s demand for a new pipeline has nothing to do with climate change mitigation. It’s about the oil industry’s—and perhaps Premier Notley’s—short-term interests, which are plainly contrary to a credible climate change plan. British Columbia’s demand for oil spill safety enhancements, by contrast, are capable of being designed so as not to usurp the federal government’s authority over the approval of interprovincial pipelines. British Columbia is demanding a safer pipeline, not no pipeline at all (forgive me, but that tanker appears to have sailed). Alberta’s demand is unconstitutional because it impairs the core of the federal government’s policy. British Columbia’s demand is constitutionally valid because it is limited to its own territorial environment and economy, and does not trench on the federal government’s authority. The distinction may be subtle, but it is significant, and it is workable.

Faced with such disputes—and Professor Leach is right, the list will be endless absent a constitutionally-entrenched climate framework—it is crucial to understand that jurisdiction over the environment in Canada is shared by the federal and provincial governments. As the Supreme Court of Canada observed in a classic case called Friends of the Oldman River Society v Canada (Minister of Transport), it is practically impossible to entirely disentangle environmental and economic concerns. Federal-provincial cooperation on matters of the environment is thus the preferred approach in our federation. According to the Federal Court’s recent decision in Taseko Mines Ltd v Canada (Environment), “a project of such magnitude as the one considered in the present case [an open-pit gold and copper mine in British Columbia] will likely have impacts in areas of both provincial and federal responsibility.” Cases such as this, the Court explained, illustrate why environmental assessment in Canada is designed to “promote co-operation and co-ordinated action between federal and provincial governments.”

An ideal national climate plan, then, is one that bends just enough to accommodate legitimate provincial interests without breaking.

In fact that may be the best definition of a functioning federation yet. Like a first-rate intelligence, cooperative federalism is the ability to hold two opposed ideas in mind at the same time and still retain the ability to function.