‘The black eye didn’t stop me from playing ball'

In the back of Arleene Noga’s closet hangs a felt jacket from 1954, imprinted with the logo of the All-American Girls Professional Baseball League. Although she pulls it out for a nostalgic look now and then, she never wears it in public. “It takes too long to explain,” she says. “And so many people in Canada don’t think our league was real. They think it was fictitious.”

Playing shortstop and third base for the Fort Wayne Daisies, and later for the Muskegon Lassies, Arleene Johnson, as she was known then, helped carry her teams to the playoffs in all three of the full seasons she played professionally. Her 0.942 fielding percentage in 1947 set a record in the league, which featured more than 600 players between its running years of 1943 and 1954.

FROM THE ARCHIVES: Maclean’s film critic Brian D. Johnson reviews A League of their Own from 1992

At 21, Arleene had to billet with families in Illinois and Michigan, where she trained daily with her teammates. Despite the intensity of doing calisthenics in the rain and playing 112 regular-season games, she felt permanently grateful. Not only was she a woman playing professional sports during a time when baseball gloves only came in men’s sizes, she had also been discovered in faraway Regina, where an American scout had seen her play.

“He took me right off the diamond,” says Arleene. “He asked me immediately if I’d be interested in going south.” The following week, Arleene boarded a train with about a dozen other female players and headed to Chicago for a tryout. “Of course, I had to get permission from my folks,” she says, “because in those days, we all did what our parents told us.”

Arleene’s father gave her the okay. As a wheat farmer in Ogema, Sask., he had played softball with his four daughters and son as they grew up. After the cows were milked, eggs collected and horses groomed, the family and their neighbours would practise on a homemade diamond. A similar field sat beside the local schoolhouse, where Arleene travelled to and from each day by buggy and horse, or by sleigh in the winter. At lunch, kids raced to the diamond to claim first bat. Although they always managed to avoid hitting the teacher and the horses, a friend’s swing once struck Arleene in the face. “He smashed my glasses,” she remembers. “But the black eye didn’t stop me from playing ball.”

At the end of Grade 12, Arleene moved to Regina to work as a secretary. Before she left, her vice-principal urged her to continue playing and connected her with a team in the city. She had only played three games in Regina before the scout arrived. After the first tryout in Chicago, she signed a contract and began playing games across the country, always with a team chaperone and always with a skirt for the bottom of her uniform. “It was more free than wearing heavy slacks. You’ve got to be able to move fast.” 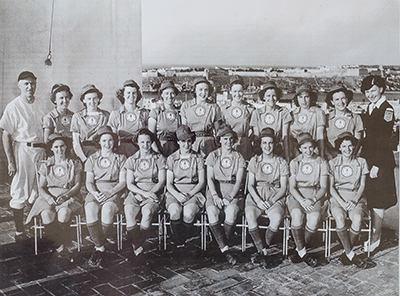 The men’s teams initially snarked—just as depicted in the 1992 movie A League of Their Own. “But when they found that we really could play ball,” says Arleene, “they stopped with the harassing.”

In 1947, Arleene helped her team win the league pennant. However, when she visited home that summer, her father started hinting that she should quit. “He said girls don’t go on forever in ball. He thought it was best that I carry on with a family and job.” After one more season, she ended her professional career. Coaches sent letters trying to change her mind and assured her that her place on the team was reserved.

Working at a telephone company in Regina, she met her husband, Ron Noga, and had two children. She played amateur softball until she was 70, and Ogema has since changed its roadside billboard to announce, “Home of Arleene Johnson.” She isn’t sure how far she could throw a ball today, but she is quite sure she could swing a bat if she ever needed to in self-defence. She now lives in a long-term care home, where she keeps her league pennant pin tucked away like her jacket. She cheers for the Blue Jays. — Meagan Campbell