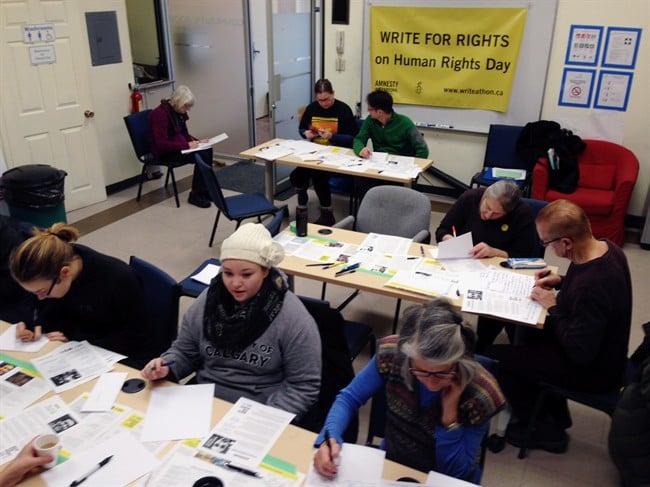 VANCOUVER – An annual Amnesty International human-rights campaign is taking aim at a Canadian project for the first time — the Site C dam.

The $8.8-billion hydroelectric dam project in northeast British Columbia was one of 10 global issues targeted by the Write for Rights campaign on Saturday.

The campaign involves events held across the world where people write letters petitioning leaders for action on human-rights causes.

Letter-writers are demanding Prime Minister Justin Trudeau revoke approvals for the project, which would flood First Nations spiritual, burial and archeological sites and affect hunting and fishing areas in the Peace Valley.

Craig Benjamin of Amnesty International Canada said it’s significant that the project was selected for the campaign along with high-profile causes in the U.S., China and Iran.

“The human rights abuses are real and significant, of both the direct impacts of the dam and the very process itself, that the rights of indigenous peoples could be ignored in such a blatant way,” he said.

He said the Trudeau government wants to be seen on the world stage as a champion of indigenous rights and it must be reminded of its obligations by the international community.

B.C. Premier Christy Clark announced approval of the project in December, 2014, saying Site C will mark a historic milestone that will be felt for a century.

The dam would be the third on the Peace River, flooding an 83-kilometre stretch of valley near Fort St. John.

Construction at the dam site started last summer and the federal government approved permits this year to allow work to begin on diverting water flows.

Amnesty International, an independent human-rights advocacy group, has issued reports calling for a halt to the project.

One report said the approval process violated Canada’s human-rights obligations toward indigenous people on several grounds, including putting B.C.’s plans for the area ahead of First Nations’ preferred use of the land.

The Federal Court of Appeal has yet to rule on a challenge filed by the Prophet River and West Moberly First Nations, who argue the approval of the project infringed their treaty rights.

The letters generated by the campaign — which included events in Mexico, Ukraine, France and England — will be mailed to Ottawa on Saturday. Last year, more than 3.7 million messages were sent to world leaders, Amnesty International said.

Other causes championed by this year’s campaign included calling for U.S. President Barack Obama to pardon whistleblower Edward Snowden and demanding Egyptian authorities drop charges against a photojournalist arrested in 2013.

Don Wright, an activism co-ordinator with Amnesty International Canada, said the letter-writing event at the group’s Vancouver office was busy on Saturday despite stormy weather in the city.

He said Trudeau must uphold the UN Declaration on the Rights of Indigenous Peoples, which requires “free, informed, prior consent” from First Nations except in extreme circumstances.

“We want to let him know that Canadians and in fact people around the world agree with us,” he said. “This clearly goes against Canada’s commitment to indigenous rights and it needs to be brought to a halt.”