An Arab festival, a headless clown and a sword — cue the outrage

A poster for the festival, as well as the festival itself, destroy the cliché that Arab culture is a desert of bloody austerity 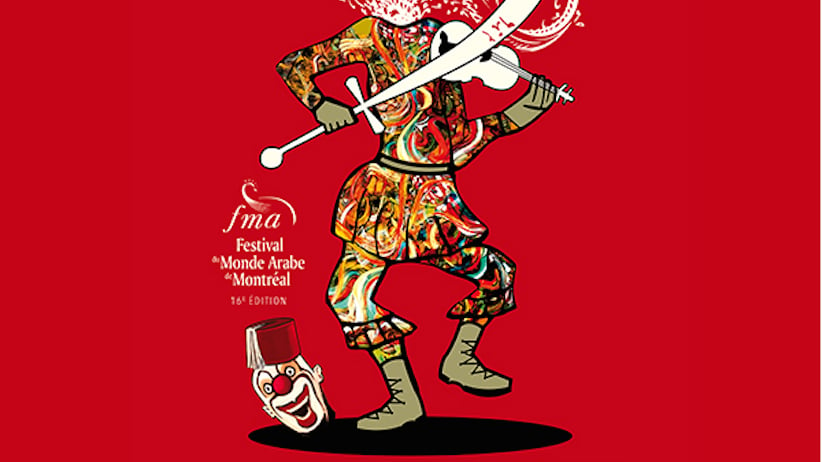 The decapitated minstrel plays violin with a sword as he dances in his own shadow. At his side, by his boots, is his head. He wears a fez and appears to be cackling—to the music, perhaps, or to the outrage he has wrought. A confetti explosion of what looks like blood bursts from the hole that was once his neck.

At first blush, you might think it a questionable cartoon, or a hateful prank from one of the more pungent recesses of the Internet. In fact, this happy, headless fellow is the de facto spokesperson of the 16th annual Festival du Monde Arabe de Montréal—the equivalent of Ste. Cat, the Montreal International Jazz Festival’s souled-out mascot, except with a bigger smile and way more gore.

And more purpose, it seems. Since its unveiling in late October, the poster has solicited exactly the reaction you’d expect—from all the people you’d expect. Festival program director Henda Ben Salah puts them in two categories: Arabs and Quebecers de souche (old-stock Quebecers). The former, she says, are ashamed to be associated with what they say is the most horrendous of clichés, while the latter are angry that Arabs themselves would make light of a barbaric act. As one social-media type, quoted in the festival spiel, put it: “Arab culture is murderous, even when it expresses itself through humour and sarcasm.” 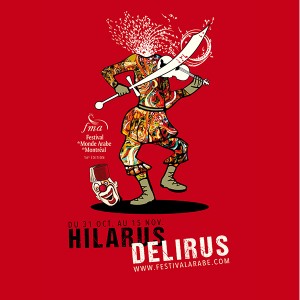 To the critics, I say, off with their heads. And since you’ve made it past that awful joke, let us examine the much better one that is this poster. It came about, Ben Salah told me, after reflecting on the headlines over the past year, dominated as they were by the Charlie Hebdo attacks and the filmed decapitations by the likes of ISIS. “Today, that is what is happening in the Arab world. We can’t make abstraction of it, we have to address it,” Salah says.

The festival team did so by adopting a particularly ballsy theme for this year’s festival. The FMA has never been particularly anodyne; last year’s theme was “Folies Métèques,” which translates roughly to “dirty immigrant follies.” This year’s theme goes further with  “Hilarus Delirus,” an apparent double entendre meaning either hilarious delirium or delirious slave (Hilarus was a gladiator owned by the Roman emperor Nero). The idea is that laughing  through anything—up to and including decapitation—is the best revenge against one’s decapitators, figurative or otherwise.

The festival itself further destroys the cliché that Arab culture is a desert of bloody austerity. If the headless clown wasn’t enough, consider the accompanying video by Lynda Thalie, a Montreal singer who originally hails from Algeria. It is a five-minute carnival of painted faces and naked flesh set to Arab strings­—a Muslim fundamentalist’s nightmare, performed by an Algerian woman. The lineup also includes Iraqi-Montrealer rapper Narcicyst, who is as outspoken about Islamic fundamentalist regimes as he is of what he sees as the West’s enabling of them.

The festival’s theme also exposes another unspoken truth: that the critiquing of religious fundamentalism is most visibly the domain of non-Arabs. It makes it all too easy for apologists of, say, the murder of Charlie Hebdo’s cartoonists to wrap themselves in the veil of Muslim persecution. The FMA’s headless clown lays waste to this specious argument. It is heartening to see Arabs—namely, the Muslims, Berbers, Christians and Jews who comprise the FMA team—critique the very same fundamentalism. (An important aside: the clown bleeds words and musical notes, not blood.)

Quebec has had a tumultuous few years in regards to Muslims and other religious minorities. After the Parti Québécois’s electoral attempts to remove all religious symbols from the bodies of its public servants in 2013, the newly elected Liberals went to another absurd extreme, by introducing a bill that many legal experts say would make it illegal to critique any organized religion. Both are shoddy in their own way. Thankfully, both failed to become law.

By laughing through his own misery, the headless clown is a reminder that the best line of attack against fundamentalism isn’t through laws or government decrees. It’s as simple as embracing the culture and deriding the extremists who would dare try to smother it.