An NDP platform for (almost) everyone 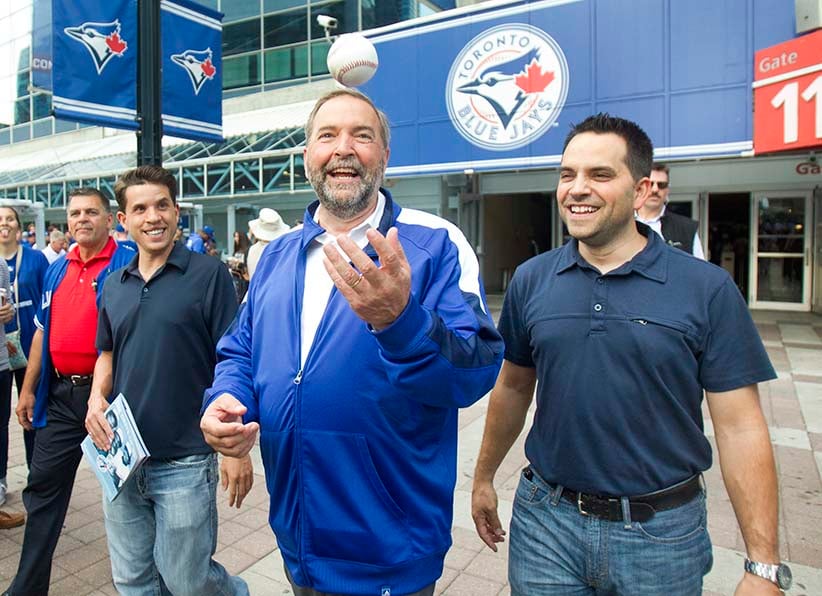 NDP Leader Tom Mulcair arrives at a Toronto Blue Jays game with his sons Matt and Greg prior to the start of an AL baseball game against the New York Yankees in Toronto on Aug. 14, 2015 (Fred Thornhill/CP)

Unveiled at Montreal’s Palais des congrès near the end of the electoral campaign, the NDP policy platform has a chicken-in-every-pot feel to it—complete with several requisite “first 100 days” promises. Unless you’re big business or an income-splitting family (in which case you probably aren’t voting NDP anyway), there is almost something for everyone here. In this way, it is as much a campaign tool as a platform, geared to both the diehard and would-be NDP voter. The cost of the party’s promises of new investments: $34 billion over four years, with a promise of balanced budgets.

One of the largest ticket items is the party’s National Childcare Plan, with a cost of $6.2 billion over four years. The plan, to have child care in every province for no more than $15 a day, is oddly reminiscent of former prime minister Paul Martin’s blueprint, aborted upon his defeat in 2006, and which Michael Ignatieff adopted for his attempt at the job in 2011.

On health care, the NDP pledges to develop a universal drug-coverage system across the country. Like universal subsidized daycare, the drug plan is similar to what Quebec already has. It would cost roughly $2.6 billion over four years. There are promises of 200 new medical clinics across the country and 7,000 new doctors and other health care professionals. As health care is a provincial jurisdiction, the earmarked money would be given to provinces to spend.

As pricey as it may sound, the NDP’s infrastructure plan pales in comparison to the sheer dollar figures of the deficit-inducing, 10-year, $125-billion Liberal plan. It’s part of the Mulcair-era NDP gamble: Canadians, his team has posited, don’t love improved infrastructure as much as they hate going into debt. The biggest ticket item in the NDP plan is a $3.7-billion, four-year plan to “close the municipal infrastructure gap”—the chasm between what the country’s infrastructure was built to handle, and what it actually sustains today. (A 100-m drive on Montreal’s Décarie Expressway, which officially opened to traffic in 1967, is sufficient explanation.)

An NDP government promises to restore home mail delivery, crack down on ATM fees and limit credit card interest rates. It would reduce the retirement age to 65 from 67. It would electrify the federal government’s fleet of vehicles. (There is also $12 million earmarked in 2016-17 to “roll out electric-car-charging stations.”) It would also reinstate the federal minimum wage—though this is less impressive than it sounds, given that wages are set by the provinces. Only employees of the federal government would qualify; one analysis found that 95 per cent of Canada’s minimum-wage earners wouldn’t qualify.

Muclair has spent a significant amount of campaign time on the issue of Indigenous communities. The NDP platform bears this out. A national inquiry into the 1,200 missing and murdered Indigenous women would be called within 100 days.

The party would pay for all of this through a series of savings and new revenue measures that would, according to NDP figures, generate nearly $7.2 billion in the 2016-17 fiscal year alone, and roughly $36 billion over four years.