An unintended symbol of urgency in flooded Montreal

Image of the Week: Residents of Ile Bizard, Que. devised a quick, smart solution to overwhelmed sewers. But like most responses to floods across Canada, it was temporary 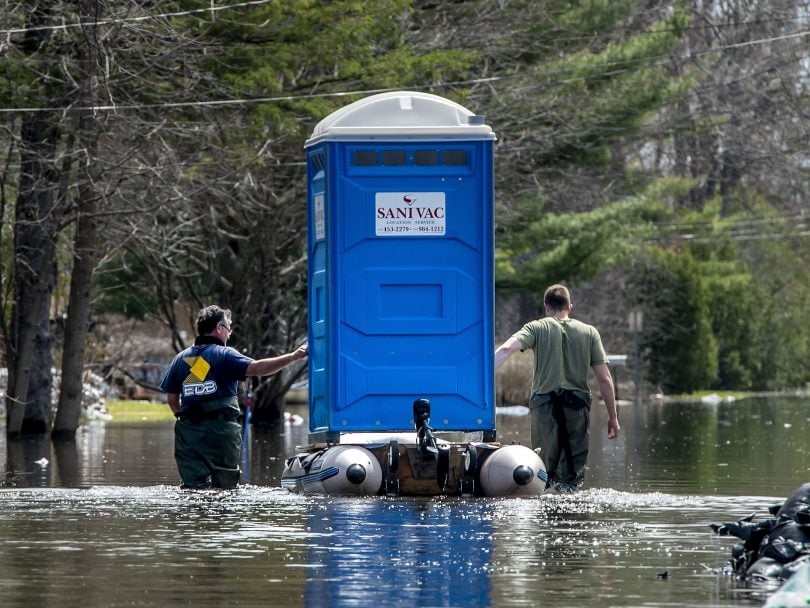 Residents of Holy Street in Ile Bizard west of Montreal, float a porta-potty down their street. The street has not been evacuated, yet its inhabitants cannot flush their toilets. (Peter Mccabe/CP)

By all appearances, the floods that ravaged parts of Quebec in late April have calmed significantly. Water levels are dropping. The army is relieving some of the soldiers it sent to the scene. Montreal lifted its state of emergency. But try explaining that to the residents of Île Bizard, a small island west of Montreal. Basements in homes across Joly Street, on the island’s south shore, have flooded repeatedly this week—a frustrating situation exacerbated by the fact that folks there can’t flush their toilets because locals sewers are overwhelmed. “We’re already tired like crazy because it’s been two weeks in the water,” one local told Global News. “Now we can’t even use the toilet anymore, we can’t even take a shower.” One quick solution? A floating porta-potty being pushed down the street, offering residents a small form of relief. But there’s no adequate answer for the underlying problem, which demands an urgent and comprehensive strategy. Most Canadians living in flood zones are unaware of their geographic misfortune. Outdated infrastructure, water bodies backfilled so they could be transformed into streets, climate change and inaccurate government-maintained flood maps have swirled together into a maelstrom of seriously heightened risks. The recent floods quickly broke records as the worst in Quebec’s history, forcing thousands to evacuate and causing millions of dollars in damage. It’s not a problem any level of government can wash their hands of—especially if they can’t run the taps.

FILED UNDER: floods Ile Bizard Image of the week