Another WestJet flight receives a bomb threat, lands in Saskatoon 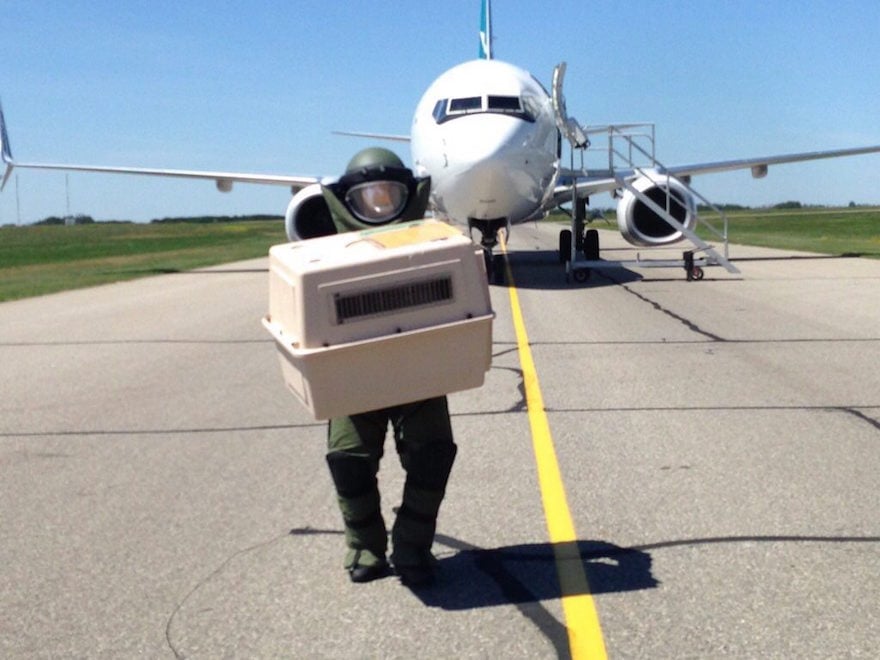 Saskatoon Police Service Const. Matt Maloney, of the Explosive Disposal Unit, due to high heat removes two cats from a plane during an ongoing investigation into a bomb threat in Saskatoon, Sask., on Saturday, June 27, 2015. A WestJet flight bound for Edmonton from Halifax was diverted to Saskatoon on Saturday morning following a bomb threat. THE CANADIAN PRESS/HO – Saskatoon Police Service

SASKATOON – For the fourth time in less than a week, a Canadian passenger jet has had to make an emergency landing because of a threat made against it.

On Tuesday night, WestJet took once again to Twitter to say one of its planes had received a bomb threat.

“We’ve landed safely in Saskatoon,” tweeted passenger Jordan Stone of Vancouver, who posted pictures of passengers walking down a long stretch of runway away from the plane. “Authorities are well prepared. Everyone calm.”

Flight WS323 was travelling from Toronto to Saskatoon and while it managed to land at its destination safely, the 113 passengers and five crew members were forced to disembark on the tarmac.

This time it was via stairs — when a WestJet flight en route from Edmonton to Toronto was forced to divert to Winnipeg on Monday night because of an unspecified threat, passengers had to jump down evacuation slides.

Last Saturday morning, a WestJet flight from Edmonton to Halifax landed in Saskatoon after police said a call had been made claiming an explosive device was on board. And last Thursday, St. John’s International Airport was temporarily closed because a note was found in the washroom of an Air Canada flight that authorities considered a potential bomb threat.

In the last three cases, searches of the aircraft unearthed nothing suspicious. So far, police have not made any arrests in any of the cases.

In Saskatoon on Tuesday, passengers were taken on buses to the air terminal at John Diefenbaker airport to be questioned by police — a procedure that has become standard with each new incident.

The aircraft itself was being kept away from the terminal as a precautionary measure.

Saskatoon police said they were notified about an “alleged explosive device” on the aircraft.

On Tuesday morning, Sgt. Bert Paquet wouldn’t specify the nature of the threat against Flight WS422 but said it “came from outside the plane or the flight itself and we are looking to establish the origin of the call and the person responsible for it.”

RCMP were working with other police agencies to determine if the incidents are related, Paquet said.

WestJet officials have said little about the string of incidents, including whether there are frustrations or fears about any potential impact on business or customers.

“We’re going to deal with the response,” Robert Palmer, public relations spokesman for the airline, said in an email Tuesday night. “Not going to venture anywhere else. Focus is on caring for our guests and crew members (again).”