Answering the call after Paris? It's not that simple.

Terror attacks offer a complicated paradox. This is a time for hard decisions. 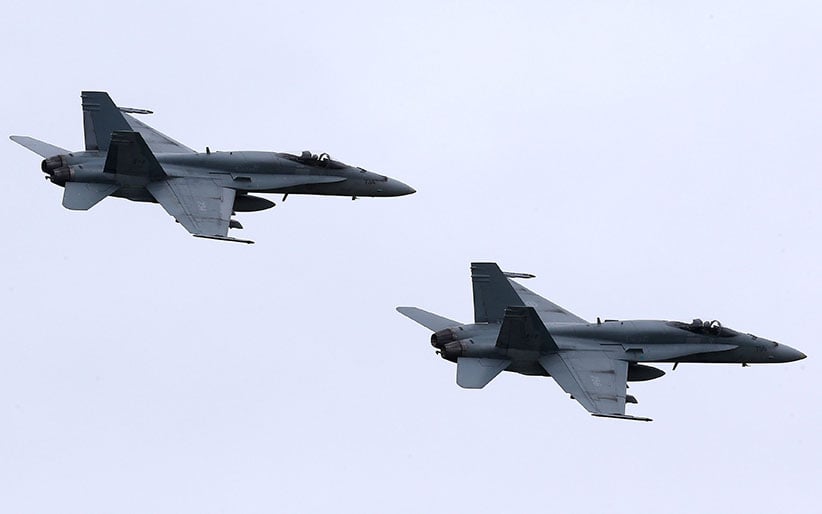 In the wake of the Beirut and Paris bombings, the military hawks in the Conservative party are circling so thickly above Justin Trudeau’s head that they threaten to block out the light from those sunny ways. Interim leader Rona Ambrose and potential leaders such as Jason Kenney and Saskatchewan Premier Brad Wall are urging Trudeau to renege on his promise to pull out the six CF-18 fighters jets from the combat mission and get real about the security threat posed by the incoming 25,000 Syrian refugees. Tory MP Candice Bergen says she is “sickened” and “embarrassed” by Trudeau’s position.

But what strategic options are they actually proposing? Beyond fewer refugees and more bombs, there isn’t much. The problem with blocking out the light is that the hawks can end up flying around in the dark without knowing where they’ll land.

The most bizarre contribution comes from former defence minister Peter MacKay. “To do nothing is no longer an option, and incremental efforts serve no further purpose,” MacKay wrote in the National Post. Doing nothing is no longer an option? It’s one of those political admissions that leaves you gasping. In urging Trudeau to escalate the mission against ISIS, MacKay openly dismisses the very mission he sold to the Canadian public as useless, or, at best, as an “incremental” effort that serves no purpose. The criticism of the Conservatives’ foreign policy was always that they pulled on size 14 combat boots for size 2 feet, but MacKay has still found a way to step on his own toes.

To Conservative hawks, every year is 1939 and every military decision a binary choice: You can either be a Neville Chamberlain appeaser or a Churchillian warrior. That’s why the immediate answer to every threat starts, and often ends, with the barrel of a gun.

The world, however, is not that simple. The first lesson of leadership is to distinguish between hard choices and false choices. Politics often creates false choices in order to gain political ground, while leadership often demands hard choices that can lose political ground.  The difference between the two will define the first part, and maybe the entire mandate of the Trudeau era.

Security or refugees? Total war or total abandonment? Those are false choices. The hard choices lie somewhere in the middle: how to bring in refugees and still make the system secure.

MacKay argues it is Canada’s duty to “answer the call” from French President François Hollande and go to full-scale war against ISIS. But what does that really mean? The air strikes so far have been slowed down by a dearth of targets, not a lack of intention.  Does he mean it’s time to invade Syria with a ground war? Answering the call is not that simple.

Terror attacks pose a deadly paradox, because they change both everything and nothing. On one hand, any clear-thinking leader must regard the gruesome slaughter by an amoral terror group as a renewed call to action in the name of security and international law. The imperative to act is real and, on this, Conservatives are right.

On the other hand, nothing has changed the same thorny questions about ISIS that have plagued us for years. Post-Paris, there is no new, clearer strategy for how to destroy ISIS and stabilize Syria. Who will govern the failed state if both ISIS and Syrian President Bashar al-Assad are merely opposite edges of the same murderous sword? After the war in Libya, the West learned it’s not enough to topple a leader with air strikes, then abandon a country. Libya is now a failed state where the terror hydra regrows its many heads. But the war in Iraq revealed that occupation can descend into quagmire. It is this paradox, if not negotiated carefully, that can swallow up leaders, as Iraq did to Tony Blair. It can turn visions of peace into violent insurgencies, internationalists into appeasers, or hardened realists into patron saints of lost causes.

Justin Trudeau still plans to pull out the CF-18s, but promises to enhance the training mission, maybe by up to 1,000 soldiers. He is keeping his promise to accept 25,000 Syrian refugees, but, in talking to his health minister, Jane Philpott, I get the sense that security concerns will force the government to drop its end-of-the-year deadline. That would be prudent.

Liberals—or better, Liberalism—take issues of security just as seriously as Conservatives or Conservatism, and are no less inclined to use hard power alongside the soft power Harper so loathed. Liberals put Canada at war in Afghanistan, and it was Justin Trudeau’s father who invoked the War Measures Act. But the fresh-faced cabinet has to be careful not to trip on their own sunbeams and selfies, as the new defence minister just found out.

Eight days before the terror attacks on Paris, Canada’s Defence Minister Harjit Sajjan, a former solider with three tours of Afghanistan under his belt, assured Canadians the danger level was low. “ISIS is a threat, no doubt about that,” he blithely told the CBC. “Should we fear it? No.”

The timing of his remarks could not have been worse. Just as awkward are Liberal defenders who wrongly dismiss Canada’s CF-18 jets as mere tokenism and regard taking them out of theatre as irrelevant. Liberal internationalists want the world to function through multilateral institutions and coalitions, especially superpowers such as the U.S., so they must not talk down the military contribution of middle powers such as Canada when it serves their political purposes. They can’t have it both ways.

If there is any substance to Trudeau’s claim that Canada really is back on the world stage, it will mean hard decisions both to take in more refugees and to put our men and women in harm’s way. After Paris, there will be blood, more of it. Trudeau will prove to be a genuine leader if he does not spill it in vain.