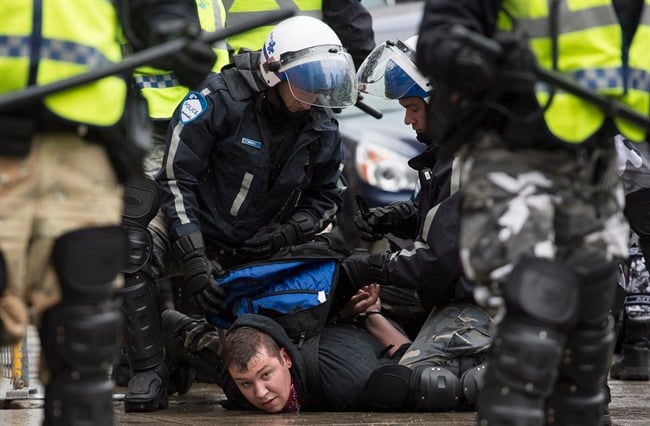 An anti-capitalist demonstrator is detained by police during a May Day protest in Montreal, Sunday, May 1, 2016. (Graham Hughes/CP)

The afternoon march began peacefully but degenerated after about an hour, when police say protesters threw projectiles and broke windows at a downtown police station, prompting police to fire off tear gas canisters.

Red and orange-coloured smoke filled the air as protesters dispersed into small groups and ran in different directions, some being chased by police.

Police reported about 10 arrests and one minor injury as of 5 p.m, although small protests were ongoing in the early evening.

At least two groups converged and made their way to Sainte-Catherine street, bringing traffic to a standstill on one of the city’s busiest thoroughfares.

Police presence was heavy and included officers on horseback and on bicycles as well as dozens who walked alongside the demonstrators.

In a statement, the Montreal Anti-Capitalist Convergence said the goal of the event was to “disrupt commercial activity dominated by the local bourgeoisie.”

One protester, Marguerite Garepy, said she was marching to denounce the capitalist system, which she describes as being more focused on profit than on people’s well-being.

She said she was there to call for free education, a better public health system, responsible resource exploitation and a higher minimum wage.

“Someone working at $10-something an hour, they can’t get by,” she said. “It’s not liveable for poor people.”

Earlier in the day, a union-organized protest was held without a hitch.

Its purpose was to denounce government austerity measures and call for higher wages and measures to reduce social inequality.

Many of the organizers also called for Quebec’s minimum wage to be raised to $15 an hour.

More than 80 people were arrested in the anti-capitalist protest last May 1.

FILED UNDER: May Day Montreal