‘We were immediately cast as enemy aliens’

Bedridden with a bad burn in 1934, four-year-old Raymond Moriyama spent his days observing a construction site across the street from his Vancouver home. “Once in a while, this good-looking young guy would come along with a blueprint under his arm and a pipe in his mouth,” he says. The workers would gather around, nod and smile. “Who’s that guy?” he asked his father, who replied, “He’s an architect.” And with that, Raymond knew what he wanted to do with his life.

Eighty-two years later, Raymond’s designs include the Ontario Science Centre, the National War Museum in Ottawa, the National Museum of Saudi Arabia and dozens of other celebrated structures across the globe. Between his bold boyhood assertion and becoming one of Canada’s most famous architects, however, there is a story of tragedy, perseverance and hope.

It begins with the Japanese bombing of Pearl Harbor. “We were immediately cast as enemy aliens,” Raymond recalls. His father, a pacifist, was sent to a POW camp in Ontario. He had to resist the contradiction: Canada was fighting for freedom abroad and unjustly imprisoning its own citizens at home. “I was really proud of my dad,” Raymond says. “I said, I had to do that with my own life, too.”

FROM THE ARCHIVES: In 1991, Maclean’s looked back on Canada’s “Legacy of shame,” regarding Japanese-Canadians

In his father’s absence, 12-year-old Raymond was left to run a nearly empty hardware store—stripped of its wares by the RCMP—with his pregnant mother and two younger sisters, under the constant surveillance of an officer who was “absolutely convinced we were going to bomb anything we could see.” Raymond still can’t shake the image of the officer pointing his long finger in his face, saying, “If we see you outside after sunset, you will be shot.”

Not long after that incident, Raymond’s mother and youngest sister disappeared for nearly two days—taking $5 of the family’s $34.92 with them—leaving Raymond and his other sister alone in the back of the empty store. “It was like living in a nightmare,” he says. When his mother finally returned the following afternoon, she was thinner. “Obviously, she lost the child,” Raymond says. “We never asked her about it.”

With nowhere else to turn, Raymond’s mother brought the family to a Japanese-Canadian internment camp in Vancouver’s Hastings Park, one of the many they’d inhabit throughout the war. They were given four thin mattresses and directed to a single-horse stall. “Our eyes went to one corner of this stall,” he remembers. “We saw thousands of bugs crawling. That was the lowest point in my life.”

The men in another camp teased Raymond about the scars on his head, neck and back—remnants of the childhood burn—so he snuck away to bathe in the Slocan River instead. “It was a deep freeze, but it was better than hot tears.” With six spikes, nails, wood and an axe he’d secretly taken, Raymond built a treehouse to keep watch. “It became a place of solitude and peace,” he says. “It became my university.” Perched on his platform, looking out to the Rockies, he wondered, “How come Canada, which has such wonderful nature, has such ugly people?”

When the war ended, Raymond’s reunited family moved to Hamilton, where he worked in a pottery factory. Ambidextrous, he could finish his work quickly; his boss encouraged him to study with the extra time. As a result, he finished at the top of his class in high school. At graduation, Raymond’s father handed him a note that read, “Into God’s Temple of Eternity, drive a nail of gold.” “He wasn’t asking me to design God’s temple or build it, just to put one nail into it, one forged of gold,” Raymond says. “That poem propelled and sustained me through life.”

Raymond studied architecture at the University of Toronto, where he remet Sachi, an old friend who had lived on his street in Vancouver. On their second date, he told her he’d marry her. “She never believed me,” he says with a laugh. They’ve now been married 60 years.

In the summers, Raymond worked for a favourite professor, Eric Arthur. But when Raymond decided to start his own firm years later, Arthur was doubtful he’d survive for more than six months. Raymond asked him why. Arthur gave four reasons: Raymond was too young, there was a recession, he had no capital and he was a “goddamn Jap.” Raymond didn’t take offence; he knew Arthur was simply firing him up as motivation. He told Arthur, “I believe Canadians are better than what you say.” 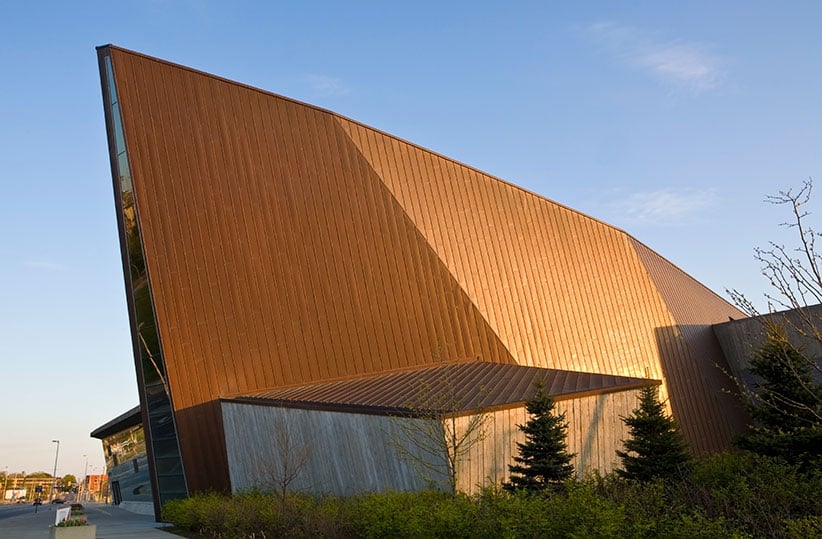 Moriyama, who designed the National War Museum, believes you have to think in terms of inclusion (Klaus Lang/Getty Images)

Raymond’s firm secured a few small jobs—cottages, gatehouses, golf-course buildings—but rejected more than it took. “My aim was for truer democracy, equality, inclusion,” he says. “Fifty or 60 years ago, that was not the most popular thing to be pushing for. People didn’t know what the hell I was talking about.” When the province phoned Raymond, then 33, to invite him to design the Ontario Science Centre, he initially refused; he thought they’d confused him for another architect. They called back and said, “Mr. Moriyama, I think you should come down here. This may change your life.”

It did. The massive project shot Raymond’s obscure four-man firm into the Canadian architecture limelight, and other projects soon followed: Ottawa City Hall, the Canadian Embassy in Japan, the Bata Shoe Museum. When Raymond retired, he left the firm—and its philosophy—to his son. “Architecture is not about putting up a pretty structure; it’s about making contributions to humanity,” he says. “You have to think in terms of inclusion. If I were a 76-year-old Ukrainian woman, how would I feel? If I were a 32-year-old German, how would I feel? How about a Middle Eastern woman with a baby in a buggy—how does she feel? You make yourself into a crowd of people.” — Luc Rinaldi