Thirty years later, 'Arctic Comics'—busting myths and revealing what it means to be Inuit—is back 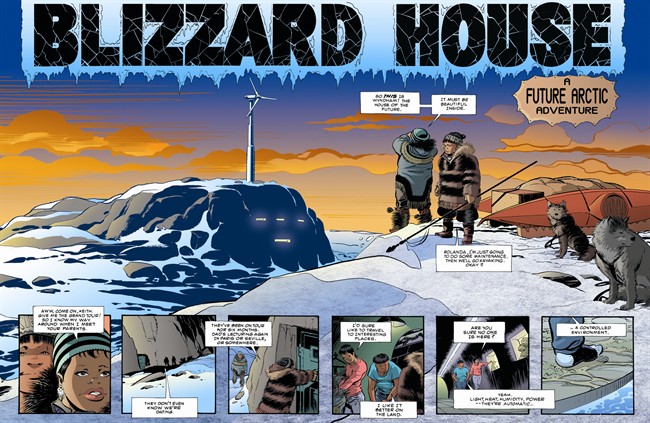 Thirty years after amazing and entertaining audiences at Expo 86, “Arctic Comics” with its mythological heroes, tall tales and meditations on what it means to be Inuit is back. THE CANADIAN PRESS/HO-McNally Robinson Books

It was one of the most successful cultural exports from the North since someone suggested southerners might like those little carvings.

Thirty years after amazing and entertaining audiences at Expo 86, “Arctic Comics” with its mythological heroes, tall tales and meditations on what it means to be Inuit is back.

“There’s no shortage of stories up here,” said Nicholas Burns, one of the artists behind the 88-page, full-colour comic book being published this month.

The first “Arctic Comics” began almost as a lark when the Northwest Territories government realized it would need northern material to sell at its pavilion at Vancouver’s world party.

“I put in a proposal saying I’ll do up this comic and do up stories of Inuit past, present and future and they thought it was a great idea,” said Burns, who was then living in Rankin Inlet, now part of Nunavut. “I essentially self-published and sent them down and they sold like hotcakes.”

The N.W.T. pavilion turned out to be one of the hits of the fair. Eager visitors snapped up 60,000 copies of “Arctic Comics.”

“It was round-the-block lineups all the time.”

The plan was to do it again for Expo 92 in Seville, Spain. But the team missed the publication window and “Arctic Comics” languished.

With the same past, present and future focus as the original, the new “Arctic Comics” features a trip with a legendary Inuit Ulysses in “Kiviuq versus Big Bee.” The fantastical adventure of the long-ago traveller, drawn from Inuit myth, was written by the late Jose Kusugakm, one of the founders of Nunavut, and illustrated by Germaine Arnaktauyok, who drew the drum dancer on the back of a special-edition toonie.

Dauntless RCMP Const. Lucy Puqittuq and her loyal dog Vincent make an appearance and the theme of southerners inventing their own version of the North comes in for some teasing in “Film Nord.”

And then there’s Michael Kusugak’s “On Waiting,” a setting of a poem about a boy lying on a beach waiting for a seal. Almost nothing happens — except for everything.

The boy dreams, watches the tide and thinks of his dead grandfather playing walrus-head soccer with other spirits among the aurora’s dancing lights.

“There have been so many misconceptions about Inuit for a long, long time, ever since people started writing about us, that we just lie around and wait until we’re hungry again and go get another (seal),” said Kusugak. “A simple, hand-to-mouth existence.

“I thought it was time we started producing things that tell you what it really feels like to be there.”

Burns agrees that the biggest audience for “Arctic Comics” is likely to be in the south.

“I thought European audiences in particular — they romanticize First Nations communities and peoples and culture. But most people in southern Canada have very little knowledge or understanding of the North either.”

“Arctic Comics” will be first published in both French and English. Burns said he looked for a publisher that could produce an Inuktitut version, but the sales were unlikely to justify the expense.

But he added an Inuktitut version will follow, funded by revenue from the other editions.

“I’m going to be fascinated by the responses we get from the North.”