The game-meat crisis most Canadians have never heard of

Chronic wasting disease in deer, elk, reindeer, caribou and moose is on the rise in three Canadian provinces. No human has yet been infected, but are governments taking the threat seriously? 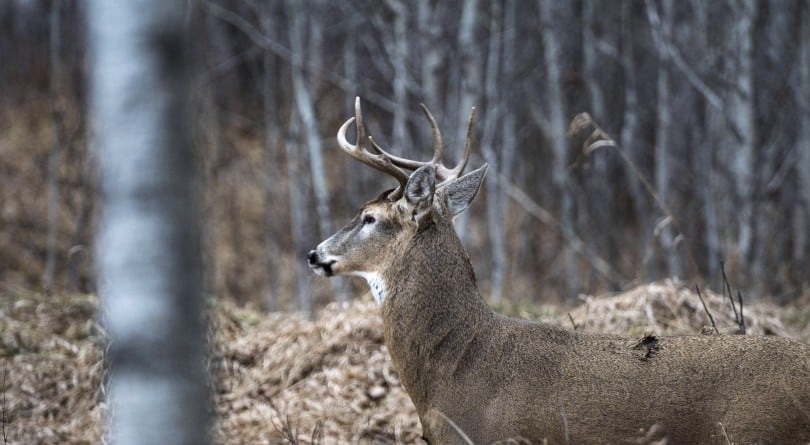 A deer in Saskatchewan. (Jim MacDonald)

Since 2010, the Saskatoon Wildlife Federation’s “Hunt 4 Hunger” program has donated some 32,000 lb. of frozen, ground game meat—deer and moose—to the Saskatoon Food Bank. It’s accepted with gratitude, says Laurie O’Connor, the food bank’s executive director. The facility serves 19,000 people per month and doesn’t generally have access to high-quality protein: “It’s great to be able to offer it during hunting season,” she says.

Over that time frame, however, another form of food-chain vulnerability has touched the much-lauded program: rising concerns about the safety of game meat due to chronic wasting disease (CWD), a fatal, infectious prion illness that affects deer, elk, reindeer, caribou and moose. First reported in Colorado in the ’60s, CWD was classiﬁed a transmissible spongiform encephalopathy in 1978, making it a sister disease to scrapie in sheep; bovine spongiform encephalopathy, or “mad cow disease,” in cattle; and Creutzfeldt-Jakob disease in humans. Often sensationalized as “brain-eating zombie deer disease,” CWD causes a horriﬁc demise—weight loss, fatigue, clumsiness, excessive thirst, drooling, bursts of aggression before collapse and eventual death. Incidence is rising in Europe, in 26 U.S. states, and in Alberta, Saskatchewan and Quebec. It’s known to spread animal-to-animal, soil-to-animal, mother-to-offspring and from exposed plants or other surfaces including tools or surgical instruments. (Prions are extraordinarily resilient, known to withstand powerful disinfectants, radiation, freezing and heat above 590° C.)

No human case of CWD has been identiﬁed, but transmission to humans cannot be excluded, according to an ongoing study on macaque monkeys led by Stefanie Czub, head of the virology section at the Canadian Food Inspection Agency. The primates developed CWD when fed muscle meat from CWD-infected deer that appeared healthy. Preliminary results in 2017 prompted a Health Canada advisory that “CWD, under speciﬁc experimental conditions, has the potential to cross the human species barrier.” Health Canada, like the World Health Organization, recommends people not eat meat or other parts of a CWD-infected animal (deer antler velvet, a popular nutritional supplement, can also contain CWD prions, according to the Centers for Disease Control and Prevention).

READ MORE: Canada can still save these animals—but the odds are long

The government of Saskatchewan’s “Chronic wasting disease information for hunters” web page advises that “hunters do not eat, or distribute for human consumption, the meat or other parts from animals that have not been tested or that are found to be CWD-infected.” Government testing of an animal’s lymph nodes or brain stem for CWD can take up to eight weeks and is free. It’s also voluntary. The website emphasizes the danger posed by CWD in its instruction for meat and other parts from a CWD-infected animal to be “double-bagged and taken to a permitted landﬁll to prevent consumption by animals and minimize environmental contamination from CWD prions.”

All meat donated to the food bank has been CWD-tested, Michael Kincade, the Saskatoon Wildlife Federation’s executive director, tells Maclean’s. Most comes from animals seized or harvested by provincial conservation ofﬁcers, which is tested. Meat from animals received from hunters is ground, then set aside pending assurance from the hunter—on an honour system—that the animal tested negative. Equipment is sanitized after each animal is processed, Kincade says. So far, there have been no positive CWD cases.

CWD has been a big issue for hunters for a number of years, Kincade says, though there is no mention of CWD on the federation’s website. “There still isn’t any proof that it can be transferred to humans or hurt us,” he says, allowing he’s not familiar with the primate study. “We’ve probably been eating CWD-infected animals for a while, but there’s nothing to prove that, either. There doesn’t seem to be much you can do at the moment.”

RELATED: Why animals should be given the same legal rights as humans

Surveillance testing of some 2,000 deer by the Saskatchewan government over the 2018-19 hunting season found 349 CWD cases and nine new zones of CWD infection, says Iga Stasiak, a provincial wildlife health specialist. (A January 2019 Alberta government report found 147 cases of CWD in more than 2,300 animals.) Testing is not 100 per cent conclusive, with false negatives, adds Stasiak, who notes the government is working on strategies to reduce transmission.

CWD needs to be seen as a crisis now, says Darrel Rowledge, a former forester and director of the Alliance for Public Wildlife, who has been studying—and raising alarm—about CWD for more than two decades. He itemizes the risks beyond species extinction—to agriculture, to First Nations communities, to food security, to economies, to international trade. Last fall, Norway announced it wouldn’t accept hay or straw from North America unless it’s certiﬁed as coming from a province or state that does not have CWD.

“Waiting until people are infected or allowing the levels of consumption that we are allowing is untenable,” Rowledge says, calling CWD “the largest, most contagious, most persistent bio-massive infectious prion in global history” given its many transmission modes. The U.S. declared a state of emergency over it in 2001, he says. Canada issued an expert scientiﬁc report in 2004. Yet protocols governing how live animals and product are moved from game farms and how hunters move carcasses haven’t changed: “We’re not containing this epidemic. It’s a violation of basic principles of science and epidemiology, it’s a violation of the responsibility of government.” It’s also a concerning case study in mounting food-chain vulnerabilities. We need only consider that CWD-infected animals are known to be the easiest for hunters to track and kill, making them the most likely to end up in the food chain.