Are public libraries an essential service? 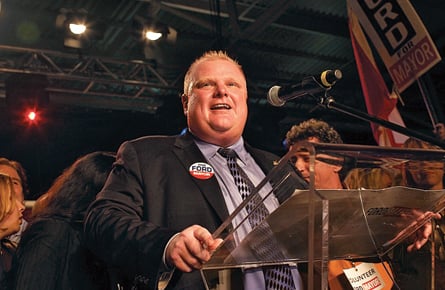 At 9:30 am on Thursday, July 27th, Toronto’s city council, and roughly two-hundred regular people, packed into a board room at city hall to “discuss” Toronto’s latest greatest angst-ridden cause célèbre: the proposal by Rob Ford to trim the city’s $774 million budget shortfall, via the “rationalization of Toronto’s public library footprint.” Which is to say, closing libraries.

Over the next 24 hours more than a hundred civilian deputations would be made, directed mainly at the mayor, who swiveled in his chair, downed the occasional Red Bull, and made not-so-comfortable eye contact with angry disputants. “Save the libraries” and “Shame” were among the more popular epithets slung at Ford, whose fiscal mission—to distinguish Toronto’s “need to haves” from its “nice to haves”— has clearly put neighbourhood libraries in the latter category. His Worship’s older brother Doug—also a city counselor—helpfully poured gasoline on the library fire, making an unlikely opponent of Canadian author and T.O. resident Margaret Atwood by asserting that a) there are more libraries than Tim Hortons outlets in his neighbourhood (there aren’t), and b) he doesn’t care what Atwood has to say about his erroneous assertions because he doesn’t really know who she is.

In response, Atwood has galvanized thousands on Twitter, pushing an ever-growing “save the libraries” petition. The number of “if-Doug-Ford-keeps-the-library-open-maybe-he’ll-learn-how-to-read” jokes is similarly on the rise. Conceding that they’re literate, it’s always possible that the Fords, who seem pretty comfortable with their Neanderthal-and-proud-of-it image, are completely wrong on this issue. Still, the issue begs a broader question: if the Fords are so severely misguided, why have municipal governments across the country (as well as the federal government) cut library funds—and the librarians that accompany them—consistently, year after year? The Ford brothers may be the latest people to disquiet librarians, but they certainly aren’t the first.

Last year, the Vancouver Public Library almost lost its special collections department (practically a shrine among historians) when the city cut $1.4 million from its budget by 2011, reducing hours and putting librarians out of their jobs. As for school librarians—Nova Scotia no longer has any, and B.C. has laid off nearly all of its own, in the apparent belief (according to the Canadian Library Association) “that given today’s technology, the teacher-librarian no longer has a role to play in the school.” Calgary’s municipal government considered cutbacks to its public libraries when they faced a $60-million budget shortfall last year, threatening to reduce hours and eliminate programs for seniors and children. It’s hard to believe that every one of these examples was orchestrated by cynical politicians who can’t read good.

So why are libraries under siege? The general consensus among the library-savvy in this country echoes the view of one former public librarian and professional researcher on Vancouver Island I spoke to:

“The public library doesn’t perform its traditional mandate anymore because information and how it’s accessed has changed so rapidly. Also, resources are spread too thin among branches, when they should be merged rather than duplicated. And a lot of librarians currently perform the duties of social workers and teachers, looking after latchkey kids when social workers should be monitoring them. We should consolidate public libraries and community centres—blend their budgets staffs—so they can do their jobs much more efficiently.”

In other words, libraries are on the chopping block because they can’t keep up with the times, and because they’re duplicating services performed by community centres. The proposed solution to this is to a) close inefficient and under-circulated branches and b) consolidate the rest with community centres. Somehow, it’s much easier to buy the diagnosis than the cure.

The Brittania Community Services Centre in Vancouver is a perfect example of the supposedly efficient model—it houses a public library, child-care facility, and youth centre. However, there is one key benefit it can’t provide: proximity—the practical and cultural efficiency of having a neighbourhood library. Walking distance is key. Libraries should be local hubs, not hubcaps latched onto larger, more central facilities. Even Toronto city counselor and transit chair Karen Stintz—usually an ally of the Ford brothers—has spoken out against permanent library branch closures, telling the CBC’s Matt Galloway last week that “the availability of resources in close proximity is of real value…certainly the library can find the efficiencies without closing any branches in the community”.

But the Fords don’t want to find efficiencies. They want to realize them, by closing or consolidating a service which is simply “nice to have”: the neighbourhood library. What the Fords fail to account for—and where politicians miss the mark every time a neighbourhood library closes its doors forever—is that proximity doesn’t only serve the dedicated reader who would seek out a public library no matter its location, but the student or immigrant whose interest in culture is piqued accidentally. I walked to the local library after school, not because I loved to read, but because it was there.

When libraries are in walking distance, people frequent them who normally would not. And while technology has changed the way we consume information services, it’s unlikely that an increase in Kobo sales and Wikipedia searches is going to stop an adult ESL student from taking out the required books to pass his or her TOEFL (Test of English as a Foreign Language), or a retiree from picking up the next Nora Roberts installment. “Our libraries are full,” says Counsellor Janet Davis, also a member of the Public Library Board. “We have the highest per capita circulation in the world. We shouldn’t be considering how to close libraries or cut hours—we should be considering how to expand them.”

In the end, though, this really isn’t a “find the gravy” core service issue—as governments purport—but a core values issue. When my father was a kid growing up in North Toronto, his neighbourhood lacked a library, so a city-funded bookmobile visited a local plaza weekly instead. Libraries then weren’t niceties, but necessities. Today they offer much more than reading material—most critically, they provide Internet access to those who can’t afford it. Chances are slim, if and when the Ford brothers “rationalize the library footprint,” that they’ll provide the modern equivalent of my dad’s bookmobile. There will be no “Internet Access mobile” or subsidized bus pass for the purpose of picking up your TOEFL study materials.

The irony is that a government fixated with saving money and creating jobs is jeopardizing an institution that allows easy access to precisely those things: “I’m no taxpayer,” a fourteen year old Scarborough student named Anika told mayor Rob Ford in her 4 a.m city council meeting deputation, weeping as she did. “But when I use the computers in the library to do my homework I’ll be able to get a good job someday…and when the day comes to pay taxes I’ll be glad that years before people paid the extra taxes to keep the system going, so I could pay taxes for the kids who depend on the computers in my time.” Unfortunately for Anika, the operative word in her deputation probably wasn’t “depend”, but “taxes”—something a service-slashing municipal government finds even scarier than too many literature repositories. And until that changes we may as well say goodbye to local libraries. Or hello to story time at Tim Hortons (Internet access not included).